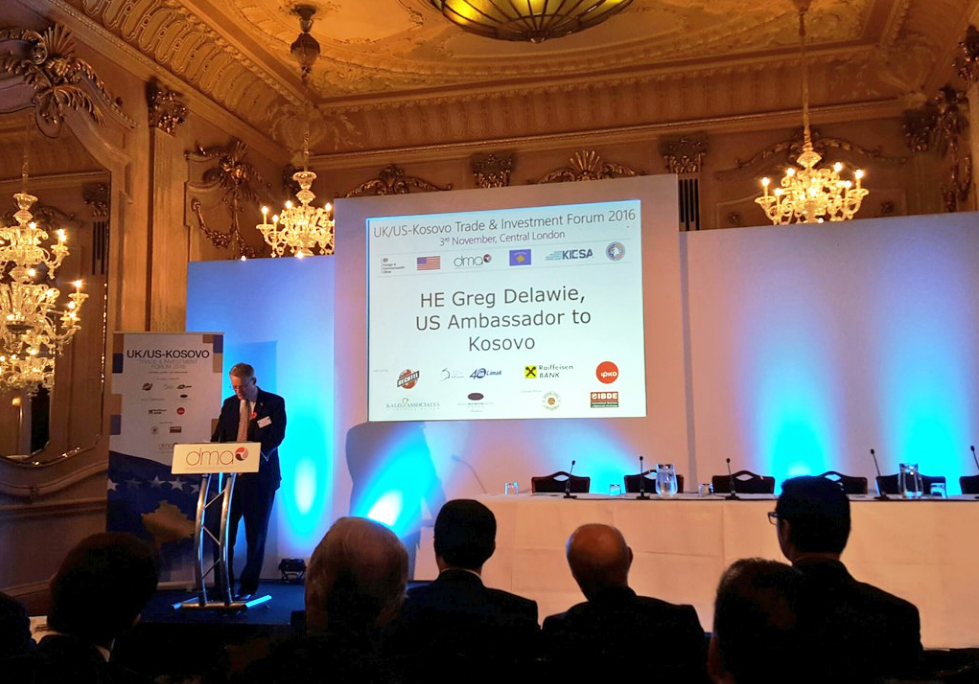 Good morning.  It is a pleasure to be here with you today, and to provide you with a U.S. perspective of Kosovo’s investment climate and opportunities for potential investors.  This beautiful conference room reeks of history and power, and is a reminder that Great Britain has existed for centuries.  Today we will be speaking primarily about a country that has been independent for just a few years.

Since its independence in 2008, Kosovo has made substantial progress in establishing and developing free market policies and legislation, and in improving its business climate.  These steps were recognized in the World Bank’s just-released Doing Business 2017 report, which shows Kosovo moving four places up the rankings this year, from 64 to 60.  Kosovo got credit for improvements in several categories:  starting a business, tax compliance, and trading across borders.

I expect that today you will hear from many people about Kosovo’s potential.  As a developing country, Kosovo offers a range of ground-floor investment opportunities in the mining, energy, and agricultural sectors, among others.  Infrastructure, adventure tourism, furniture production, apparel, healthcare, telecommunications, and franchising are also investment possibilities.  In fact, Kosovo opened with great success its first U.S. food franchise – and the world’s second largest restaurant chain, a Kentucky Fried Chicken fast food restaurant – in August, and we see much potential for growth in this area.

With the new terminal at Pristina International Airport and through partnerships such as the one Kosovo enjoys with the U.S.-Turkish consortium Bechtel-Enka, the country is improving its infrastructure to increase interconnectivity in the region and to provide new routes to facilitate trade, commerce, travel, and tourism.  Kosovo is just a few hours’ drive from the $17 trillion EU economy, with tremendous opportunities to manufacture goods in Kosovo and to export them to the European market.

The government is also working with another U.S. company to build a new thermal power plant, Kosovo C, which will provide Kosovo with a secure and stable energy supply further bolstering economic growth.  When completed it will also eliminate the most frequent complaint I hear from businesses and potential investors, that is the unreliability of electric power.

Kosovo is a physically stunning place with numerous tourism opportunities.  Hiking, horseback riding, fishing, and skiing are all possible areas in which to invest, and to truly flourish, the adventure tourism sector would best be served with investment in some of the larger scale opportunities on the horizon.

It is important to note that one of Kosovo’s key assets is its young population – the youngest in Europe, in fact, with some 50% of the population under 25.  These young people are Western-oriented, with many speaking English and having lived, worked, or studied abroad. They are accustomed to European lifestyles and products as well.

With a developing legal framework, competitive wages, strong U.S. and European brand loyalty, and the desire to attract Foreign Direct Investment, now is a good time for the private sector, especially foreign investors, to take advantage of the many opportunities that Kosovo has to offer.

Kosovo’s business and investment climate does, however, face some challenges.  And my Embassy is prepared and willing to help U.S. companies navigate these challenges.  Despite progress in recent years, limited technical and bureaucratic capacity at the local and central government levels remain a challenge to Kosovo’s economic development.

There are also significant political challenges, and, at times, undemocratic means of expression exercised by some Kosovo citizens, including some in Parliament.  These issues were widely covered by the international media last fall and winter and have fueled a negative image of Kosovo that is not really fair.  While the pictures of tear gas in the Assembly and protests outside were dramatic, the fact is that life — and business — continued as usual in the rest of Pristina and Kosovo.

As in other developing countries, corruption remains a significant challenge, and something that I and my government have made a top focus of our diplomatic efforts and our assistance programs.  The government is aware of the need for more progress and has taken significant steps.

For Kosovo to reach its full potential, the United States is not just urging Kosovo’s leaders to take strong steps against corruption – though we are certainly urging that.  We are also investing a great deal of money and effort to help Kosovo improve the capabilities to fight it.  Altogether, over the next year, my government will spend over $12 million in development aid and expertise focused on rule of law.

But one of the most important Rule of Law steps Kosovo has taken recently had nothing to do with the U.S.  Just last week the Kosovo Government began implementing an agreement with the UK embassy whereby recruiting of the top two dozen senior civil service jobs will be handled by a UK head hunting firm.  This process will ensure that these jobs are filled by people who demonstrate professional qualifications rather than political connections.  It is a truly courageous move for a new country where party and family ties are important, and should be a game changer in providing the kind of steady, predictable governing climate that helps businesses thrive.

Kosovo has moved forward and made tremendous progress over the last eight years since independence; there have been many changes.  But one thing has not changed; my country’s support for Kosovo’s success.  The United States is committed to helping support Kosovo in its efforts to create an investment climate that will attract credible, committed investors.  We want to see more investments, more jobs, and economic growth in Kosovo.  You can play an important role in these efforts.  So I encourage you to take advantage of this opportunity to speak to Government representatives about issues that are relevant to your business interests.  Share with them your ideas.  Ask them your questions.  And I hope we see you and your businesses in Kosovo in the near future.