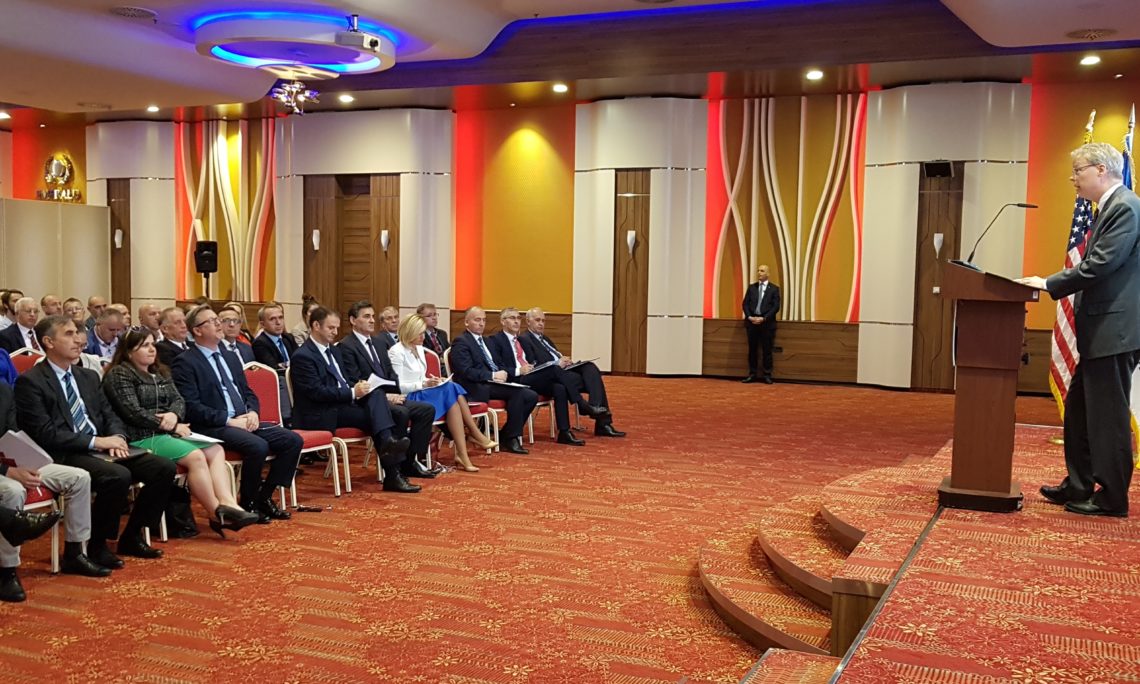 Mirëmëngjes.  Dobro jutro.  Hello everyone.  Thank you very much to Deputy Prime Minister Kuqi, Minister, Mayors, it is wonderful to have you here today to help launch this important project.

It’s really great for me to be here to help launch this important initiative.  And I’m confident that our partnership on the TEAM project will be a true game-changer for Kosovo.  Not only in strengthening how public procurement functions, but also in bolstering the public’s trust in local government and modernizing the way that Kosovo does business.

TEAM will work in five focus municipalities for day-to-day mentoring, training and coaching to improve how they account for public funds and expenditures. But TEAM will also be active in every municipality in Kosovo, training procurement officers on end-to-end procurement and providing coaching on how to collaborate with municipal and central government partners.

TEAM also has an important e-procurement element, and the project will support the ongoing roll-out of an electronic procurement system combined with support for internal controls, data collection, and monitoring. E-procurement will introduce Electronic Tendering, Auctioning, and Contract Management as well as procedures to handle complaints. Importantly, the Government of Kosovo estimates that the system will yield 5%-20% savings for the Kosovo budget- this translates to roughly 50-200 million Euro in savings per year for Kosovo.

Now, you might have heard me talk once or twice – or a few hundred times – since I arrived here in 2015 about the importance I place on the fight against corruption, and of the need for all public officials in Kosovo to faithfully serve their citizens, who are counting on them every single day.

Fighting corruption is never easy, and we don’t always have good news to share.  But everyone joining us today is here because you’re signing up to do something about it.

So, I salute the mayors of the five municipalities who have agreed to partner with this initiative, who have shown the political will to make a positive change.  I know it’s hard to change the way business is conducted, especially something as complex as municipal procurement.

But we also know that the time is right for us to work together to make public procurement more transparent, more cost-effective, and – most importantly – more focused on meeting citizen needs and priorities.

I also acknowledge the efforts of central government initiative to develop and implement e-procurement.  Success in municipalities is dependent on your ability to continue rolling out e-procurement at the national level.

One of the most important pieces in the fight against corruption is creating conditions that make it harder to happen, or reducing the space for corruption.  I think the TEAM project will have a real, tangible effect in this regard, in diminishing the opportunities for rent seeking behavior and ensuring that all public officials understand that transparency in procurement has to become the norm for Kosovo.

I’ve said before that corruption undermines public trust, it undermines faith in government.  And this faith is so critical to everything Kosovo wants to accomplish – strengthening the rule of law, growing the economy, attracting foreign investment, and continuing on the path of European integration.

All of this depends on bringing your people with you.  All of it depends on public trust because government is a social compact.  And this has to be held sacred, and renewed, every day. Standards are high. One bad decision by one city employee based on patronage or nepotism will undermine public confidence in every other decision the city makes.

And that goes for citizens and communities as well as government.  It works both ways. Everyone has to commit to a climate of transparency, of accountability.  Everyone has to fulfill his or her role in the compact for a democratic society to flourish.

One of my former bosses once said that “Fighting corruption is not just good governance.  It’s self-defense.”

I love that notion.  I love the idea that working to build transparency and accountability are not just acts of merit, but of national self-preservation, and even devotion.

Of course, this is about more than fighting corruption.  This is also about efficiency and modernization.  The way that governments budget and allocate funds, the way that procurements are advertised and decided…these are not remote bureaucratic institutions.

These are decisions that affect every facet of our lives – from school textbooks, to paving roads, to healthcare.  Transparency in public procurement ensures that projects great and small are undertaken with integrity, implemented with excellence, and executed for the benefit of the community.

It means no more backroom deals, no more rigged tenders, and no more benefiting the few over the many.

I’m also pleased TEAM includes training and mentoring for public procurement officials, because new technologies alone are not the answer.  Training and coaching are needed to get the most out of this new system, and to ensure that every procurement official feels empowered with an equal stake in changing the way we all do business.

And because government doesn’t exist in a vacuum, the role of civil society as full partners in monitoring public procurement will be critical as well.  As will TEAM’s establishment of a Contractors Performance Reporting System with real reporting standards to ensure that poorly performing companies that use public funds are held to account as well.

Every piece of this is crucial, because trust must exist at every level to restore the public’s good faith.

I thank you all for taking your own leap of faith on this new initiative, for being change agents, and I’m so proud to partner with you as we continue to work every day on behalf of Kosovo’s communities.

Faleminderit shumë, hvala mnogo, and thank you all very much!