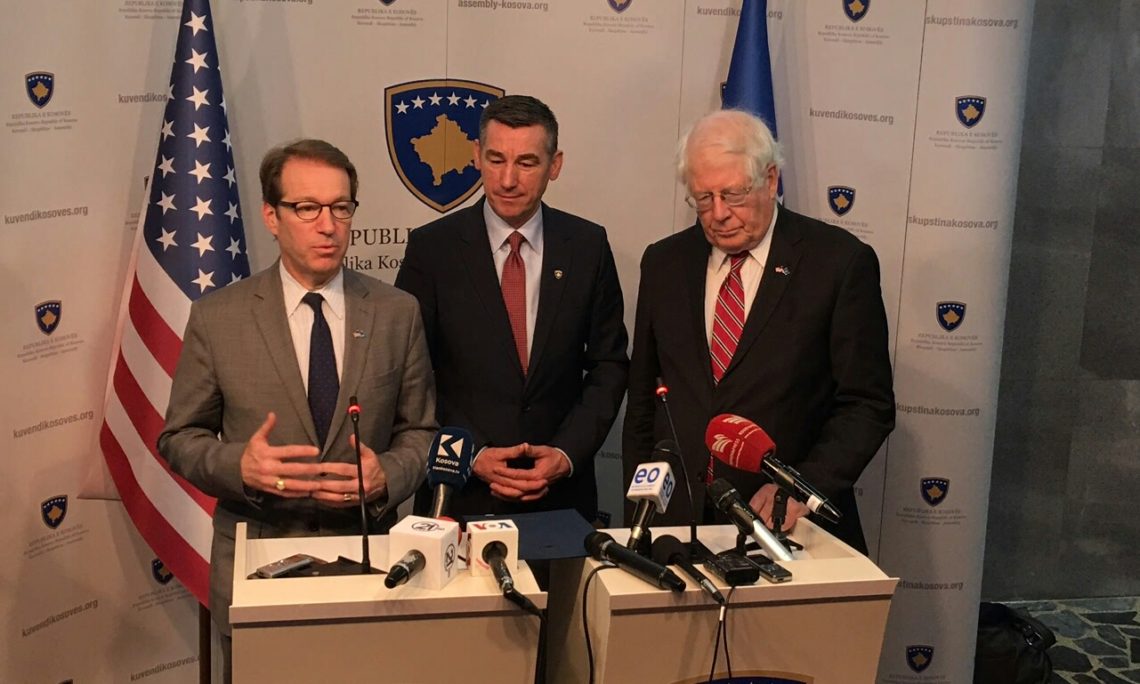 Congressman Roskam: Thank you Mr. Speaker (Veseli). You’ve been very gracious in your hospitality this morning, you and your colleagues.

My name is Peter Roskam. I am a member of Congress and I am joined with my colleague Congressman David Price. We’re a bipartisan commission of the United States House of Representatives and we’re part of the House Democracy Partnership. We have a relationship with the Kosovo Assembly, members of parliament in relationship and friendship with the Kosovo assembly because we believe a strong assembly means a strong Kosovo. And a strong Kosovo is a strong democracy which is good for the region and good for the world. This is the first congressional delegation opportunity, that is the first opportunity for members of Congress to travel outside of the United States since we were sworn in last month.

Kosovo is our first stop. Why is that the case? Because this country is so important. The whole world is watching Kosovo. The whole world is rooting for Kosovo in some ways. We certainly are. We realize that a stable Kosovo and one in which all parties are included in governance is one that we can greatly celebrate. As I told the speaker and his colleagues, the experience of Kosovo for any student of history is incredibly humbling. That is to realize that many of the people we are interacting with have had their own very difficult journeys from a historical point of view. Yet here we are today in a democracy in a country that is to be celebrated and to be encouraged. We know there are great challenges for Kosovo but we also know that the trajectory of Kosovo is very significant. This journey and the role that the Assembly plays especially in terms of long-term prosperity why we are here today. So it is a great honor, and Mr. Speaker, with your permission, I’d like to yield to my friend, Congressman David Price.

Congressman Price: Thank you. It is great to be back in Kosovo and to be so warmly welcomed on this snowy Sunday morning. We are grateful for the hospitality. We have always felt a special tie to this country. And we know that feeling is mutual because of our shared history. Because of how much our country has invest in your future and how much you have fought for your own future and have sought out our friendship and support. So it is a special relationship. We have had a tumultuous political season in our own country, but as Peter Roskam says this is our first venture out after the transition that has occurred. And part of our intent is to signal that no matter what the changes may be in our country’s leadership, we have a bipartisan policy toward the Balkans and in Kosovo in particular. And we are determined that that will continue, that friendship and support will continue.

Now our House Democracy Partnership is a bipartisan commission of the U.S. House of Representatives, which is a very targeted part of that diplomatic effort. But we’ve been with Kosovo from the very beginning, I must say. We were here working in Macedonia years ago and traveled to Kosovo before independence. And we concluded a partnership immediately upon independence. We’ve been back and forth many times. Many of your members of Parliament, your staff members have come to the U.S. We have over the years built up not just good will, but I think some very valuable shared experience that will enable the Parliament of Kosovo, the Assembly, to be an independent institution of government that has its own expertise, has its own authority, and together with the executive branch and the Ministries, governs in a responsive and accountable way. That is what democracy is all about. We sometimes say that free and fair elections are very, very critical for democracy, but even more important is what happens between elections, which is the formation of responsive organs of government. And so we are proud to be your partners in this and we look forward to this continued relationship. Thank you.