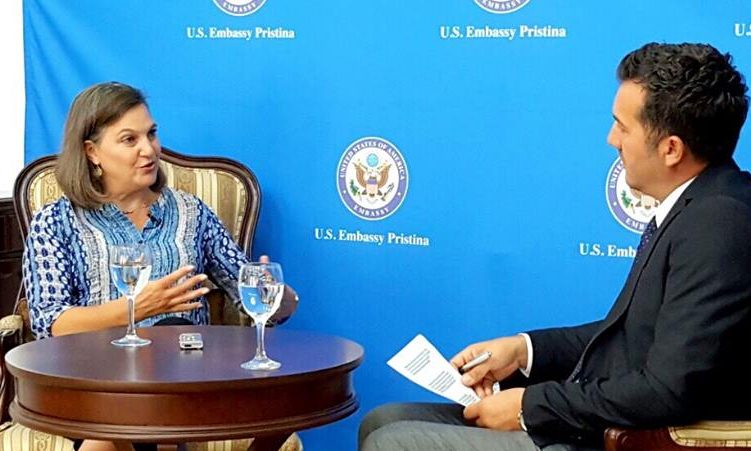 Assistant Secretary of State Victoria Nuland visited Kosovo on Sunday, July 10, for a series of meetings with leaders from the Government of Kosovo and civil society. She was joined during her visit by Deputy Assistant Secretary of Defense for Russia, Ukraine and Eurasia Dr. Michael Carpenter and United States Ambassador to Kosovo Greg Delawie.

During meetings with Kosovo President Hashim Thaçi, Assembly Speaker Kadri Veseli and Prime Minister Isa Mustafa, Deputy Prime Minister Hajredin Kuçi and Foreign Minister Enver Hoxhaj, as well as with Deputy Prime Minister Branimir Stojanovic, Assistant Secretary Nuland underscored the United States’ continued support for strong, independent and democratic Kosovo. Assistant Secretary Nuland emphasized that Kosovo has made considerable progress over the past year, but that the government must continue to address important challenges that remain especially in the areas of rule of law and corruption, economic development, and Euro-Atlantic integration, including demarcation with Montenegro and the dialogue with Serbia.

Before departing, Assistant Secretary Nuland gave an interview to RTK television, during which she answered questions about United States priorities in Kosovo, the need for progress in the Parliament, dialogue with Serbia, Kosovo’s efforts to combat violent extremism, border demarcation, and the Association of Serb-Majority Municipalities.