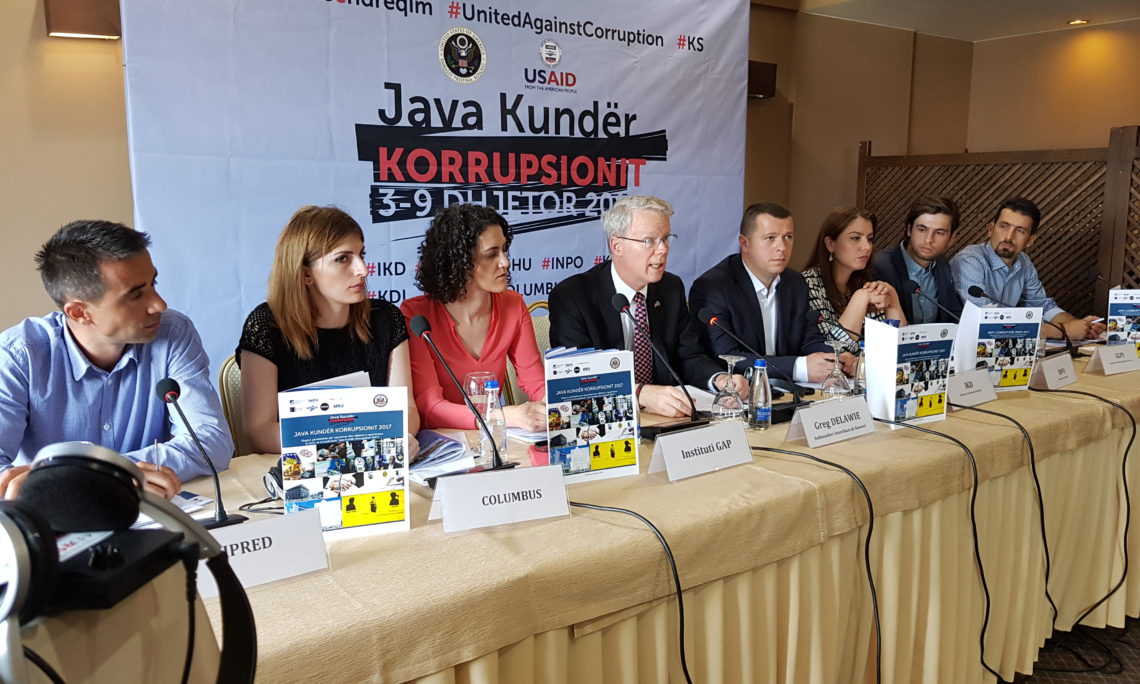 I want to thank the coalition that was behind Anti-Corruption Week 2017, namely the Kosovo Law Institute, Group for Legal and Political Studies, GAP Institute, Initiative for Progress, Columbus Institute, Cohu, and Kosova Institute for Policy Research and Development.

Last December, you worked closely with the U.S. Embassy and other embassies and their ambassadors to highlight and debate the most pressing corruption cases in Kosovo.  Corruption is deeply-rooted.  You and I know that it cannot be eliminated overnight, let alone in six months or even in a year.  The important thing is that civil society recognizes the problem and citizens, whether as individuals or through organizations like yours, take up the fight and do what you know is right and what is best for the future of this country.  I really appreciate the fact that you’re doing this six-month review, because this kind of follow-up is the best way to make a difference. Progress is impossible without persistence.

In the video that I recorded at the beginning of last year’s Anti-Corruption Week, I highlighted the importance of passing an updated Law on the Disciplinary Counsel, a critical step toward strengthening checks and balances in Kosovo’s judiciary system and ensuring judicial sector personnel will be held to the highest standards of discipline and accountability.  I am pleased that progress has been made and that we are very close to seeing this become a law.

I am also pleased that the GAP Institute was successful in reversing a decision on public debt forgiveness which it raised during Anti-Corruption Week.  That kind of pressure and public awareness made a difference in getting the Government to revoke its earlier decision which forgave the debts and obligations that bottled water producers owed to Kosovo’s budget since 2008.

Not everything debated and highlighted last December has been resolved.  The work continues.  Many challenges remain ahead.  For example, corruption in public procurement has far-reaching consequences.  It deters investment, undermines local services and systematically erodes public trust.  In this area, your work is vital.  All elements of civil society need to be vigilant in monitoring public procurement and supporting solutions.

That is why you are here today.  Just as my embassy supported you in the past, we will continue to support you in the future.  Fighting corruption has been my highest priority since I arrived in Kosovo three years ago.  We will continue to lend our resources, our expertise and our moral support to like-minded friends who see the fight against corruption in Kosovo as critical to the future success of this country.

You have my unwavering support.

I would be happy to answer a couple of questions.