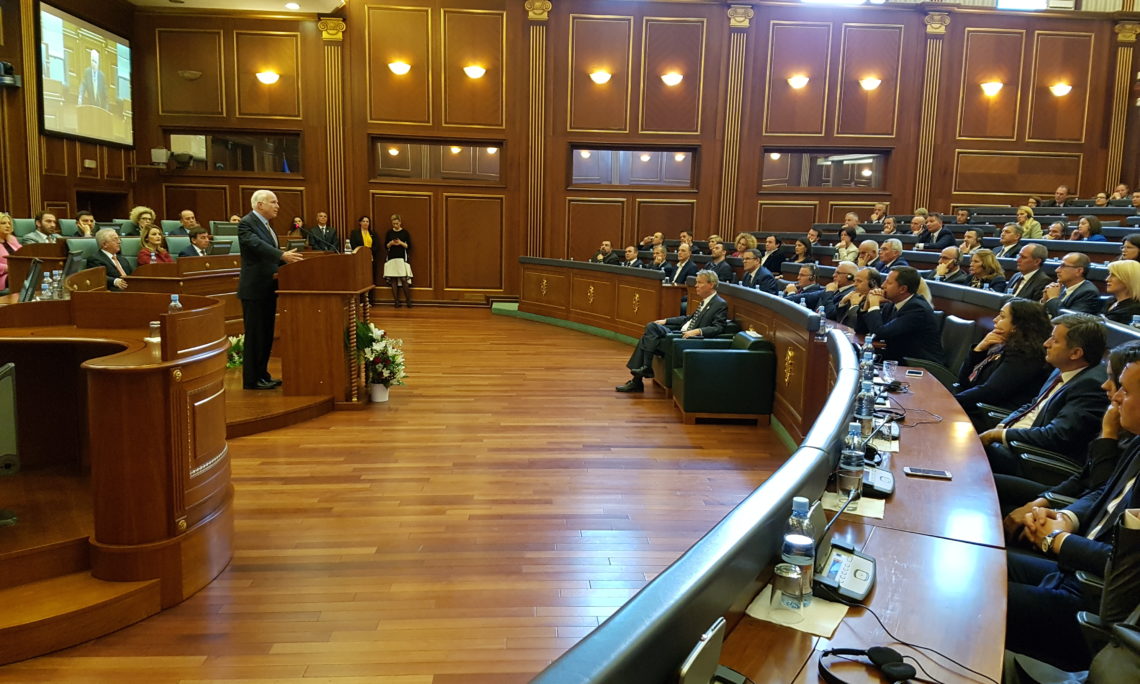 Thank you, Mister Speaker, Mister Prime Minister, and dear friends for that kind reception and for the honor of addressing this Assembly.

I come here to Kosovo after visiting Slovenia, Croatia, Serbia, Bosnia and Herzegovina, and Montenegro. After my stay here—which I must admit is far too short—I will also visit Albania. As I travel through Southeastern Europe, my message is simple: the United States’ commitment to the vision of a Europe whole, free, and at peace remains ironclad. And my friends, a strong, democratic, multi-ethnic, and independent Kosovo that is a full member of the European family is essential to the success of that vision.

You may have heard that we occasionally have some disagreements back in Washington. But I want you to know that Members of the United States Congress in both political parties are fully committed to working with you to support peace and prosperity in Kosovo and throughout the wider region.

Indeed the United States’ commitment to Kosovo has been bipartisan from the very beginning. I have many fond memories of the 1990s working closely with then-Democratic Senator Joe Biden to push for a coherent U.S. strategy in the Balkans, for swift and decisive action to stop the bloodshed in Kosovo, and, ultimately, for Kosovo’s independence.

And today, it gives me great pride to stand before you on my first visit to Kosovo since your independence and to bear witness to the remarkable progress you have made.

In the past nine years, Kosovo has adopted a constitution and built a government from the ground up. Kosovo has been recognized by over 100 member states of the United Nations. It has joined international organizations such as the IMF and the World Bank. Kosovo has made progress towards some of its most important goals, including integration into the European Union, integration of Kosovo Serbs into Kosovo’s institutions, and normalization of relations with Serbia through the EU-facilitated, U.S.-supported dialogue process.

I particularly want to commend Kosovo’s efforts in the fight against terrorism. I believe your country has not received the credit it deserves for the proactive approach it has taken to countering violent extremism. Legislation passed by this Assembly has helped stem the flow of foreign fighters to conflict zones. Since 2014, Kosovo Police have arrested approximately 120 individuals suspected of supporting terrorism. More than 30 are on trial, and several cases have been successfully prosecuted. Just last year, Kosovo authorities helped disrupt a terrorist plot against a soccer match between Albania and Israel. Kosovo is “all in” in the fight against terrorism, and showing the kind of contributions it can make as a full member of the family of nations.

For all the progress Kosovo has made, there is still much work to be done. But in this work, you will not be alone. The United States stands ready to support you to meet the challenges and seize the opportunities ahead. If you will permit me, as an old friend who wants to see Kosovo succeed, I’d like to share with you my hopes for Kosovo’s bright future.

I hope that Kosovo will continue down the path of European integration. The signing of a Stabilization and Association Agreement with the European Union in 2015 was the first step. Now is the time continue to the march of progress. I share President Thaci’s view that approval of the border demarcation agreement with Montenegro, and the EU visa liberalization that would bring, would represent a strong step forward for Kosovo’s European future.

I hope that Kosovo will achieve even higher economic growth that will extend opportunities to more of Kosovo’s promising youth, and allow them to lead lives of purpose and fulfillment in the country they call home. In a global economy, where investors have choices about where to place their money, corruption and organized crime will only hold Kosovo back. That is why reforms aimed at strengthening the rule of law are so essential to realizing Kosovo’s economic potential. Likewise, energy security is a necessary ingredient for economic growth, which is why the United States will continue to support the Kosovo C power plant.

I also hope Kosovo will continue to play a strong role in advancing regional security. As Kosovo confronts growing challenges, I believe KFOR will continue to play an important role in backstopping security and stability at the same time Kosovo works to strengthen its security architecture. Moreover, I am committed to doing everything I can as Chairman of the Senate Armed Services Committee to ensure the United States provides the support and security assistance Kosovo needs.

Ultimately, Kosovo’s long-term security is rooted foremost in its political and security relationships with the United States, NATO, and other international partners, which are underwritten by shared democratic values and adherence to the rule of law. That is why it is so important that the transformation of the Kosovo Security Forces to the Kosovo Armed Forces take place through constitutional amendment. This is a sovereign decision that the people of Kosovo must make for themselves. As President Thaci has stressed, this “should be a gradual, inclusive process with the engagement of all communities,” including Kosovo Serbs. Done this way, I believe transformation to the Kosovo Armed Forces over the long term will advance Kosovo’s progress, bolster its international legitimacy, and ensure its future access to military assistance.

Finally, I believe that Kosovo’s future peace and prosperity depend on the success of the EU-facilitated and U.S.-supported dialogue on normalization of relations with Serbia. This is difficult, but important work. I know this dialogue has not always moved at the pace we would like. But thanks to the commitment of your President, Prime Minister, and Speaker, as well as their counterparts in Belgrade, it has led to significant progress.

My message to you is the same as the one I delivered to Serbian Prime Minister Vucic earlier this week: advancing the EU-facilitated, U.S.-supported dialogue is in the interests of Kosovars and Serbs alike. It is vital to Kosovo and Serbia’s shared European future. And it is essential to stability in Southeastern Europe.

I know that there are some who believe that Kosovo and Serbia will never normalize their relations…that the path of reconciliation may be available to some nations, but not yours…not in Kosovo, not in Serbia, not in the Balkans.

But I urge you to reject such fatalism. I know that for so many people in Kosovo and Serbia, the pain of losing loved ones to violence and war is not written in a dark chapter of the distant past, but carved into their hearts forever. I would never presume to fully comprehend their grief, or understand the complicated history of their stories. But I do know something about the horrors of war and the pain of loss. I know that reconciliation is enormously difficult. But even more importantly, I know how it can liberate people and nations to achieve things they never dreamed possible.

Twenty years after the end of a long and bitter war that claimed the lives of 58,000 Americans and more than 3 million Vietnamese on both sides of the conflict, the United States and Vietnam normalized relations. If you had told me the day I left Vietnam in 1973—or for that matter, many years afterwards—that  today Vietnam would be one of the United States’ most important and most promising emerging partners…well, it just goes to show: reconciliation is possible, even after one of the most bloody conflicts.

But it isn’t easy. Reconciliation is a deeply personal process. It was a long and difficult road for me and so many others. But ultimately, we realized that while we should never forget our past, nothing was to be gained by reliving it…that the only hope for realizing a more promising future for both our countries was to build it together.

There are countless reasons why the story of the United States and Vietnam is different from the story of Kosovo and Serbia. But what I believe these stories share in common, and what gives me hope for the people of Kosovo, is the tremendous human capacity to overcome…to heal…to reconcile.

But let Kosovo be the nation that shows the world once again that reconciliation is possible. And as you do, as Kosovo walks this long and difficult road, you will not walk alone. America, and I, will be with you.

Yes, we will be with you and the nations of Southeastern Europe for the simple reason that my country ignores this region at its own peril. Before coming here to Kosovo, I traveled to Sarajevo. I stood at the foot of the Latin Bridge, where a single event changed the world, where an assassin’s bullet triggered a cycle of violence and war that consumed the first half of the 20th century, and consumed Southeastern Europe again in its final decade.

It was a stark reminder of the old adage that while history does not repeat itself, it does rhyme. There is no denying the fact that this region, which sits at the crossroads of history, confronts increasing tensions. Together, we must answer the question: will we allow the past define our future? Or will we choose, informed as we are by the lessons of history, to define a new and better future for ourselves and our children? I have come to Kosovo to say that I believe we must, and we will, choose that new and better future. Thank you.