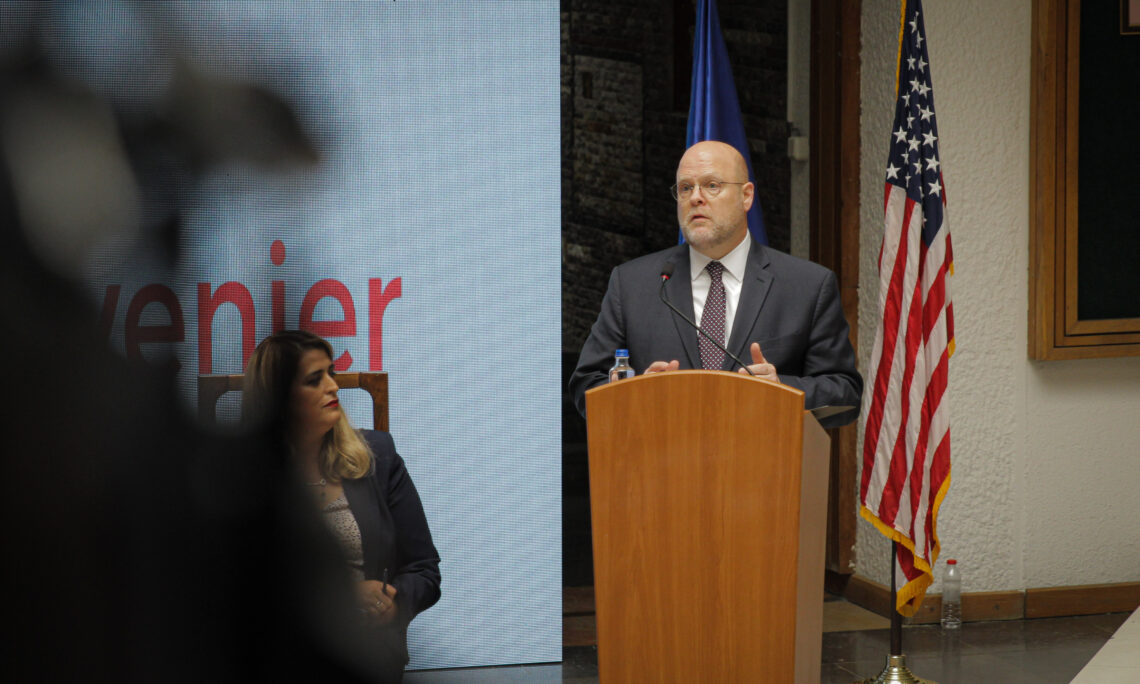 Ambassador Hovenier’s Remarks at the “Lëvizja Fol” Domestic Violence and Rule of Law Event, May 18, 2022

Mahatma Ghandi reportedly once said ‘the true measure of any society can be found in how it treats its most vulnerable members.” I would argue this is the true test of the resilience and strength of the rule of law in any democracy.  There is no greater responsibility for governments or rule of institutions than to protect and uphold the rights of its most vulnerable citizens.

As you all know, domestic violence is not native or unique to Kosovo. According to a recent study using W.H.O. data, over a quarter of women worldwide have experienced domestic violence in their lifetimes.  In the United States alone, it’s estimated nearly 20 people per minute are victims of physical violence by an intimate partner.

I was struck by this passage from today’s Levizja FOL report about the situation in Kosovo: “Domestic violence continues to be one of the most unreported crimes in our society. Based on various reports and research by civil society organizations in Kosovo, many women still consider domestic violence in Kosovo to be a private matter, so it often goes unnoticed and is not reported at all.”

For years, domestic violence was also viewed as a private matter in the United States. When President Biden first drafted the Violence Against Women Act 28 years ago, he knew that preventing and combatting domestic violence required nothing less than a culture change.  As he said, “as a society, we literally looked away. In many places domestic violence wasn’t a crime… and I don’t recall how many times I was told …that it’s a family affair. And the only way we could change the culture was by shining an ugly, bright light on it and saying its name.”

I grew up as a member of a close religious community in the Pacific Northwest. I remember an occasion when it was fairly clear that one family in our congregation was experiencing domestic violence.  When my father and mother became aware, they did not hesitate to act, sharing concerns with law enforcement authorities, and inviting the spouse and children to stay at our home for a while.

I remember something my Dad said in response – quoting the Reverend Martin Luther King’s “Letter from Birmingham Jail:” “Injustice anywhere is a threat to justice everywhere.”

My parents tried to teach my siblings and me that we all have responsibility to take a stand, to take action, when we witness injustice. I’m grateful for their example, and I try to live up to their legacy.

I want to recognize and commend the leadership of Minister Haxhiu and Deputy Minister Shala and the civil society partners in this room, especially Nora, Megi, and the Levizja FOL team, for your efforts to shine an ugly, bright light on domestic and gender-based violence here in Kosovo. Your work has been particularly crucial during the backdrop of the pandemic, where domestic violence cases have risen sharply in Kosovo, the region, and worldwide.

Awareness is only first step in changing the culture. This requires a comprehensive, system-wide approach. With this in mind, I want to commend the Government of Kosovo for developing and adopting a national strategy to combat domestic violence and for its recent decision to join the Istanbul Convention, working to fully implement its obligations.

It requires culture change and a whole-of-society approach: from the police who are first on the scene and conduct the investigation, to the prosecutors who try the case, the judges who hear the case and apply the law, the victim advocates who represent the victims every step of the way and those who provide support services, such as shelters; and the media who report cases to the public.

Better prevention is also sorely needed. The Istanbul Convention requires states to take actions to break the cycle of violence ensuring perpetrators are held accountable and are rehabilitated before their reintegration into society.

Like many others, I was shocked by the recent case of 18-year-old Marigona Osmani. While the outcome of the case is still pending, it seems likely that repeat offenders, known to law enforcement authorities, are responsible for her violent abuse, rape, and attempted murder.  Citizens deserve better: institutions must ensure they do not fail other vulnerable citizens.

Some violence may not be preventable. However, in those cases, government institutions and civil society partners can play a positive role in addressing victims’ needs.

While we know these efforts must be Kosovo owned and led, the United States will continue to support you. That is one of the reasons why our Embassy has been working to support the Victim Compensation Committee, now recognized as a leader in the region.

We will also continue work with police, prosecutors, and judges to not only increase efficiency but ensure compassionate care for victims. This support ranges from helping you establish more welcoming, inviting interview rooms for vulnerable victims of crime, to specific trainings on how to respond to and investigate these crimes.

This support is part of a longstanding U.S. strategic goal: that as Kosovo matures into an even stronger democratic partner, your rule of law institutions deliver for your citizens.

As I said earlier, the true test of any mature democracy is how it treats its vulnerable – ensuring all citizens, regardless of gender, background, religion, ethnicity, sexual orientation, or any other defining characteristic, have equal access to justice and are treated the same by justice institutions.

I think it is important to acknowledge just what Kosovo has achieved since the dark days of the 1990s. We must acknowledge the legacy of the Milosevic years, when an entire generation of Kosovans were denied access to justice; when good citizens were denied the ability to participate in institutions that should have been protecting their rights.

This changed in 1999 and later with Kosovo’s independence. Since 2008, we have witnessed the establishment of vital institutions.  It is important sometimes to step back and realize this remarkable progress.  In a relatively short time, police, courts, prosecutors, corrections — these are now Kosovo institutions led by Kosovans.

This has happened with international assistance, certainly, but these accomplishments are yours and yours alone.

At the same time, we must also acknowledge citizens expect, demand, and deserve more. They expect institutions to perform more efficiently and deliver results.  They expect officials exercise more integrity.  And they demand that officials are held accountable when they fail at either of these things.

Citizens deserve equal justice regardless of who they are. This is true in Kosovo just as it is true in the United States.  Citizens not only want, but they demand fair, transparent processes that they can trust and rely on.  They want a responsible system that serves them, not the political elite or external forces.

I want to reassure you that the United States remains committed to supporting and assisting Kosovo as you continue on this difficult, but essential journey – further strengthening your laws and institutions to ensure no citizen is left behind and the most vulnerable are protected.

Here’s my promise to you:

The United States will continue to support Kosovo-led initiatives to ensure all communities have responsive governance through our development assistance and training.

We will continue partnerships with Kosovo institutions as you work to ensure every citizen receives fair, efficient, and unbiased services and better understands their legal rights and court procedures.

We will continue to engage with civil society organizations and support them so they can fulfill their role in holding government accountable and helping citizen be heard.

We will continue engagements with justice institutions to help them apply existing integrity and performance accountability mechanisms, and to refine those processes.

Finally, we will continue helping institutions to find innovative new approaches to increase justice sector efficiency. For examples, we have focused on commercial justice to reduce opportunities for corruption in the business sector and build the private sector’s confidence in Kosovo’s rule-of-law system.

As you know, one of the United States’ overarching strategic priorities is to see a Europe that is whole, free, and at peace. Frankly, Europe is not complete without a Kosovo that succeeds and takes its rightful place in that community.  That is why we coordinate and collaborate so closely with the European Union, our European allies, and the OSCE and other international organizations to provide the support Kosovo needs to move closer to its European future.  It is also why our programs have and will continue to stress the adoption of European standards for law enforcement, corrections, and in every aspect of the justice sector.  The goal is that when Europe knocks on Kosovo’s door, you are ready.

Just like our European partners, we have high standards for Kosovo to live up to. And, when we see that Kosovo can perform better, we’ll certainly speak up – first in private with the responsible officials, but also publicly when needed.

Along with our European partners, we remain concerned when Kosovo institutions disregard valid court decisions. The rule of law must not be subject to political whims.  It is long past time for Kosovo to demonstrate its respect for its own independent judicial institutions by ensuring these decisions are fully implemented.

Ultimately, though, I am optimistic for your future. I know it can sound cliché, but how can you not be optimistic for Kosovo when you see the young people here today?

I am excited that so many of you are engaged in civil society or preparing for a future in one of the legal professions.

I want to highlight, in particular, one group who is with us. For the past five years, our Office of International Narcotics and Law Enforcement Affairs, or INL, has sponsored the participation of a team from the University of Pristina law faculty to participate in one of the leading U.S. law student competitions — the Jessup Moot Court.  Every year Kosovo’s representation has improved.  We’ve seen a determination in the returning students to work harder, to learn more, and to do even better the following year.  That’s why it’s so gratifying to be able to report that in this year’s competition three of the team members were named among the top 200 presenters out of over 3,000 participants.   Dean Puka, you and your colleagues should be very proud of these students, as should all of Kosovo.

This is just one example among many why the United States remains encouraged by Kosovo’s democratic trajectory.

While work remains, I promise you, if you continue on this challenging, but worthwhile path, your rightful place in European and Euro-Atlantic institutions is assured. That is where Kosovo is headed.  That is our vision and our desire for Kosovo and Kosovans.