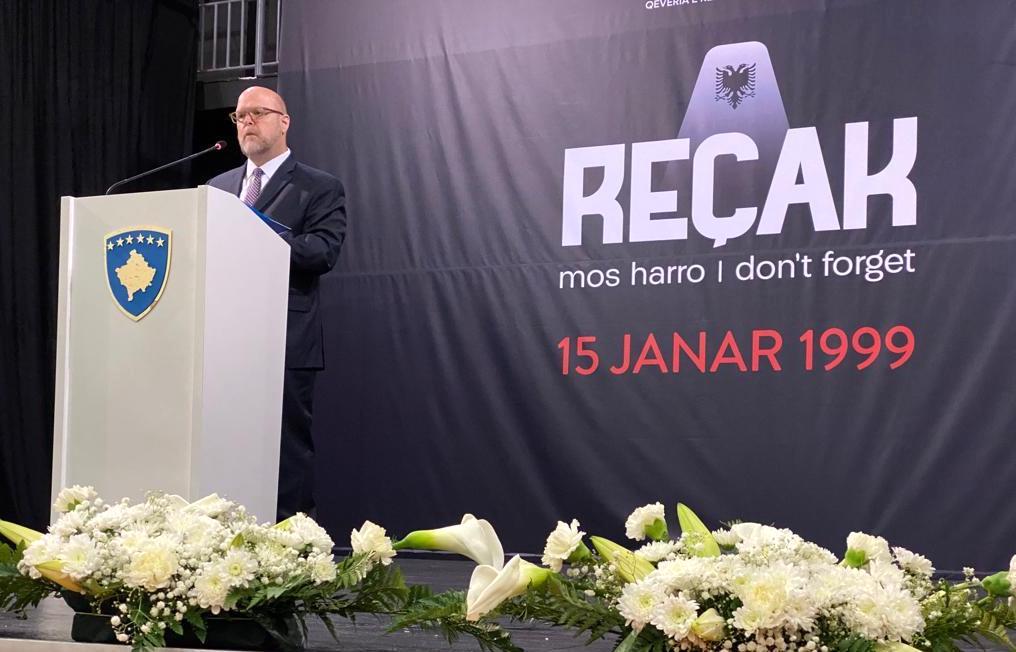 President Osmani, Prime Minister Kurti, Speaker Konjufca and distinguished guests, dear friends, I am humbled to be here with you today, representing the American people, to honor and remember those who lost their lives in Recak 23 years ago. Thank you for this opportunity to join the people of Kosovo on this solemn occasion to commemorate and mourn those whose lives were tragically cut short that day.

Let no one forget or deny what happened here, or why the United States and our allies came to the defense of the people of Kosovo. I remember that day well. As the officer at the U.S. Mission to the OSCE responsible for Kosovo at that time, I received a call from then-Kosovo Verification Mission Head Ambassador William Walker just after he departed the scene of horror, already focused on his recommendations for the OSCE in response to the brutal murder of defenseless civilians.

In response to this atrocity and others, the United States, together with our NATO Allies, acted to protect defenseless civilians in the name of peace, freedom, and stability. These goals reflect deeply held American and Western values. We believe that all people, regardless of ethnicity or religion, deserve the dignity of living in freedom and security.

We are aware of attempts to rewrite the well-documented history of this massacre and to downplay or misrepresent the facts about these atrocities. Let me be clear about the United States’ commitment to the truth. As President Clinton said then, we reaffirm now: “This was a deliberate and indiscriminate act of murder designed to sow fear among the people of Kosovo.”

Denying these incidents and glorifying war crimes dishonors the memory of the dead, reopens the wounds of survivors, and sets this region back in efforts towards democratic consolidation and full Euro-Atlantic integration. Peace and justice come from a clear-eyed acknowledgement of past crimes. This is vital to ensure these heinous crimes never happen again.

But recognizing the truth of the past is just the first step towards justice.

Today, January 15, is the 23rd anniversary of the massacre here at Recak. It is also, coincidentally, the birthday of one of the United States of America’s greatest leaders and advocates for justice and reconciliation – Dr. Martin Luther King.

I think it is fitting that on this day as we reflect on the horror and tragedy of what happened here on January 15, 1999, we also consider the words and legacy of Dr. King – whom we pay tribute to and honor on this same day each year.

Dr. King was no stranger to injustice, no stranger to loss. Throughout his struggle to advance human rights, he was physically attacked, marginalized, threatened, and ultimately assassinated. Yet even as he languished in an Alabama jail for peacefully protesting racism and racial segregation, he wrote of justice and reconciliation – the ultimate goal not only equality, but shared destiny. In his famous “Letter from Birmingham Jail,” he penned these transcendent words: “injustice anywhere is a threat to justice everywhere.”

Dr. King called us all to action, affirming that we have the power to promote positive change, noting “Human progress never rolls in on wheels of inevitability.” But he also called on us to remember the main point – not retribution, but reconciliation. I echo his words – a powerful reminder for all of us: “Our ultimate end must be the creation of the beloved community.”

In the spirit of that vision of a beloved community, I want to cite one more powerful text that I believe can provide a guide for how best to honor the tragic victims we remember here today. From Kosovo’s February 17, 2008 Declaration of Independence…

“Committed to confronting the painful legacy of the recent past in a spirit of reconciliation and forgiveness. Dedicated to protecting, promoting and honoring the diversity of our people.”

May these words guide us all.