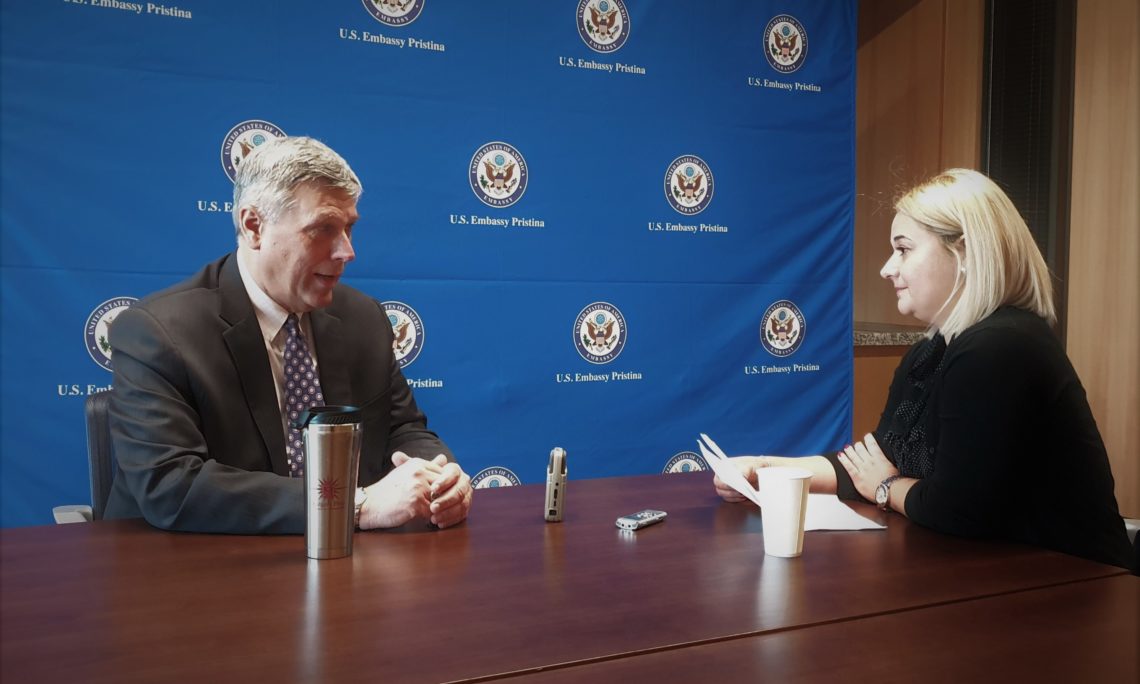 Radio Kosova 2:  At the beginning I wanted to thank you for this interview. Mr. Ambassador at the very beginning, how do you comment so far on this negotiation between Vetevendosje and LDK?

Ambassador Kosnett:  Thank you Sandra. I believe that both Vetevendosje and LDK are committed to building a coalition that will effectively represent all the people of Kosovo.  I think on October 6 the people voted for change and these parties are committed to that.  It’s important to note that this new coalition government must include representation from beyond those two parties.  I met couple of days ago with representatives of the non-Serb minority parties and I believe they are also committed to stepping beyond traditional politics to really try to build a good future for this country.

Radio Kosova 2: They said—the working groups said—that they have agreed one hundred percent on the program but it seems like it’s not going to be easy for them to come to a final agreement.

Ambassador Kosnett:  I think there have been a lot of public statements and public speculation about the nature of these discussions.  I, myself, am stepping back from that—I don’t think it adds anything for me to comment on this.  Frankly, my government is confident that this is going to work out and we are more interested in talking about the way ahead—the future of the country—than in these political details.

Radio Kosova 2:   It may be hypothetical, but if these two parties don’t have this agreement, could Kosovo go to another elections, can Kosovo afford new elections?

Ambassador Kosnett: I think that’s very unlikely, but as you say, it’s hypothetical so we’ll just leave it there. I think that, again, Vetevendosje and LDK and the other parties have an opportunity to create a government that is going to do great things for this country. Let me add also that even those parties that are not part of the government, the parties that end up in opposition, have an important role to play in thinking about the unity of the country looking for opportunities to cooperating constructively with the government.  Our view is that everybody in the country has a role to play. For that matter, we talk a lot about the role of the political parties, but people in the private sector, people in civil society organizations, ordinary citizens, the media—everybody has a right and a responsibility to make their voices heard.

Radio Kosova 2: How does U.S. see Albin Kurti as a future Prime Minister?

Ambassador Kosnett: I think Mr. Kurti knows that being Prime Minister is very different from being an opposition leader and his thinking is rapidly evolving.  I think he is going to reach out to others to try to build an inclusive government and to take constructive steps forward in all the areas that the United States thinks are important for Kosovo—what do I mean by that?  We talk a lot about our priorities for Kosovo in terms of supporting the people of Kosovo in building peace, justice, prosperity.   By peace we mean improved relations with the neighbors—with neighboring counties–but also better relations among the communities here in Kosovo.  When we talk about justice, we are talking about the fight against corruption which was a centerpiece of the election campaign this year, but also more broadly building a society with equality for everybody—equal opportunity, equal rights under the law regardless of their community, their gender, their orientation.  When we talk about prosperity, we think that the key to economic development is unleashing the energy and the creativity of the private sector. Foreign investment is important, and we think that improved relations between Kosovo and Serbia will lead to more foreign investment, but at the same time Kosovo should not neglect the energy and ability of its own people.

Radio Kosova 2:  According to the Constitution of Kosovo one ministry should go to the Serbian community in Kosovo and in this case that would be Srpska Lista because they won the most votes in the elections.  But do you see Srpska Lista in the future government because we heard that Albin Kurti said that he would rather see them in opposition?

Ambassador Kosnett:  I think Mr. Kurti understands very well the Constitution of the Republic of Kosovo and he understands the political reality of Srpska Lista and I don’t see a way for this country to move forward without listening to the voices of the Serb community, as well as everybody else, and Srpska Lista is a very important voice.

Ambassador Kosnett: Well again, I am not a party—I am not directly involved in these negotiations among the parties, but I have met with the representatives of the minority parties.  I think that they are for the most part quite optimistic about this new government and I think that there will be cooperation, both among the minority parties and between the minority parties in other elements of the government.  Of course, now there is a lot of intense negotiation and discussion—this is normal.  As you’ll remember, there have been times after elections in Kosovo when it has taken months to form a new government.  I think this process is going to go much more quickly this time.

Radio Kosova 2: I think two days ago you met with the leaders of the minority communities, is that right?

Radio Kosova 2:  What did you talk about with them?

Ambassador Kosnett: We talked about the future of the country and how everybody in Kosovo—everyone in political position in Kosovo—should be thinking not just about his or her political future as an individual, not just about the community he or she belongs to, but also the good of the country.  I talked about how it’s important for people to step back from this traditional politics of trading and alliances and really think about how to build a country of peace, justice and prosperity for future generations—I think that’s a message that people agree with.

Radio Kosova 2:  What do you expect from the future government, what should be the top priorities?

Ambassador Kosnett: I think that it was clear during this election campaign that people are focused on the fight against corruption and building a judicial system that everybody can trust.  People are concerned about the lack of jobs, about the lack of economic opportunities.  I think even though Vetevendosje and LDK traditionally have had rather distinct economic theories—ideologies—I think that they are going to find a way to do their part to unleash the energies of the private sector, which is important.  Finally, I do believe—my government firmly believes–that the government of Kosovo must be prepared to get back to the negotiating table with Serbia in the dialogue.  We also think that Kosovo should take advantage of the opportunity to sit down as an equal with other countries in the region to talk about the so-called mini-Schengen proposal because we don’t believe that it’s possible to speak of a prosperous economic future for the region without Kosovo playing  a role in shaping that future.  My final point is that we believe that these issues of peace, justice, prosperity all have to be tackled together.

Ambassador Kosnett: My government’s position is that Kosovo should suspend the tariff, Serbia should suspend its campaign of de-recognition, and everybody should get back to the table.  The goal here should be not to create new barriers to trade and investment and cooperation, but to find ways of breaking down those existing barriers. So, once the government of Kosovo and the government of Serbia sit down across the table, they should be thinking about ways to improve cooperation between the two countries.

Radio Kosova 2: What should the final agreement between Kosovo and Serbia look like?

Ambassador Kosnett:  In the first place, it has to be an agreement that is acceptable to the people of both countries, not just to some politicians.  But we believe that a comprehensive agreement will create opportunities for more trade, for more investment, reduce barriers to economic partnership.  It should also address law enforcement cooperation and the opportunity to reinvigorate investigations of missing person cases and other crimes from the past that may have been committed by the people of different communities.  Most of all, we think it’s important for Kosovo and Serbia to build a future where they don’t look at each other as enemies and rivals but as partners. We know that a lot of work needs to be done for Kosovo and Serbia to build that future, but the time to start is now.

Radio Kosova 2: The Presidents of Kosovo and Serbia have been talking about the demarcation or exchanging territories, would U.S. support such a solution?

Ambassador Kosnett: Thank you for the opportunity once again to explain the U.S. position on exchange of territories because I think it has not been well understood. Some officials of the U.S. administration have said that if Kosovo and Serbia design a comprehensive settlement that involves some adjustment of territory, we would not reject it out of hand.  We would look at it—we would consider it—but such an agreement would have to be acceptable to the people of both countries.  I think it’s obvious that there is very little appetite in Kosovo in any community for a grand exchange of populations, of big change to the borders, I just don’t see it. Now, is it possible that once the dialogue resumes there would be some technical discussion about border demarcation—adjustment to the borders? That’s up to Kosovo and Serbia to decide, again we would not reject that out of hand.  As a professional diplomat I think it’s important for negotiators to be able to talk about problems and the fewer limitations anyone places on what can be discussed at the table, the better.

Radio Kosova 2:  The Special Chambers in The Hague seems to have intensive-like work lately.  So what do you expect from that court?

Ambassador Kosnett: We think that Special Court plays an important role in not just in pursuing justice on behalf of individual victims, but in making clear that Kosovo as a nation is not afraid to look at its past.  We think it’s a very important institution and I think that it’s going to prove its value in the months ahead.

Radio Kosova 2:   Just one more question for the end. What’s the future role of the U.S. in the dialogue between Kosovo and Serbia?

Ambassador Kosnett:  The US administration is committed to supporting the dialogue and to supporting all efforts to build cooperation between Kosovo and Serbia. Once an agreement is reached by the parties we will be there to help ensure that the parties keep their promises.  I think the people of Kosovo from all communities can be confident that the United States will stay with you every step of the way.

Radio Kosova 2: Thank you very much.