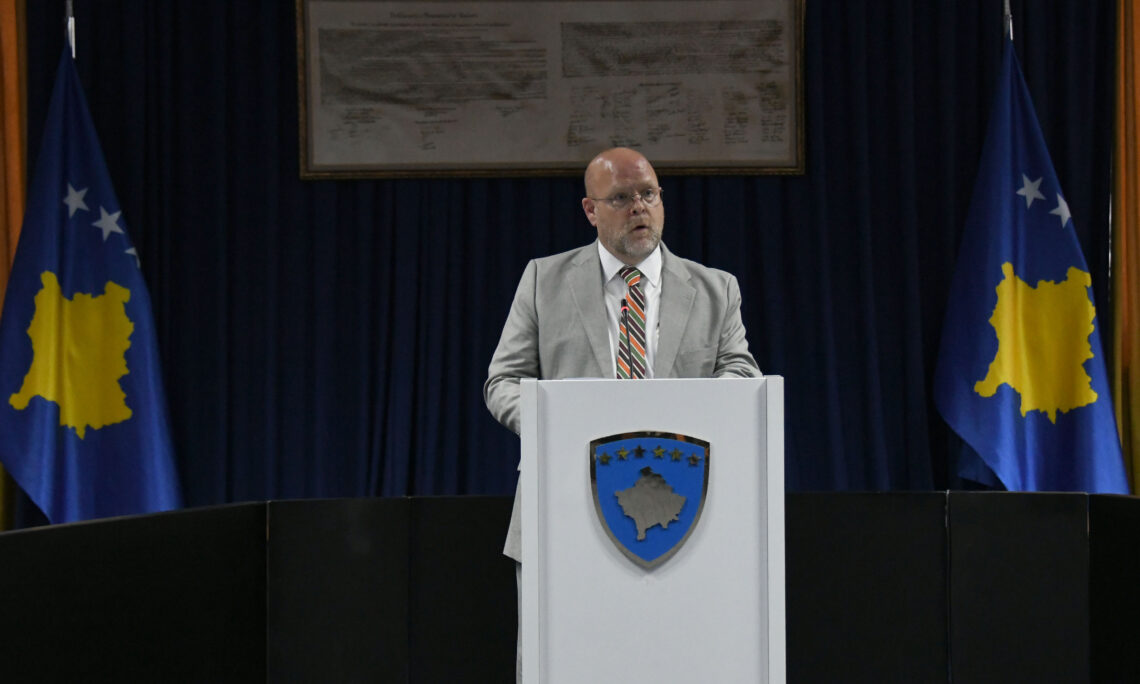 Mr. Hajredini thank you for hosting this ceremony and bringing us together to celebrate Pride week.

First and foremost, today we recognize and celebrate the strength of Kosovo’s diversity and the contributions of LGBTQI+ persons here in Kosovo and around the world.

While we should celebrate the progress that the United States, Kosovo, and other countries have made, we recognize that much work remains to advance and secure human rights for LGBTQI+ persons.

After all, LGBTQI+ rights are human rights.

In the United States, Pride month commemorates the Stonewall Uprising, an act of courage that gave birth to the modern LGBTQI+ movement.

On that fateful day in 1969, LGBTQI+ people at the Stonewall Inn in Greenwich Village in New York City fought back against police mistreatment and discrimination, ultimately leading to greater recognition of LGBTQI+ rights in the United States and in other democracies around the world.

As Secretary Blinken has said, “countries are stronger when all people – regardless of sexual orientation, gender identity or expression, or sex characteristics – are fully recognized as free and equal members of society. “

This goal – ensuring all persons are fully recognized as free and equal members of society – is within reach, but difficult work remains.

Disadvantaged and underrepresented groups — including the LGBTQI+ community, women, and ethnic minorities — are still unable to live their lives in peace and security. They continue to struggle – often facing discrimination, threats of violence and hate speech.

This is inconsistent with our values and not the world we want to see. We must all do more to protect and secure human rights for LGBTQI+ persons and other groups who continue to struggle to secure basic human rights, freedom, and dignity.

Achieving this vision is an incremental process and these issues and how they are discussed publicly can be challenging for societies.

I want to emphasize the importance of ensuring that the rhetoric that is used in such public debates be conducted with civility and respect. Improvements in human rights are an evolutionary process, and as I pointed out earlier, LGBTQI+ rights are human rights.

I can assure you the United States is committed to uphold human dignity for all people and advance equality globally.

At the U.S. Embassy Pristina, diversity, inclusion, equity, and accessibility are a top priority to advance the interests of the American people. It’s also the right thing to do.

This Pride Month, we proudly raised the Pride flag at our embassy campus and at my residence.

Our community members from across U.S. government agencies will participate in civil society-organized Pride week events in support of our shared vision of equal rights for all LGBTQI+ people.

Our commitment extends beyond an annual parade or a week of activities. It’s not about a day, a week, or a month. As President Biden has said, “the United States must lead the world not only through the example of our power, but through the power of example.”

In that regard, and with humility, I want to acknowledge that we have work to do at home. We are always striving to become a more perfect union. And, there is no greater shared democratic value, no greater promise to keep, than ensuring all citizens enjoy the same rights and freedoms.

As a multiethnic democracy, Kosovo also has a part to play, an example to set. Kosovo leaders, as well as citizens, rightfully take pride in the progress you have made in the short 14 years since your independence.

United States’ is never complete – it requires constant attention. Work not just by the government, but by each and every citizen.

The United States remains Kosovo’s steadfast partner in this democratic project. But ultimately, the people of Kosovo must ensure that all Kosovan citizens are recognized and treated as equal members of society.

We hope you learn from the United States’ struggles over the past 246 years – our failures and our successes – and continue the necessary work to ensure legal protections for all underrepresented groups, including the LGBTQI+ community.

I want to thank you again for the opportunity to speak here tonight. My Embassy colleagues and I look forward to joining you throughout the rest of Kosovo’s Pride Week activities, and we’ll also be sharing some U.S.-led activities during our Pride Month in the United States.