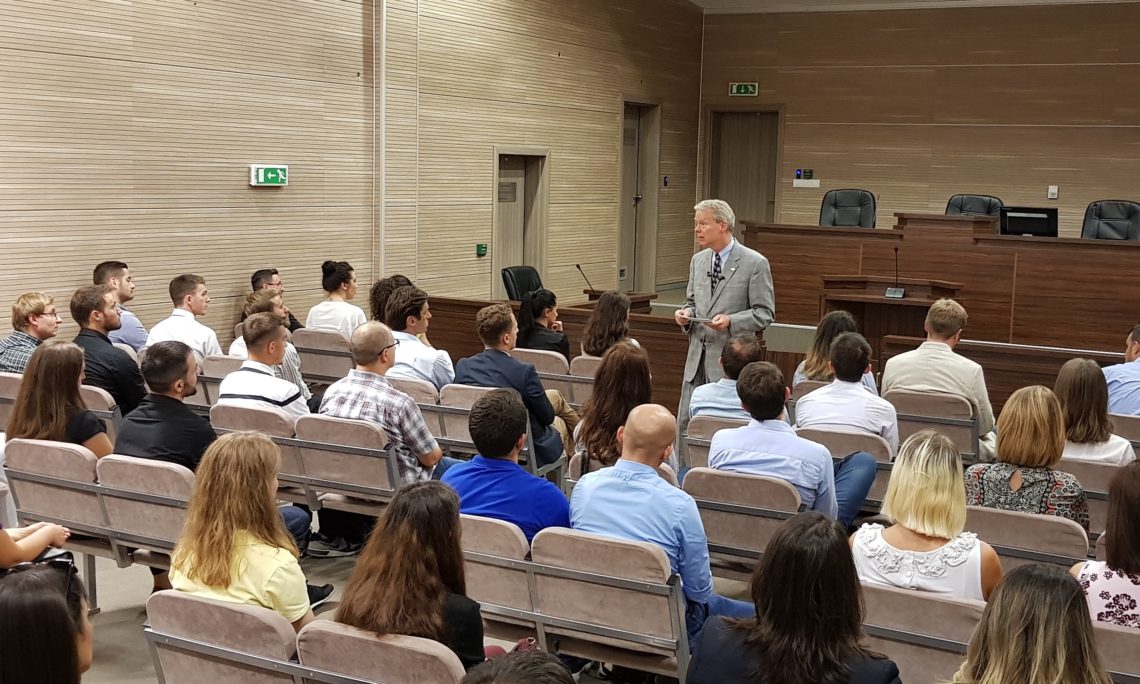 Good afternoon everybody. I’m here at the Palace of Justice talking with law students and young people who I hope will become Kosovo’s courageous leaders of the future. And I’m talking to them about rule of law and fighting corruption at its source. It’s well-known that this is one of my highest priorities, and I hope to inspire these students to make it one of theirs. Our large rule of law team at the embassy is committed to carrying this priority forward with Kosovo partners.

I think Kosovo can be proud of real and recent progress in the rule of law.

Municipalities just started implementing open contracting with USAID assistance. This initiative is now extending to the national level. The Public Procurement Regulatory Commission has committed to making all government contracting open and public in Kosovo – which will make this country a regional leader.

These guidelines will help judges resist external pressures to be lenient on those who have political connections, and instead apply consistent penalties on convicted individuals across the country. Kosovo’s institutions and its government have also worked hard to integrate courts and extend justice to all citizens – I have seen it and the European Commission recognized it with its statement that Kosovo met the visa liberalization requirements.

But much more remains to be done. And, it seems to me that of all the times I’ve been motivated to engage publicly on fighting corruption, this particular moment feels to me, truly urgent.

The War Veterans’ Pension case calls up Kosovo’s wartime past, has significant implications for the state budget, involves allegations of high-level fraud and corruption, and implies there has been political interference and intimidation – including within the justice sector institutions.

And since EULEX recently handed over full responsibility for the judicial sector to Kosovo institutions, there is no one else to look to. Kosovo owns its justice system today. If it does not do the right thing, no one else will. Considering all I’ve just described, I believe Kosovo has arrived at a major turning point.

So, there are two important issues that I think must be urgently addressed.

First, we have seen allegations of high-profile fraud among senior public officials to approve veterans’ status for individuals – starting with 19,000 of them – who, to all appearances, should not have been eligible for benefits. We’ve heard that some applicants openly stated that they were children at the time of the conflict, or faced medical issues that unrelated to the war.

Yet, a handful of officials granted them benefits anyway, outside the criteria of the law. That’s what this case is about – the decision-makers in power who disregard the law.

I expect further investigation and action to eliminate the massive gap between the number of pensions and the number of fighters identified after the war. We checked the archives in Washington, and Kosovo never claimed more than 15,000 KLA fighters. It’s astonishing that the number of beneficiaries, 20 years after the conflict, are going up, not down. It just doesn’t add up.

Second, we’ve seen overt political and institutional intimidation, in the form of threats and personal attacks against a prosecutor – behavior that only supports his claims of threats and political pressure as the reasons for his resignation.

Leaders’ statements, fortunately, have evolved in a positive direction in the last few days, by acknowledging that this case must proceed.

Still, we cannot ignore that intimidating behavior has already occurred. This creates a hostile environment for any future prosecutor or judge who ultimately sees this case – or any other politically sensitive case – through to conclusion.

This kind of threatening behavior is completely disrespectful of the public trust accorded to Kosovo’s leadership. And, the public is clearly tired of the excuses, the blame-shifting, and the refusal to take responsibility.

Kosovo needs courageous leaders to treat seriously these corruption allegations, acknowledge that politically-connected people might be involved, and commit to the public to let the case go forward. These courageous leaders should see this as a great opportunity to earn public trust and to begin to restore faith in the justice system.

Kosovo needs courageous leaders. Because Kosovo will be judged – by its own citizens, by European governments, and others like me who are watching – not on the fact that a high-level corruption scandal exists, but on how it deals with the problems that this case has exposed.

Ignoring or forever delaying the War Veteran’s Pension Case and others that involve serious corruption could rapidly undo the last 10 years of progress. But, at this turning point, there is another choice.

Politicians must guarantee the prosecution and judiciary its rightful independence, free of intimidation and inappropriate influence, to pursue this case and others at the highest levels – even if it means going after prominent personalities.

And then prosecutors and judges must do their jobs without fear or favor.

Success would be a process that ensures each side has a fair and equal opportunity to be heard, and decisions are made based on evidence rather than political expediency.

In the end, moving forward on this case is the right step toward honoring Kosovo’s veterans, ensuring the budget doesn’t go bankrupt, and demonstrating government maturity.

Success also means Kosovo must develop a political and public service system that rejects intimidation of the citizens who are entrusted to safeguard accountability and justice. Civil society is already helping to accomplish this.

Kosovo’s journalists and civil society organizations are entering a new era of professionalism and maturity. I can’t think of a more important achievement at a country’s tenth birthday than having a robust, independent, and courageous press.

And you’ve achieved that. Your journalists are showing that they are the most effective institution at holding public officials accountable. Your vocal and active civil society organizations are hosting dynamic debates on relevant issues, developing online tools to make government activities more transparent, and demanding better performance from the government. This is courageous leadership. These individuals and organizations are systematically shining light on difficult issues and demanding accountability.

Institutions must also do their part to protect the mission of justice. The Law on Disciplinary Liability package must pass its second reading in the Assembly this fall. The law will ensure the integrity of the justice system by providing an address for misconduct by judges and prosecutors. Kosovo needs this because as many of us know, the current system does not penalize prosecutors who don’t show up for hearings, or judges who hold sessions without all appropriate people present. And criminals walk free among you as a result.

The Whistleblower Law must also clear the Assembly to combat the culture of impunity and protect from retaliation those who file grievances. And institutions internally must reward, not penalize, their highest performers. It’s these high performers who will become Kosovo’s next generation of heroes by holding people to account on behalf of citizens.

My call to action today is meant equally for the courageous leaders of Kosovo and for the citizens of Kosovo. I urge you all to expect more, demand more, and deliver more. Do not succumb to the cynical view that corruption is everywhere and nothing can be done. And, while I can assure you that I and my colleagues will keep the pressure on in public and in private – it’s really up to the people of Kosovo to demand that your leaders and your institutions deliver fair and effective justice.

I know you want this. I know there are good people in government who want this. And I know you can achieve this by raising your expectations and demanding they be met. It will take many courageous leaders willing to do the right thing, especially when it is politically difficult. But it can happen. And your country will thank you for it. Thank you very much.