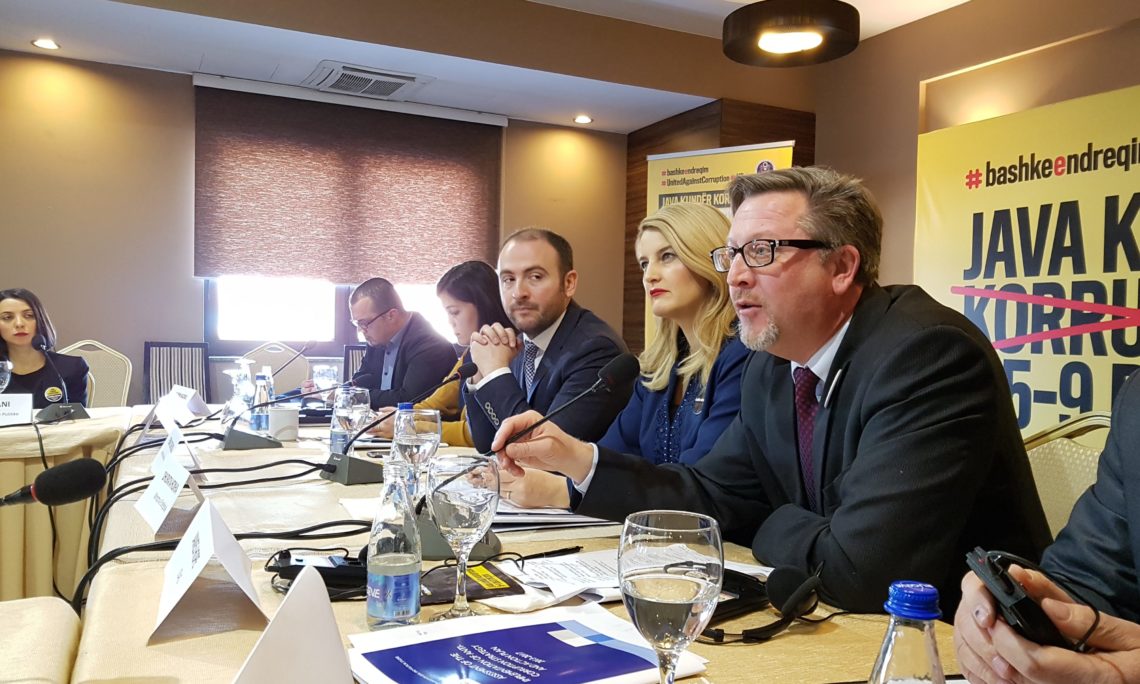 USAID Mission Director James Hope Remarks at the “Level of Progress in the Implementation of the Anti-Corruption Strategy” Panel, October 8, 2016

Thank you for the opportunity to participate in this discussion.  And thanks to GLPS, Çohu and KDI for organizing this important event.

All week, representatives from the Government, civil society and the international community have come together to discuss the problem of corruption in Kosovo.

We have highlighted the importance of fiscal transparency, the role that the justice sector must play in the fight, and the need to create a public record of political party financing.

I think it is fitting that our final discussion encompasses all of these pieces, as we discuss the implementation of the Anti-Corruption Strategy.

And the Strategy couldn’t be more important, because corruption is one of most important challenges facing Kosovo.

We see the toll it takes – that it deters foreign investment, impedes job growth, undermines the rule of law, and erodes citizens’ faith in their government.  In short, it prevents Kosovo from reaching its full potential.

Corruption comes in all forms.  And so the Anti-Corruption Strategy addresses issues from all sectors of government – both national and local – as well as the private sector, civil society and the media.

It’s an effort that requires, as Ambassador Delawie has said, “a whole of government and a whole of society approach.”

But despite the challenges, I see progress being made throughout Kosovo, in many of the areas are outlined in the Strategy.

For example, we have worked with the Government of Kosovo to combat corruption in public procurement, and we’ll redouble our efforts by helping local governments implement e-procurement applications, and increase the amount of public information about municipal budgeting and decision-making.

We have also strongly supported efforts to increase the efficiency, professionalism and integrity of law enforcement, prosecutors and the judiciary through our Justice Sector Strengthening Project.

Kosovo now has a code of ethics for judges that complies with the Bangalore Principles, as well as regulations defining judicial misconduct.  And just this October, Ambassador Delawie helped launch a new Public Integrity Initiative whose goal is to mobilize judges and citizens alike to commit to a culture of integrity and accountability.

I also believe we’ve seen this week the desire to strengthen cooperation between public institutions and civil society to monitor the implementation of anti-corruption policies.

This is important, as there is still much work to be done, because a strategy is only as good as its implementation.

I encourage both the Government and civil society to treat the Strategy as a living document – reflective of the progress made, but also incorporating the feedback of challenges still to be overcome.

day’s conversation is a great start, we’re proud to partner with you on this, and I look forward to today’s discussion.