Home Home | Our Relationship | Policy & History | History of the U.S. and Kosovo

The United States first opened a U.S. Information Service Office in Kosovo in 1996. Between 1999 and 2008, the U.S. Office Pristina operated as the diplomatic mission of the United States in Kosovo. After Kosovo’s independence in 2008, the United States officially established diplomatic relations with Kosovo and the Office became an Embassy. In September 2012, the United States joined International Steering Group partners in recognizing the enormous progress Kosovo has achieved, including upholding its commitments to implement the provisions embodied in Special Envoy Ahtisaari’s plan and enshrining these into Kosovo law, thereby declaring the end of supervised independence and dissolution of the International Civilian Office.

Since 1999, the United States has contributed troops to the NATO-led Kosovo Force (KFOR), tasked with maintaining a safe and secure environment and freedom of movement for all of Kosovo’s citizens. The United States also contributed staff to the EU Rule of Law Mission (EULEX) since its deployment in 2008, marking the first time the United States participated in an EU Common Security and Defense Policy mission. 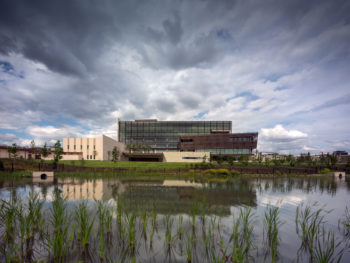 The U.S. government has invested about $2 billion in Kosovo since 1999, and on July 4, 2019 dedicated  and later moved into the newly constructed multi-million dollar Embassy building located at the 12.4-acre site in the Arberi district of Pristina, surrounded by an eclectic mix of buildings ranging in height, materials, and uses.

The U.S. Embassy building not only presents the U.S. Government’s diplomatic platform, but also enhances its mission by providing a secure, sustainable, and technologically advanced example of American architecture, engineering, and urban design.

Info about the U.S. Embassy Building