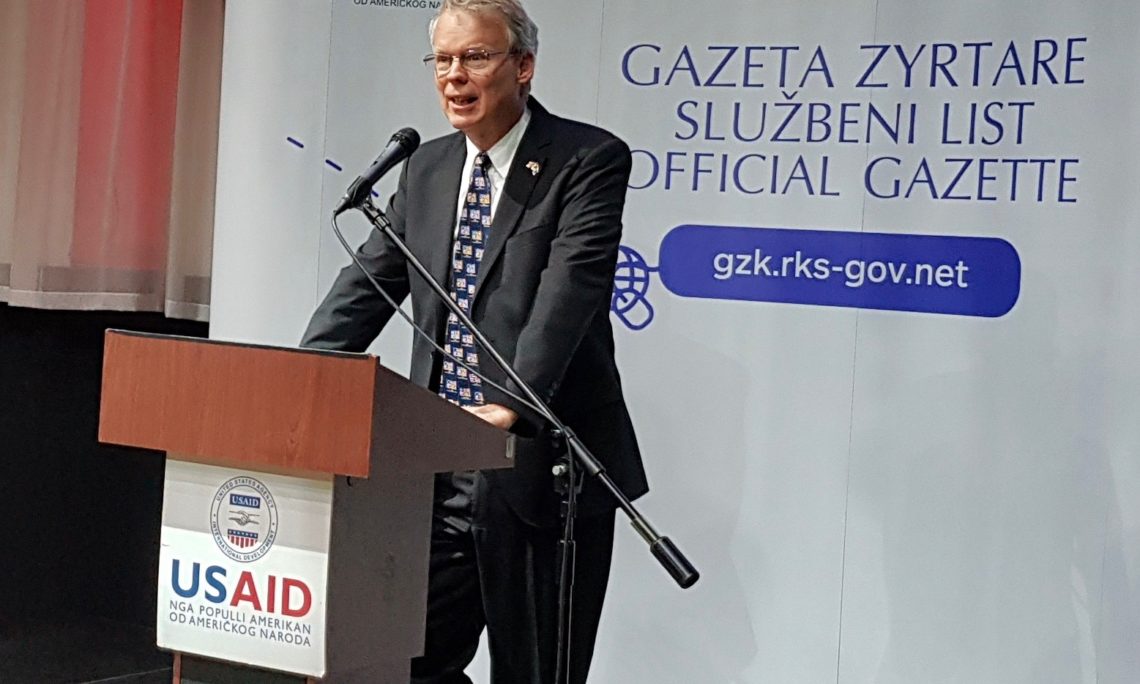 It’s great to be here. Prime Minister Haradinaj, Ministers, diplomatic colleagues, thank you for being part of this event, and thank you to everyone who helped make this day possible.

I believe so deeply in our partnership with Kosovo, and I have a lot of opportunities to tout the good work we do together. But, I admit that the Official Gazette is a particular favorite of mine. This is actually the second time this fall that I’ve spoken at an event about a database, and that’s because databases aren’t just about technology – they’re about connecting people to information, and there are few things in this world more powerful than a well-informed public.

It seems appropriate that we’re getting together just a couple days before the official start of anti-corruption week. I can’t think of anything more fitting to help kick that off than a public outreach campaign to ensure that all of Kosovo’s people have access to the information they need, to make informed decisions as citizens, and to advocate for themselves and their communities.

The Official Gazette is not just a record of legislative and regulatory actions. It’s part of a broader effort to open the Government of Kosovo up to its public. Just a couple weeks ago my colleague, Jim Hope, spoke at an event inaugurating the Assembly’s new legislative tracking system. And just last week, the United States and Kosovo formally launched the MCC Threshold Program, which includes a focus on transparent governance. I see these kinds of efforts as critical for reducing the barriers between the government and the people it works for, and fostering a culture of transparency and accountability.

So now that the Gazette is upgraded, accessible on our phones and tablets at the touch of a button, at no cost. That’s exactly as it should be. The more we democratize information, the more we ensure that it’s free, unrestricted, and as easily accessible as our own pockets, the better chance we have to understand and solve our problems.

This is just as true for Kosovo’s growing business community as it is for private citizens. Much of Kosovo’s future development depends on private sector-led growth, and while individual businesses may need to take risks, they thrive in stable environments, bound by the rule of law, resting on legal certainty and transparency.

The same goes for attracting foreign investors, who will rightly expect to understand how their legal rights and interests will be protected in Kosovo before placing their capital on the table.

Just a month ago, we all celebrated a pretty good indication that Kosovo is on the right track in that regard, as we watched it jump up 20 places in the World Bank’s Doing Business Report. It’s a remarkable achievement and that was a good day, but it doesn’t mean the work is done. Kosovo simply doesn’t have time to be complacent. We need to take the good days and build on them, we need to take advantage of new innovations and technologies that foster openness, but we can’t rely on technology alone. We need to get the word out across Kosovo that these changes are happening, and that information is available that can help people become more active, engaged citizens.

The new outreach campaign for the Official Gazette is such an important part of this. As Bill Gates has said: “connectivity enables transparency,” and so I applaud the efforts of the Office of the Prime Minister and USAID’s Partnerships for Development program, and all those whose time and talents are helping to better connect and empower Kosovo’s citizens.

In the coming week, as I have since I arrived here, I’ll have a lot more to say about the very real challenges Kosovo faces in fighting corruption and cronyism. There’s plenty of work still to be done, but for now, congratulations to everyone on a very good day.