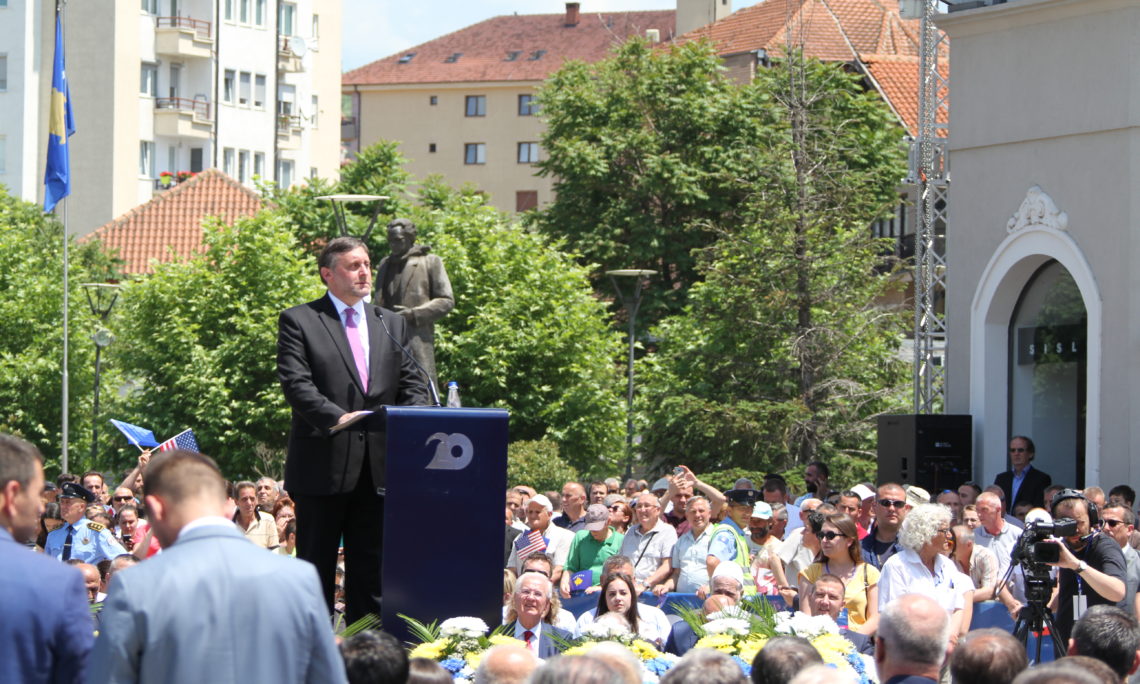 Today we mark the 20th anniversary of the conclusion of NATO’s Operation Allied Force and the arrival of NATO’s Kosovo Force, KFOR.

We acknowledge with respect NATO Allies’ commitment and sacrifices here these last 20 years.  Without KFOR providing a safe and secure environment and freedom of movement in Kosovo, efforts to secure a lasting peace and promote reconciliation would be fruitless.

NATO’s intervened after all other diplomatic and political efforts were exhausted.  The United States supported this action only as a last resort, after we made every diplomatic effort to compel the Milosevic regime to end its brutal campaign of atrocities.

Those assembled here know all too well that the circumstances in 1999 demanded action to end the severe humanitarian catastrophe that was unfolding.

The goal of NATO’s intervention was clear and limited in scope: to save innocent lives and preserve peace, freedom, and stability in Europe.

On this solemn anniversary, we remember the many people who were displaced, injured, killed, or went missing.  We offer sincere condolences to all those who lost loved ones.

Today, let us renew our pledge to honor their memory by working together to build a future of peace and prosperity for their children and grandchildren.

Twenty years ago it would have been difficult to imagine that today we would gather here, in Europe’s youngest capital, to celebrate the milestones reached and look optimistically toward the future.

Kosovo’s citizens have demonstrated their country can be a reliable partner for the international community, committed to building democratic institutions, and advancing on the path of Euro-Atlantic integration.

U.S. support for a sovereign, independent Kosovo remains firm and advanced the goal of a stable, secure, and prosperous Western Balkans.  This policy has long enjoyed bipartisan support in America and we are proud of the enduring investments the American people have made in Kosovo’s development.

We reject the cynical concept that the only way to move the region forward is by turning the clock back on Kosovo’s independence.  Similarly, we reject the idea that Kosovo’s future lies in merger with another state The purveyors of such notions would have you believe that Kosovo is incapable of maturing into a fully independent member of the international community and serving as the anchor of stability in the region the U.S. believes it can be.

On the 20th anniversary of the end of the war and the arrival of KFOR, it is time to shift attention from the past, to what lies ahead.  Today, I challenge you to consider what a brighter future for your young country looks like.

Because ultimately, it is up to the citizens of Kosovo to define your own destiny.  The United States will be by your side, but the days are long gone when the United States, the EU, NATO, or the UN will – or should – step in to shoulder burdens or make decisions that are the responsibility of Kosovo leaders and citizens.

Building a better future for this country depends on an unassailable commitment to cement the rule of law as its foundation.  A strong democracy demands transparent governance, accountability for all, and the rejection of impunity.  The well off or well-connected should not have special privileges when it comes to the consistent application of the law.

Leaders must tackle the country’s real and pressing economic challenges – creating energy security and a business climate in which local entrepreneurs as well as foreign investments can thrive, and harnessing the talents and aspirations of this country’s youthful population.

Progress also requires a redoubled commitment by leaders in Pristina and Belgrade to work together to ensure the protection of national minorities and deliver accountability to those responsible for war crimes and human rights abuses.

Pristina and Belgrade must also work together on behalf of all victims and their families to ensure access to justice and to provide full information about the fate of their loved ones.

Leaders must put aside nationalist rhetoric and historical revisionism.  These desecrate the memories of victims, re-open the wounds of survivors, and work against progress toward transparent, democratic, and accountable government.

As we have for the last 20 years, the United States stands by Kosovo’s side to encourage progress.  But it is time for Kosovo to strengthen its own efforts to achieve an enduring peace by reaching a comprehensive normalization agreement with Serbia, centered on mutual recognition.  This is the only way to bring a final close to a dispute that holds back both countries from unlocking their potential.

Success will require that Pristina and Belgrade remove barriers and return to negotiations with the flexibility and spirit of compromise necessary to secure an agreement that improves the lives of citizens in both Kosovo and Serbia.

Kosovo and Serbia will always be neighbors, inextricably linked.  Normalization is vital to unlock both countries’ European futures and is essential to setting the region on a path toward stability, security, and prosperity for all.

To those who would back away from the challenge, that believe that better conditions may come to negotiate a better agreement down the line, let me emphatically say that there is no better time than now.  Greece and North Macedonia’s recent, historic reconciliation demonstrates that for courageous, forward-looking leaders it is possible to put aside corrosive disputes of the past.

We urge Kosovo to draw on the same fortitude, resilience, and strength it has demonstrated repeatedly over the last 20 years and show the courage needed to break this impasse.

The status quo in the Balkans is not sustainable.  If Kosovo is not moving forward, it will drift backward.  Everyone loses from the current deadlock.

Break the cycle of provocation and retaliation that leads only to growing isolation.  Abandon the petty partisan gamesmanship.  Seize the opportunity to engage in what it will take to secure a brighter future.

The United States stands ready to assist in realizing this shared objective.

So today, we honor the memory of those who sacrificed so much two decades ago.  Let us also commit our energies to creating a Kosovo where all citizens can see their place and make their contribution to a hopeful, and prospering country.