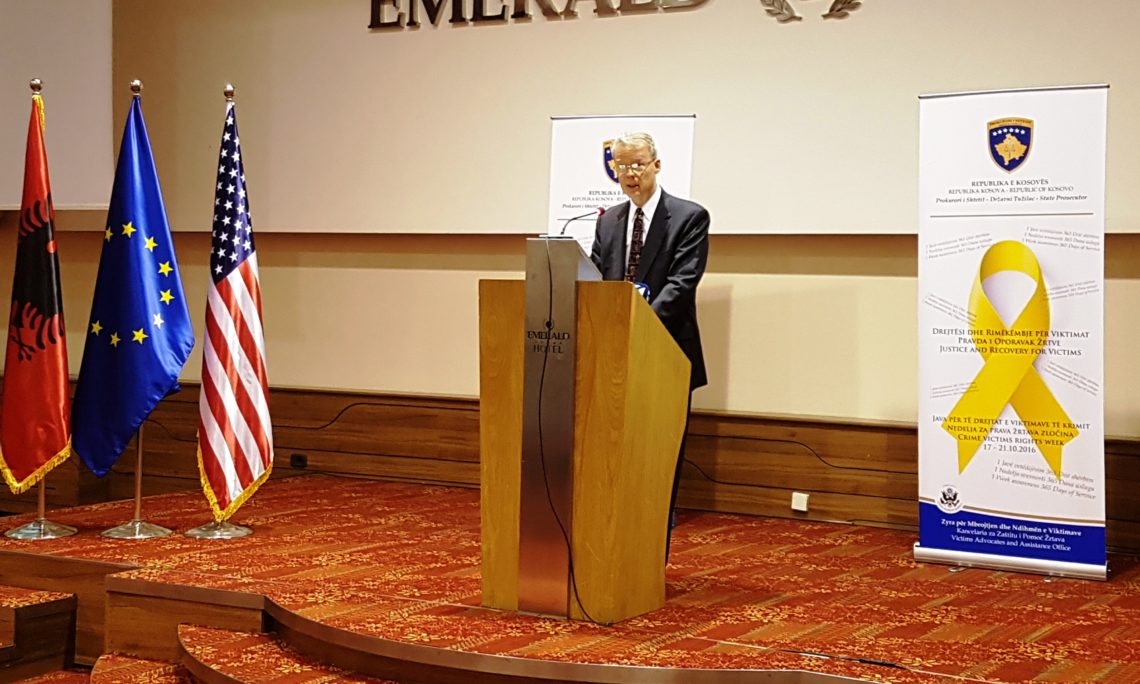 President Thaci, Minister Hoxha, Mr. Isufaj, justices and prosecutors, diplomatic colleagues, and honored guests. Good morning. This is an important annual event for Kosovo and one that the American Embassy has strongly supported since it began seven years ago.

Since I arrived in Kosovo, I have spent a great deal of time talking about the fight against corruption. I have encouraged the government of Kosovo and the judiciary to implement programs to prevent it, to increase transparency, and to punish those that threaten Kosovo’s future and its prospects for European integration.  Most of those things focus on preventing corruption from happening in the first place.  While it is extremely important to do that, the reality is that it’s impossible to completely eliminate crime – it’s going to happen.  And when it does happen, it’s important that in the rush to find and prosecute the perpetrator, to make society safe, that the victim isn’t forgotten.

In the aftermath of a crime, there is shock and devastation, trauma and fear.  There is confusion about what is happening now, and what will happen in the future.  But there is a path of help, of hope and of healing that is paved each and every time someone reaches out to help a victim of crime, and to provide support to someone who is hurting. If you were to ask ten people on the street what justice means to them, you might get ten different answers. But if you were to ask ten victims of crime what justice means to them, I bet you would get pretty similar answers. To victims and survivors of crime, justice simply means that they are treated with respect, that they are listened to and actually heard, and that they will have a voice in vital decisions that are made related to their cases, as well as to their lives.

Kosovo has made significant progress in making sure that those needs are met and demonstrated that it is a leader in the region – an example that others should aspire to. We are proud to have supported the Victim Advocates in the Prosecutor’s office in becoming an effective voice and support mechanism for victims as they negotiate the complexities of the justice system. The Advocates are vitally important to guarantee that victims’ needs are met both outside and inside the courtroom. We are also proud to have supported legislation that establishes a Victim Compensation Fund designed to provide financial support to victims. Ensuring that victims receive compensation to help them pay for medical bills and financial losses attributable to the crime, ultimately means that they won’t be victimized a second time. It goes a long way towards re-establishing some sense of normalcy in their lives and begins the process of healing. I encourage government Institutions to aggressively move forward with finalizing the creation of this office so they can begin to start processing applications and helping those that are so desperately in need – to begin the process of recovery, and in doing so, begin the process of justice.