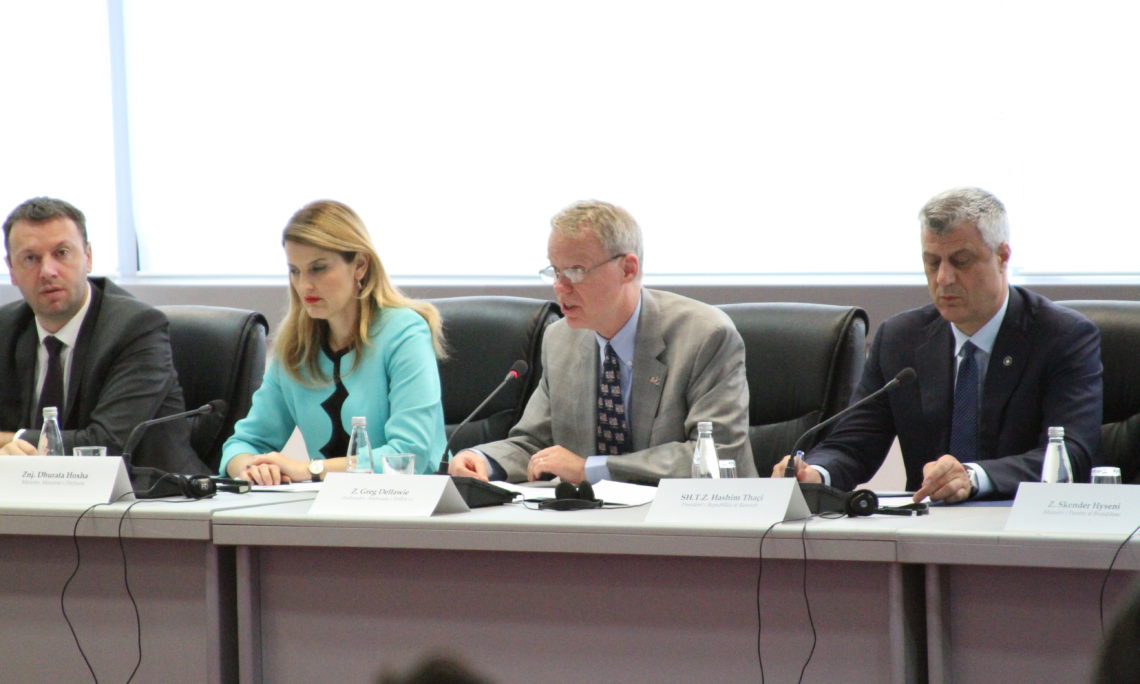 Thank you Mr. Chairman, Mr. President, Ambassador Apostolova, ministers, colleagues, and practitioners.  It is an honor to join you on European anti-trafficking day for the launch of Kosovo’s National Anti-Trafficking Awareness Campaign.

As Secretary Kerry noted this summer upon the release of the annual Trafficking in Persons report, there are 20 million global victims of trafficking.  These victims are everyday people who are robbed of their families and dreams by unscrupulous transnational criminal networks.  Trafficking fuels organized crime, instability, and in countries such as Iraq and Syria, funds terrorism.  Its victims are primarily women, and often children, who are exploited and commoditized.

Kosovo is making significant efforts to fight this crime, but there is still important work for the country to meet international standards for eliminating trafficking.  One of the key actions is support for victims.  In this sense, Kosovo’s 2015 Law on Preventing and Combating Trafficking in Human Beings is an important step.  The law needs to be fully implemented, however, including by establishing a victim compensation fund.  We commend efforts by the Ministry of Justice to draft a regulation and appoint a commission to review victim claims.  We hope to see the office fully functioning soon.  Compensating victims from the ill-gotten trafficking proceeds is a strong deterrent and the right thing to do.

We also believe it is important to have a strong social welfare system in place to support victim treatment and rehabilitation.  I applaud the Labor and Social Welfare Ministry for its work with municipalities and Kosovo’s shelter network to improve victim assistance measures.  This network must be sustainably resourced, and their staffs well trained.  We hope the government will move soon to establish a shelter in the northern municipalities of the country, and we welcome partnering with you in this effort.  We also hope more can be done to identify children subjected to forced begging, and to return them to school.

Our Embassy is proud to do our part by sending a group of five representatives – including Kosovo Police, shelter staff, government representatives, and victim advocates – to a program next month in Phoenix, Arizona through the Open World program.  These practitioners will learn firsthand about our public-private partnerships to combat trafficking, and how victims can regain their dignity.  In addition, I am pleased to have a branch of our U.S. ICITAP team working directly in the Interior Ministry to support the Minister of Interior and National Coordinator Radojevic’s leadership.  We hope other ministries can be equally energetic in tackling this problem that requires a whole-of-government approach.

Kosovo’s institutions continue to take positive steps in interdicting and punishing traffickers, including through the successful efforts of the anti-trafficking in human beings police unit.  Vigorous investigations should of course lead to prosecution and conviction of traffickers, including complicit officials.  We are encouraged by the recent conviction of a former municipal official.  We hope all Kosovo institutions will take a zero tolerance stance when officials have been implicated in trafficking.  Unfortunately, last year the government identified fewer victims and prosecuted fewer suspects.  Convictions were at a five-year low, and our anti-trafficking report noted judges imposed lenient sentences on convicted traffickers.

To address these issues, we support efforts being considered by the National Anti-Trafficking in Human Beings Coordination Council to rationalize the judiciary’s approach to counter trafficking.  Prosecutorial and judicial expertise is needed to confront this complex issue.  Ideally these reforms can coincide with prioritization of these trafficking cases, as well as advanced training for judges, prosecutors, and police.

We wish you continued success in combatting trafficking in persons.  The United States will remain your committed partner in this fight.