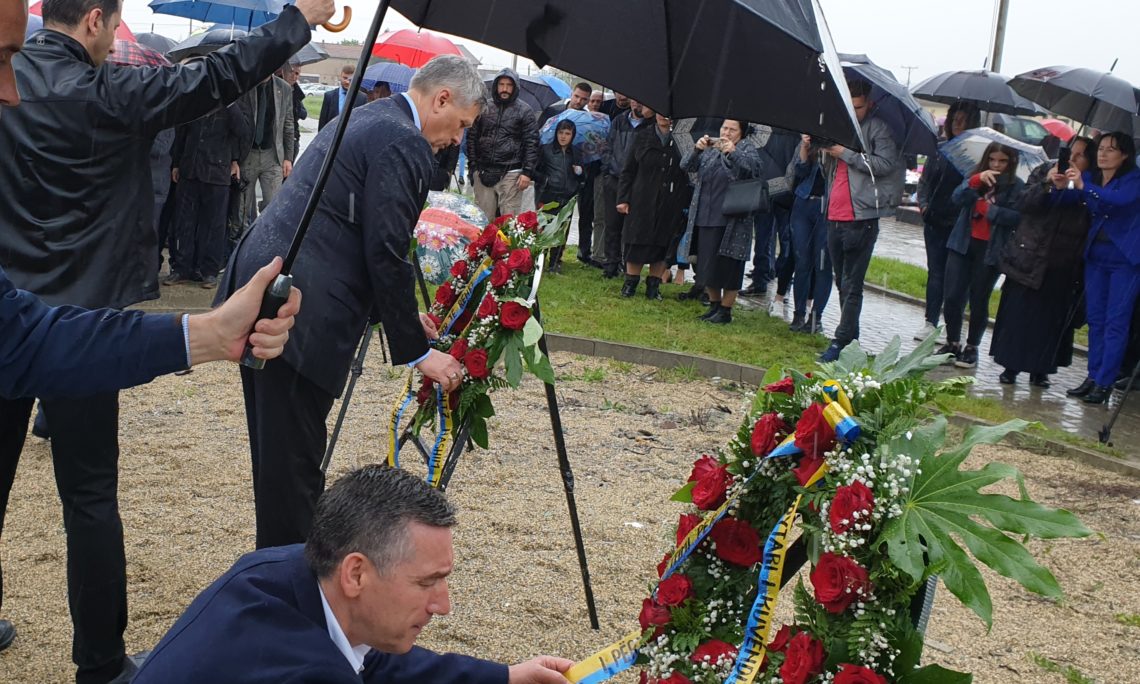 Ambassador Kosnett’s Remarks at the 20th Anniversary Commemoration of the Mejë/Meja Massacre, April 27, 2019

Mr. President, Prime Minister, Mr. Speaker, ladies and gentlemen. It is a privilege to stand with you today, representing the American people, to honor those who lost their lives here.

The reality of the crimes committed at Meje is so horrific that it is difficult to know what I can possibly say that will matter. I recall the words of President Abraham Lincoln, who wrote to a mother who had lost five sons: “I feel how weak and fruitless must be any word of mine which should attempt to beguile you from the grief of a loss so overwhelming.”

Nevertheless, please permit me to reflect on what your sacrifice means to the United States, and to offer some thoughts on how we can all seek to build a better future by forthrightly facing the past.

First, let no one forget or deny why the United States and our allies came to the defense of the people of Kosovo.

The United States actively participated in NATO’s necessary and legitimate use of force as a last resort to end the Milosevic regime’s campaign of ethnic cleansing, after the failure of sustained diplomatic efforts to achieve a peaceful solution.

The United States acted in support of defenseless civilians. We acted in the name of peace, freedom, and stability for the region. These goals reflect deeply held American values. We believe that all people, regardless of ethnicity or religion, deserve the dignity of living in freedom and security.

We know some would deny the well-documented reality of the atrocities committed at Meje and elsewhere in Kosovo. Denying these incidents desecrates the memory of the dead, reopens the wounds of the living, and sets this region back in its efforts to build democratic states at peace with each other. Acknowledging the crimes against humanity committed here and elsewhere in this country is vital to ensure they never happen again.

Second, let no one doubt the depth or the resilience of the friendship between the United States and Kosovo.

America’s support for the goals of peace, justice, and prosperity for Kosovo – and for Kosovo’s neighbors – endures. America’s commitment to Kosovo’s future constitutes a profound legacy for those who died to make Kosovo free.

Which brings me to my third point: the importance of facing the past to prepare the path to a better future.

Americans are proud of our country’s legacy of achievements over more than two centuries of independence. But our history has its dark chapters as well, including injustices against Native Americans and the oppression of African-Americans.

Over time, Americans have become better at acknowledging and learning from all of our history, the good and the bad, by improving the quality of our textbooks and museums, and becoming more open in our political discourse. For as civil rights activist Ida Wells said over a century ago, “the way to right wrongs is to turn the light of truth upon them.”

The trauma of Kosovo’s own past touches every corner of this country – north and south – and extends beyond its borders. I have seen the same pain we see here today in the faces of the families of missing persons, and of survivors of wartime violence, from many regions and communities.

So – for the sake of generations to come, I encourage the people of Kosovo, and your neighbors, to forthrightly acknowledge and discuss the darker moments of your shared history.

For some, this must mean acknowledging the reality of the Milosevic regime’s state-sponsored ethnic cleansing campaign in Kosovo, which resulted in the murder and disappearance of thousands, and ensuring full accountability for those responsible.

For all the people of Kosovo, it must mean holding yourselves and your democracy to a high standard and ensuring accountability for all individuals who committed crimes during and after the war, despite the bitter reality that many of the guilty elsewhere have thus far evaded justice.

And for both Kosovo and Serbia, it must mean a renewed commitment to locating and returning the bodies of the missing, by working in good faith with the international community to release and act upon all available information.

Ladies and gentlemen, the responsibility for guiding Kosovo toward a future of peace cannot be borne solely by political leaders. The burden also falls on you as free citizens in a democracy, and as survivors who know what it means to suffer violence on the basis of ethnicity, religion, language.

With the greatest respect, I ask that as you remember the crimes committed against your families and community, you also raise your voices on behalf of those from other communities who lost loved ones.

I ask that you reach out to those who share your pain and your sorrow, no matter their community, their language, their faith. I encourage you to meet with one another and find common ground.

For it is you, the survivors, who have the moral authority to speak out for a truly inclusive Kosovo, where all citizens feel at home and free to live, work, and worship together in peace with their neighbors.

It is you, the survivors, who have the strength to build a country, in the words of Kosovo’s own Declaration of Independence…

“Committed to confronting the painful legacy of the recent past in a spirit of reconciliation and forgiveness. Dedicated to protecting, promoting and honoring the diversity of our people.”

By working toward this vision, you carry forward the work that NATO started 20 years ago.

Allow me to leave you with the words of American poet Maya Angelou: “History, despite its wrenching pain, cannot be unlived. But if faced with courage, it need not be lived again.”