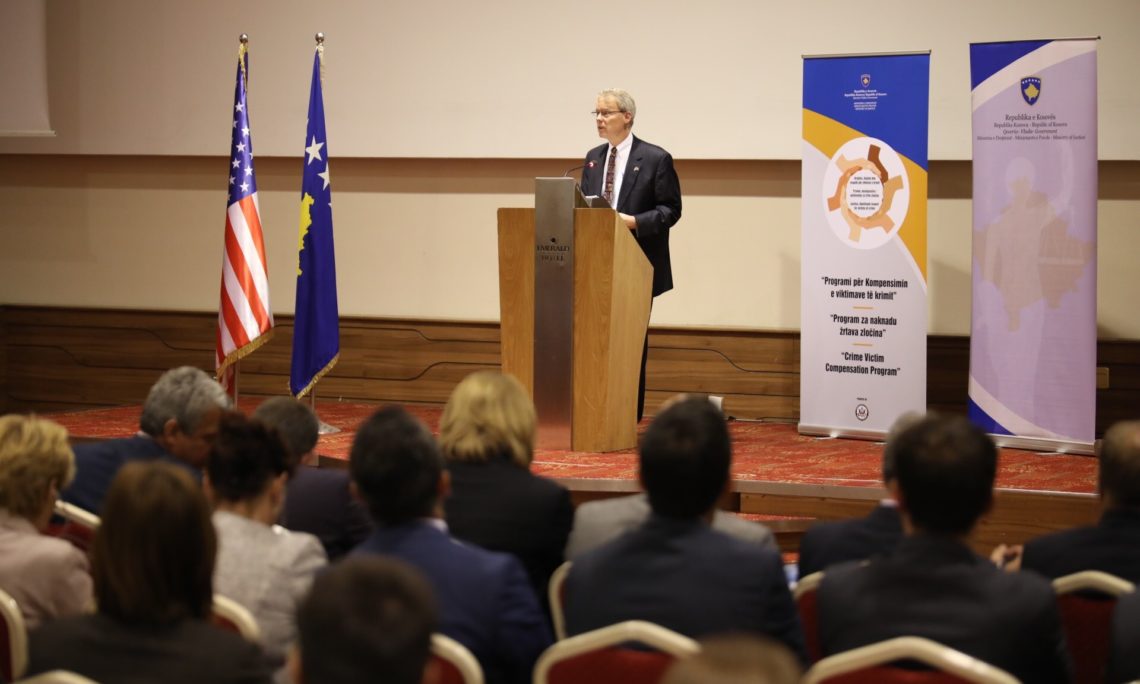 Ambassador’s Remarks at the Launching Ceremony of the Kosovo Crime Victim Compensation Program, May 22, 2017

Good morning Ministers, Chairman Idrizi, Chairman Isufaj, Chief State Prosecutor and honored guests. Many of you know that improving rule of law in Kosovo is the primary, the most important goal, that I have set for my Embassy in Pristina. Most of the time I talk about things like corruption, but there are other rule of law challenges here. I am very happy to be here for the launch of this important program.

The program is a step in Kosovo’s evolving justice system. After today, victims will finally be able to seek compensation from the state for their injuries. While this allows Kosovo to meet its international obligations, it is absolutely essential to help victims regain some of what was taken from them, to avoid being victimized a second time.

The process of victim compensation that was established in the Criminal Procedure Code in 2013. The Crime Victim Compensation Law was finally passed in 2015, but passage of the law was not enough. In fact there was still a great deal of hard work that needed to be done. The Compensation board needed to be established, complex regulations needed drafting and the program ultimately needed money. The Ministry of Justice, the Ministry of Finance and the Government of Kosovo worked together to ensure that the law would be functional and not just good intentions on a piece of paper. Now the program is ready to work. But one more thing needs to be done. It is absolutely imperative the crime victim compensation program be added to the budget to ensure that the program will be functional in the years to come. I hope that this is not overlooked in the future.

The United States Embassy, through the Department of Justice’s ODPAT program has worked continuously with Kosovo to establish and develop the Crime Victim Compensation Program. Our support included contributions to drafting the law, development of regulations to guide the Board, and trainings to prepare them for the work ahead. Additionally, we have trained judges, prosecutors and victim advocates on how the law works so that requests will be made and granted in a timely manner. And we will continue to work with them in the future.

Compensating victims and ensuring their security is imperative, but its only one part of the equation. Another important part of developing a robust criminal justice system is taking the profit out of crime and that means asset forfeiture. That is perhaps the single most effective way to combat organized crime. And those seized assets can be used for good; to compensate victims, to build shelters for domestic violence victims or develop victim awareness programs in schools. I encourage the police, prosecutors and judges to use asset forfeiture as a tool to deter crime and help victims of violent crime.

I encourage all of you in the justice system to recall that your work impacts real people, not numbers, not names on a piece of paper, but the citizens of Kosovo. The victims you see did not choose to be victims. The Crime Victim Compensation Program is an important part of recognizing their experiences and giving them the respect and dignity they deserve.

Congratulations. I look forward to seeing the program in action. Thank you.