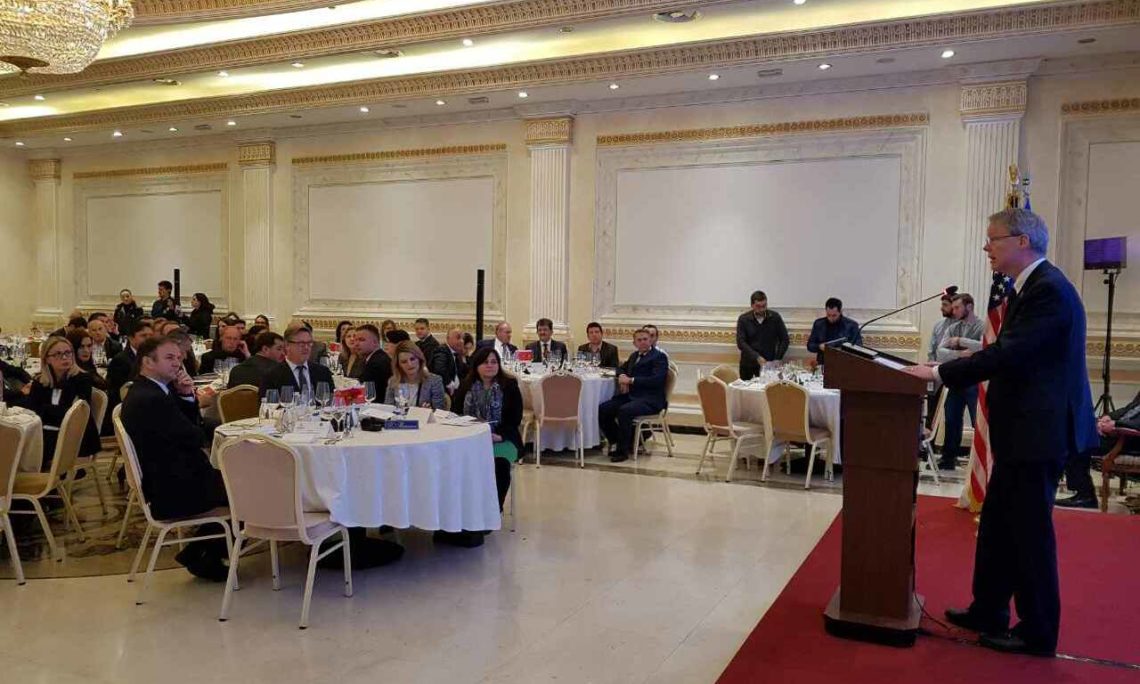 Ambassador Delawie’s Remarks at the Launch of the National Strategy on Property Rights, February 10, 2017

Thanks very much, Brian.

Wow.  It’s great to see such a great crowd today of people who have all worked on this important issue.  And thank you Deputy Prime Minister Kuci and Minister Hoxha for your incredible leadership on land and property rights reform.  We’re proud to work with you on this extremely important set of issues.

When I first arrived in Kosovo in the summer of 2015, I didn’t know yet that one of the most critical and personally compelling issues I would work on was kicking off that summer as well.

In June 2015, a dedicated, diverse group of people gathered to discuss the challenges of land and property rights reform in Kosovo.

Those early conversations amongst ministers and mayors, civil society, and citizens across the country, became the pillars of what I’m so proud to help launch today – a comprehensive, government strategy on property rights reform in Kosovo.

Now, let’s be honest.  This strategy is every bit as ambitious as it is critical.  But I’m tremendously proud of how hard you all have worked to get us to this moment – for building the awareness, momentum, and the consensus needed to create national-level solutions.

It may be that concepts like land use and zoning requirements don’t normally make people excited.  But today is an exception.  Everyone in this room is excited because we know that unlocking and resolving the complexities of Kosovo’s property system is key to so much of we want to accomplish together here.

Because we know that improving governance improves lives.

I keep in mind the example of a family man who spent 20 euro at the Cadaster to subdivide and register a parcel of land, but he wasn’t done yet.  After numerous fees, and forms for surveying, and notarization, his 20 euro fee had ballooned to 400 euros.  For too many, this sum of money is greater than a month’s wages, and well out of reach.

That is why I’ve been so adamant that progress on property rights is essential to a better future for the people of Kosovo, for economic development, women’s economic inclusion and empowerment, Euro-Atlantic integration, and progress towards the rule of law and human rights.

And the links between what we’re working on today and those larger goals are not merely conceptual.

Kosovo’s agricultural sector continues to thrive with new crops, new technologies, and ever higher yields.  And every year, more and more jobs are created all across Kosovo, reaching into every community.  But continued success in this sector demands rational land use policies, sound zoning, and a dramatic reduction in non-permitted construction.

This is also clearly a rule of law issue.  In fact, as I’ve said before, this would in some ways be easier if all that were required was a simple legislative fix.  Unfortunately, the body of laws governing land and property are difficult to implement clearly and fairly.

And so implementing this strategy requires that the legal framework be followed in a manner that is clear, consistent, and complete.  And in a manner that minimizes the many opportunities for rent-seeking behaviors that exist in a system where complexity is greater than transparency.

Again, not easy — as this in many cases will mean untangling generations of unclear claims, but it’s absolutely vital.

Vital to the rule of law, yes.  But also to the very spirit of entrepreneurship that I have the privilege to see up close every day I spend here.  All that Kosovo’s budding entrepreneurs and small business owners are asking for is an opportunity – an opportunity to pursue a new idea, grow a family business, or link to a new market.

And for that, they need access to credit.  But right now, too many cannot secure those loans using their own property because they simply can’t prove it’s theirs to begin with.  In short, as you rightly noted in your recent op-ed Deputy Prime Minister: “Informal rights in property create unrealized capital.”

And of course, wherever we see such pervasive problems as these, we know they will have a disproportionate impact on populations and communities in Kosovo that are the most vulnerable.

We know that minority groups are especially in need of property rights reform, and that too often citizens cannot exercise their rights, especially in cases where families have been displaced.

And of course, of course this has a disproportionate impact on women, who are not only forced to face the same legal gauntlet as everyone else, but a societal one as well. I think we’ve memorized the statistics – only 4% of women in Kosovo are able to inherit land, and only 19% own land.

And we’re all too familiar with the informal practices that prevent too many women from inheriting, owning, and registering property.

The toll of this is hard to calculate.  What does it mean when one-half of Kosovo’s population is deprived of economic empowerment, deprived of opportunity, deprived of the ability to speak up on their own behalf, or that of family and community?  What is the opportunity cost of this kind of inequality?

I’ve said before that property rights are human rights, and as former president Jahjaga stated just over a year ago in a speech on this same subject: “Human rights are not a special privilege of a particular group of society.”  That may be a self-evident truth, but it’s one that we still work to live up to, not just in my country, but in Kosovo as well.

I know you’re all here today because you want this strategy to work as much as I do.  That you have all, in fact, been working on this problem together for years in many cases, and certainly with great intensity over the last 18 months.

The efforts of so many, all designed to raise awareness and demonstrate the importance of this challenge.

All, in fact, building towards today.  As a group, you have been Kosovo at its best: determined, inclusive, tireless, and always, always working for your fellow citizens.

Because citizens need to know their rights, need to have faith in a system to uphold them, and need to have the will to assert them.  Officials in turn must be willing and able to safeguard them.  That’s the basis of any civil society.

This strategy is a testament to the hard work of multiple ministries and stakeholders coming together to resolve problems to focus on concrete recommendations.

You must continue to coordinate and communicate to get the work done.  The difference made in people’s everyday lives is how the strategy will ultimately be judged.

And so here’s a challenge to all of us – even as we celebrate this achievement today.  Because now is not the time to rest and reflect.  Now is the time to double down on our commitment to this issue.  We’ve laid the groundwork, we’ve raised awareness, we’ve identified the challenges and the steps needed to address them.  All that remains is the doing.

We need to support the Steering Group led by Deputy Prime Minister and fully implement this strategy.  We need to see parliamentary action on the body of inheritance laws submitted this fall.  We need to open the cadaster and let transparency play its rightful role, and we need to keep talking about this, raising awareness.

None of this will be easy, but every single part of it will be worthwhile.

I find optimism and resolve in the words of the great American anthropologist Margaret Mead, who assured us that we must “Never doubt that a small group of thoughtful, committed people can change the world. Indeed, it is the only thing that ever has.”

To the many thoughtful, committed people here today and throughout Kosovo that have dedicated themselves to this issue, I offer you my thanks and our continued partnership.

I’m proud to stand here with you.  Now let’s all get to work.  Thank you very much.