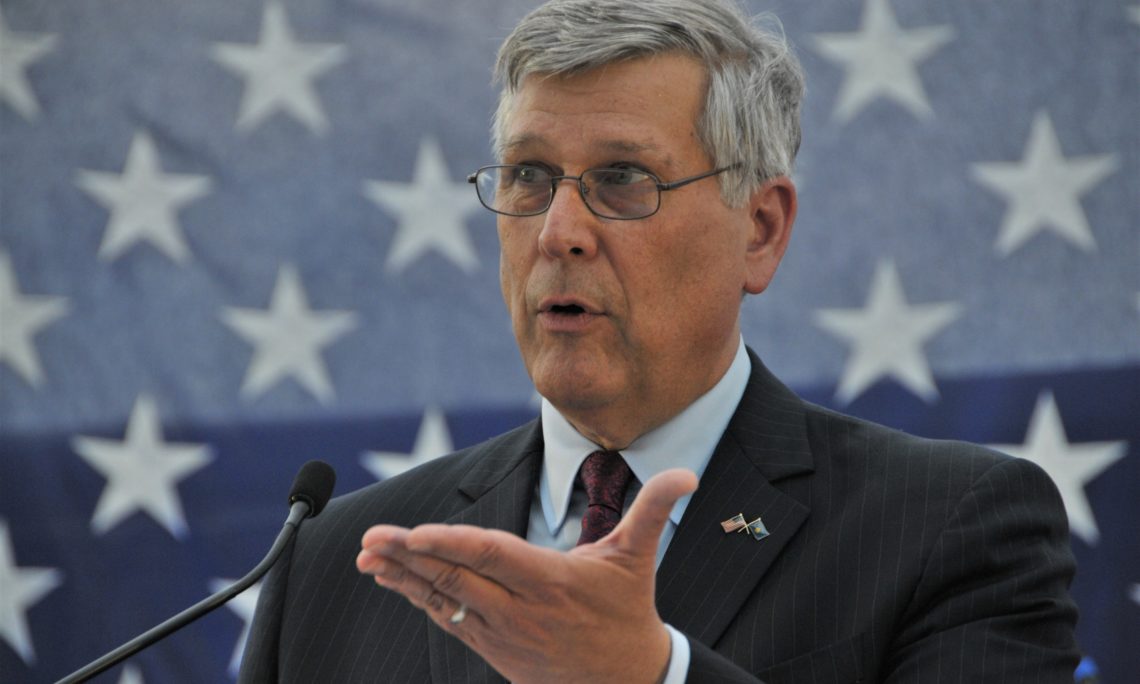 Ladies and gentlemen, good evening. On behalf of myself, my wife Alison Kosnett, and the American Embassy community, I am delighted to welcome you all to this celebration of the 243rd anniversary of America’s Independence. I can think of no better way to spend our birthday than with some of America’s closest friends, the people of the Republic of Kosovo.

It is an honor to be joined on stage by President Hashim Thaci and by one of Kosovo’s greatest supporters, Mr. Eliot Engel, Chairman of the House of Representatives Committee on Foreign Affairs. Here tonight as well is Mr. Tad Davis, Director of the State Department’s Bureau of Overseas Building Operations, who spoke on behalf of Secretary of State Pompeo earlier this evening when we dedicated this remarkable new Embassy.

This Embassy, designed and built by Americans and Kosovars working in concert, is more than just an office building. It is a symbol of America’s commitment to an enduring partnership with Kosovo. We also welcome members of the Kosovar-American community, who do so much to strengthen the bonds between our two countries. And our Kosovar guests include a thousand women and men active in many fields, representing all Kosovo’s communities, and reflecting the vitality and diversity of today’s Kosovo.

Since Alison and I arrived here last year, I have often been asked what has changed in Kosovo since my first assignment in Pristina fifteen years ago. How do I respond? By pointing to the rising generation of talented, energetic Kosovars who could succeed anywhere in the world, but have chosen to build a future here.

Entrepreneurs like Zorica and Isak Vorgucic, owners of Pivdzan Brewery, and tech pioneers like Mergim Cahani, the visionary leader of Gjirafa who started a revolution in local e-commerce. Defenders of justice like Bekim Blakaj, the executive director of Humanitarian Law Center Kosovo, a powerful advocate for victims of war crimes. Journalists like Tatjana Lazarević of KoSSev, standing up for truthful journalism in the face of intense pressure.

Advocates for women, like Elvira Dushku of the Kosovo Basketball Federation, whose work to involve more girls in sports has taught hundreds of girls teamwork and leadership skills. And artists like Leutrim Fishekqiu, who is bringing cutting-edge contemporary art to Kosovo and supporting youth through his exciting new festival, the Autostrada Biennale.

So this evening’s event is not only a celebration of America, but also of the ability and confidence of today’s Kosovo. In addition to American fast food favorites from Kosovar franchises, we will be serving organic, locally sourced food prepared by restaurants owned by two talented Kosovar women. The wines, craft beers, and juices are all produced in Kosovo, some by minority businesses. And the music comes courtesy of two terrific bands, String String and Gipsy Groove, reflecting the vibrancy of the local music scene. So let’s take a moment to thank the chefs and musicians, in addition to all the Embassy staff, contractors, and sponsors whose hard work and generosity have made this evening possible.

As Kosovo enters its second decade of independence, of course it faces challenges. As in any country, I hear Kosovars express concern about the future. But tonight I encourage you to take pride in the progress you have made – overcoming a legacy of conflict and privation to begin the hard work of building a new nation. Kosovo is not the first country to emerge from a turbulent birth. The first decade after America’s Declaration of Independence in 1776 – the act we celebrate tonight – was a perilous one. Our new nation was under threat. The 13 new states often disagreed with one another about the path forward. Only in our second decade, with the creation of our Constitution and a commitment to national unity, did America begin to find its way. And even today we continue the struggle to build what our founders called “a more perfect union.”

Citizens of Kosovo – Americans don’t stop striving for a better future, and neither should you. I have full faith in the ability of the leaders and citizens of this great country to continue to progress. To unleash the energy of your private sector. To fight corruption and strengthen rule of law. To build trust among communities. And to find a way back to the negotiating table with Serbia, to build a lasting peace.

Most of all, I have faith that you will not take for granted the democracy for which so many have struggled. To every citizen of Kosovo I say: your voice counts. Lift your voice high.

I will close with the words of a great American civil rights defender, Bryan Stevenson:

“You don’t change the world with the ideas in your head. You do it with the conviction in your heart.”