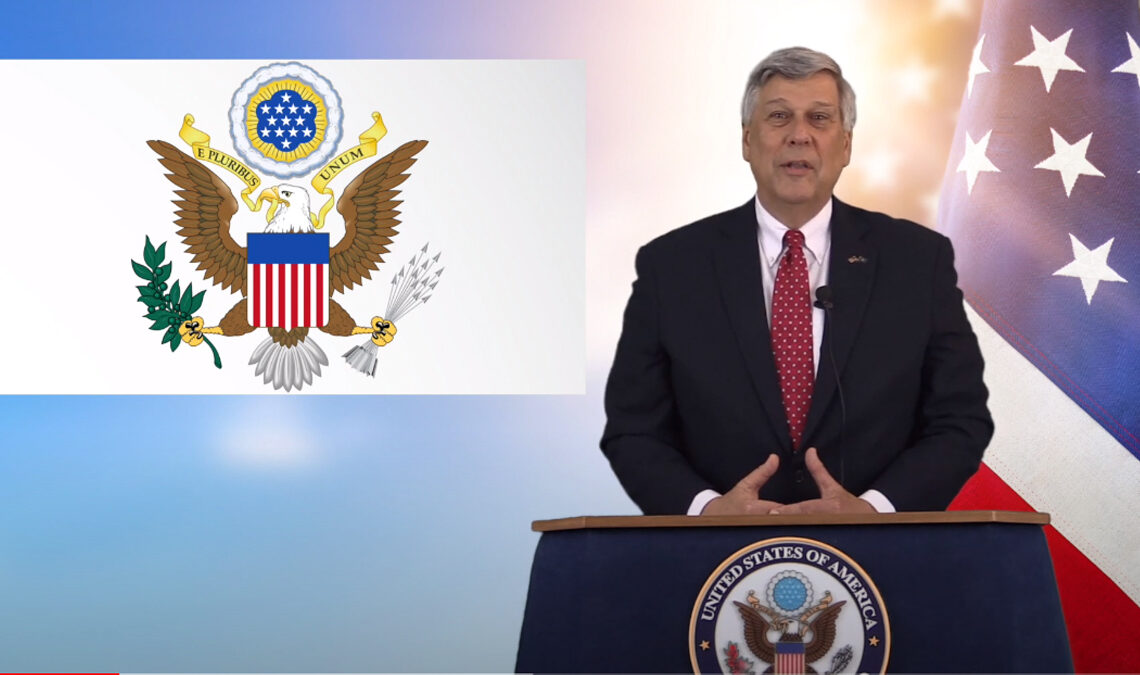 Hello. Thank you for joining us to celebrate America’s 245th Independence Day.

Our theme for this year’s Independence Day celebration is “E Pluribus Unum.” This is Latin for “out of many, one,” a traditional motto of the United States.  It can be found on many U.S. symbols, including on the scroll clenched in the eagle’s beak on our Great Seal.  This phrase originated with the idea the United States was created out of a union of Thirteen rebellious Colonies, and immigrants from six nations.

Over time, we have extended this concept – “Out of many, one” – to guide us as we seek to build a society with equality for all Americans, regardless of gender, race, religion, sexual origin, or country of origin.

Historians often refer to the journey that began in America in 1776 during our War of Independence as an “experiment” – and for good reason.  What our founders set out to do was bold, improbable, and untested.

They sought to build a new type of society, based upon a new type of democracy.  A society based upon a constant struggle for equality.  A union where fundamental individual rights are guaranteed – with “liberty and justice for all.”  A form of government in which the state answers to and is directed by the people, not the other way around.

This American experiment served as an inspiration to many countries that subsequently labored to build their own forms of democracy.  But the young country’s success was not assured.  Even our founders were uncertain of its fate.

We tell a story of how in 1787, at the completion of the Convention that produced America’s enduring Constitution, the scholar and diplomat Benjamin Franklin was stopped by a woman who had played a pivotal role in America’s fight for independence – Elizabeth Willing Powel.  Powel asked Franklin what he and other representatives had produced.  He reportedly replied: “A republic, madam, if you can keep it.”

Our republic has endured, but only because generations of Americans have struggled to keep our democracy from slipping from our grasp.  In the corridors of power in Washington and in small town meetings from Maine to Hawaii, in passionate political debate, in peaceful marches and on bloody battlefields, Americans have dedicated themselves to defend and maintain and extend the rights of the individual.

Nearly a century had passed since our Declaration of Independence when President Abraham Lincoln declared in 1863, “ Now we are engaged in a great civil war… we here highly resolve that these dead shall not have died in vain — that this nation, under God, shall have a new birth of freedom — and that government of the people, by the people, for the people, shall not perish from the earth.”

Americans cherish our democracy and the memory of those who gave their lives – their last measure of devotion – in the cause of freedom.  But we are not so naive as to think that the struggle for democracy is a subject only for history books.  Our experiment continues to be continuously tested.

Just this past January, our democracy faced one of the greatest threats since the Civil War, as fellow Americans inspired by lies sought to overturn a free election in a violent assault on the U.S. Capitol.  And in the aftermath of the brutal and unconscionable deaths of George Floyd, Breonna Taylor, and other African-Americans, millions of Americans of all backgrounds chose not to turn away from the disturbing reality that the dream of equal treatment and equal justice for Americans of color remains elusive.  And until all of us are free, none of us truly are.

And the American experiment perseveres.  As President Biden has said, the United States has always been forward looking.  When challenged, we come together as one: one nation, one people, endeavoring together to build a more perfect, a more just, a more equal society.

Out of many, one.  Like the U.S., Kosovo is a multi-ethnic and diverse society.  And we can both benefit from the rewards of diversity – especially when we move beyond a grudging tolerance for fellow citizens from different backgrounds, to actively embrace the richness that people of varied ethnicities, religions, customs, and ideas bring.

Out of many, one.  One United States.  One Kosovo.

Today we will hear how our partners from different communities  throughout Kosovo use U.S. investments to build a better future.  Today, in this virtual July 4th presentation, you’ll hear from our partners about some of the successes our cooperation has achieved over the past year.

Our assistance – whether in the form of development aid, educational grants, our programs to help professionalize the justice sector and the security forces, or emergency assistance like vaccines—is not meant to last forever, year after year.  Rather, we seek to empower individual citizens, government institutions and local civil society organizations along the path to self-sufficiency, so that Kosovo attains its place as an equal partner in the region, within Europe, and on the global stage.

You’ll hear from alumni of our flagship exchange programs, entrepreneurs who have benefited from USAID assistance, and members of the first Kosovo Security Force joint deployment to Kuwait.  All of them are putting U.S. assistance to the best possible use for Kosovo and Kosovans.

You’ll also hear from Peace Corps volunteers, Fulbright scholars, and other Americans about the connections they forged with Kosovans, despite cultural and other differences.

In the coming weeks, we’ll be asking social media fans – that means YOU – to contribute to these stories by sharing your experiences, your perspectives, about what makes Americans American and Kosovans Kosovan – the small, sometimes humorous differences and the indisputably strong bonds that tie our two peoples together.

From many, one.  One Kosovo for all Kosovans.  One United States for all Americans, no matter any differences.  Both our countries must continue the struggle to ensure equality for all citizens.  This common struggle, this shared experiment, is what binds us together. We cannot relent – building resilient democracies takes work.