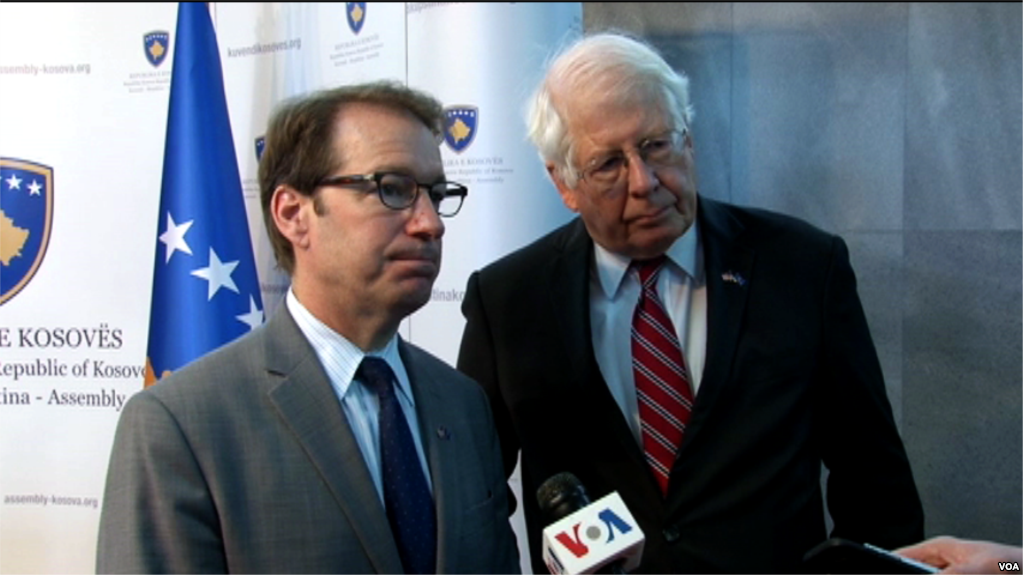 Interview of Congressman Roskam and Congressman Price with Voice of America, February 19, 2017

Interviewer: Congressman, Just two days ago or so marked the ninth year of independence. How do you evaluate the current situation in Kosovo?

Congressman Roskam: There is a brightness to the current situation in Kosovo. If you think about the journey that Kosovo has been on, celebrating nine years of independence in a remarkably stable environment. The economy is growing and this is a country just filled with possibilities. So, it is not without its challenges and that is one of the reasons that we’re here. This is our first stop of any congressional delegation. Kosovo is the first that we’ve come to. Why? Because we realize how important and how vital Kosovo is and the work of the people of Kosovo to bind their country together and to move forward for a stable and prosperous future.

Interviewer: Is this a sign that the position of the United States remains unchanged towards Kosovo?

Congressman Price: Absolutely. I feel very confident of that. We have had a bipartisan policy with respect to the Balkans and Kosovo from the beginning of the breakup of Yugoslavia. And in fact, our House Democracy Partnership is a parliament to parliament body that is visiting here today. We visited Kosovo before independence. We were working in Macedonia next door, so we have seen this from the beginning. We have had a partnership ever since independence. And we’ve had very cordial relationships with all sides in Kosovo. One of our hallmarks is urging inclusion, encouraging broad representation of the entire country and so we’re encouraged by that prospect. We know that at the moment there are some very serious difficulties with respect to the participation of all elements, with stubborn issues. We have difficult issues ourselves. We share that. Nobody claims perfection in the business of representative government. We are all striving to make it better and we feel this partnership has been very fruitful.

Interviewer: Because we are facing something chilling just right now, internal and external also, there is stalled dialogue between Serbia and Kosovo. There are not enough results as we expected. Having in mind the current situation in the region and also the tension between the two countries, is optimism optimal enough to expect some results anyway?

Congressman Roskam: the expectation is that people be constant and people be faithful, do not slow down and don’t give up. Because the alternative is miserable. So there are rising voices of authoritarianism around the world that are basically telling democracies “You’re yesterday. You don’t matter. You can’t govern. You can’t come up with solutions.” And I think those of us around the world that value freedom, that value the voice of everyone to participate, we recognize how incredibly important this time is. And look, if Kosovo has come through the difficult and tumultuous past that it has, and it has done that, then by definition it has the capacity as a people to rise up and deal with all the challenges that are before it. So we’re not here being dismissive at all about the nature of the challenges. But what we’re here saying is that this is a region that is worth standing for and Kosovo is right in the center of it. And basically, the future of this region depends on stability here. And if people, to go to Mr. Price’s point, if people are able to come together and realize that the assembly is place, for example, where their grievances and their aspirations are given voice. Everyone doesn’t get everything they want. That’s life. No perfection this side of heaven. But that known, we know that there is great stability that comes from institutions like this.

Congressman Price: And we know that Serbia itself is facing some incredible decisions going forward. Serbia is striving for EU membership, striving in other ways to join the family of democracies in a full-fledged fashion. And we take encouragement from that. It is true also that Serbia and Kosovo have a very fraught history, a very difficult history. So part of the ultimate arrangement is going to have to be a free and flourishing Kosovo. And of course that assumes that the Serbian minority within Kosovo has full rights and full participation. There is a solution here to be found and it is not surprising I suppose that it is difficult to get there. But we feel optimistic and we certainly feel sure of our own country’s support.

Interviewer: Having in mind many changes in the world, many observers would say that Balkan and western Balkan especially is struggling for democracy and rule of law and is under Russian pressure and there is a risk of radicalism. It needs more attention by the US administration, do you agree?

Congressman Roskam: I think there are a lot of places around the world that need the attention obviously, the attention of the US administration but not just the attention of the US administration. The whole world needs to recognize its opportunity in various regions of the world, particularly those of us who value democracy and value democracy development and recognize that it’s the pathway for ultimate stability and ultimate prosperity. I take your point that the Balkans has been a historically complicated slice of sunshine and we need to be mindful of that. But I think that there is attention on the part of the United States to realize the United States’ own history here, not just within the past several decades but with the past century of involvement, particularly in the Balkans.

Interviewer: Are you aware, are you concerned, about the Russian interference in the Balkans.

Congressman Price: Yes. The short answer is yes. I think the Russian influence in this part of the world and increasingly word wide is a source of great concern. Our own view is that Russia has no reason to feel threatened by a free and independent and democratic Kosovo, and for that matter, Serbia taking its own path toward being part of Europe, toward being part of full economic and political integration. That’s in the interest of both countries. And Russia has no reason to feel threatened by that. They tend to want to dominate countries in their orbit and to interfere in elections and do other things that are inappropriate.  So our country, the whole western alliance needs to be very vigilant about that. We are convinced, we are quite confident that Kosovo is aware of the dangers and will stand firm and will declare and independent course and we are determined to back them up in that.

Interviewer: Congressmen, finally, is a bit of a selfish question. Voice of America boasts 75 years on air. How do you see this time and its role in the future?

Congressman Roskam: I think Voice of America is incredibly important. It is well regarded around the world. People know when they tune in, when they watch, when they see, they’re going to see what’s really happening. We see other voices of just unmitigated propaganda around the world. And you look at it and it is very easy to dismiss it. It is insidious. It is dismissive of the truth. It makes false claims. Voice of America enjoys a reputation of being forthright and direct, telling the whole story. And we think the whole story is worth telling.

Congressman Price. I agree heartily. We’ve worked with the Voice of America for years. Our House Democracy Partnership is involved in developing democracies all over the world. In south Asia, in Africa, in of course Eastern and Central Europe. Many spots where the people put a premium on accurate information, a kind of unvarnished look at the news, at political accounts of political developments. That’s been the Voice of America’s trademark. And I think it is a tremendous service that you render to the cause of democracy and full and free information all over the world.

Congressman Roskam and Price: Thank you.