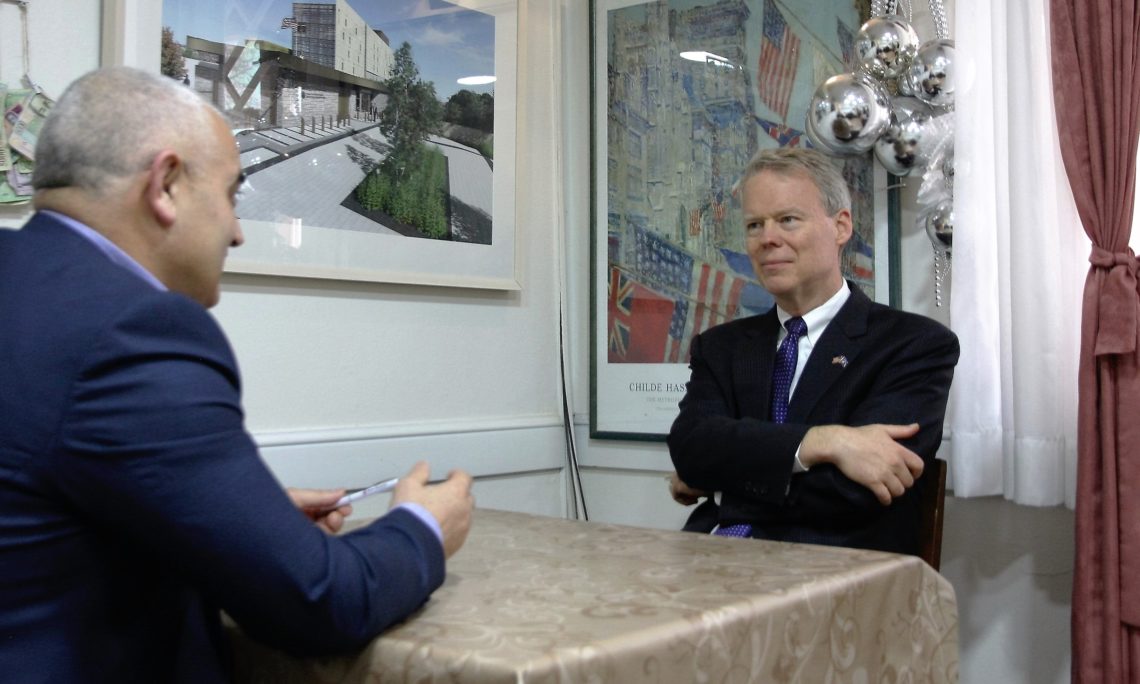 Well, first of all I have to say I was outraged by the effort on Friday to abrogate the Law on the Special Court.  The United States does not support this or any other effort to undermine cooperation with the Court, which is vital to bring justice to the victims of war crimes and to show Kosovo’s readiness to become a full member of the international community.

This process was led by a few individuals.  It was clearly undertaken in secrecy to avoid the scrutiny of Kosovo’s public and its friends in the international community.  I am extremely disappointed at those who would sacrifice their country’s future to promote their personal interests.

We will view those behind this initiative as complicit in any further attempt to abrogate or change the law, or to undermine Kosovo’s commitment to the Court in any way.

Any such efforts would have specific and profound consequences for Kosovo’s European future, and for its relationship with the United States.

Like many people in Kosovo, I’ll be spending the end of year holidays with my family. As I reflect on the past year for Kosovo, and look forward to the tenth anniversary of independence coming soon in 2018, I can’t help but be amazed at how far Kosovo has come.

My hope is that as Kosovo’s officials return refreshed in the New Year, they will take up work as soon as possible to address some of Kosovo’s most serious issues, like passing the Border Demarcation Agreement, fighting corruption, passing the Law on Religious Freedom, and enacting policies that will grow Kosovo’s economy.

Kosovo conducted three sets of professional, fair and credible elections this year, with only minor irregularities. This is a great accomplishment and I’d like to congratulate not just those who worked on these elections, but everyone who has been steadily contributing to Kosovo’s democratization since the first set of elections years ago. There are no other ten-year-old countries whose elections performance is as strong.

I will point out though, in Serb Majority Municipalities, there were credible instances of intimidation and violence in the lead-up to elections, which affected candidate willingness to stay in races. Foreign interference was undeniable, and had a negative impact on the democratic rights of the citizens living in these areas. These citizens deserved competitive elections like everyone else in Kosovo; nearly 30 years after the fall of the Berlin Wall, we should not be seeing single-candidate elections in Kosovo. The EU Observation Mission did a good job of documenting these problems.

My role in Kosovo is not to grade the performance of governments. I can say I’ve seen some positive energy lately from the government. The government has set a tone for inclusiveness, which I welcome — from successful implementation of judicial integration in October, to greater minority engagement in meetings, to taking steps to consult and engage with Kosovo Serb communities about security force transformation.

It is important for the government to work on the European reform agenda, which is integral to Kosovo’s Euro-Atlantic future. Kosovo must demonstrate to international allies that it can get things done — including tough decisions — that are positive for Kosovo’s citizens and move the country forward. Border demarcation is a primary example.

This project will provide energy security, the lack of which has been a huge obstacle for economic growth. In addition, as anyone can see from the Air Quality Monitor on our Embassy website, there have been many days when the air has been hazardous to breathe because of pollution. Kosova e Re will be built to the highest European air quality standards, and will be a great improvement environmentally from the existing Kosovo A.

MPs should ratify the Border Demarcation Agreement that was signed in 2015. It is the right deal, which has been verified by the U.S. Government and other international experts; Kosovo loses no land under this Agreement. This issue has held Kosovo hostage for over two years now; many people have used it for their own political ends. This damages Kosovo’s international credibility, and negatively impacts citizens. It is past time for the government’s attention to turn to other issues like corruption and economic development. I hope in 2018 we will see the BDA passed quickly.

The EU has been very clear that visa liberalization is dependent on passing of the Border Demarcation Agreement. The most serious and immediate consequence of not passing it is continued isolation for Kosovo’s citizens and lack of visa-free travel to the European Union. Additionally, I think it does not send a good signal to Kosovo’s allies and partners that the government cannot finalize such a simple and straightforward international agreement, after over two years of debate about it. Responsible states have to make difficult decisions, find ways to compromise, and then implement them. Kosovo should ratify the existing agreement as soon as possible, and move on to other issues.

As the U.S. Ambassador, it is not my job to set policies for the EU or to agree or disagree with them. I am here to address U.S. polices in Kosovo.

What I can say, though, is that if you want to join a club, you have to follow the club’s rules. You are misplacing your energy and losing time by arguing about the rules rather than fulfilling the requirements and gaining membership.

Kosovo’s government has an ambitious legislative agenda that will help fight corruption.

Reforms from the Ministry of Justice are moving forward, but they will need cross-party support in parliament. Passing the Law on Disciplinary Counsel, for instance, will be vital. This will be a critical step forward in strengthening checks, balances, and accountability in Kosovo’s justice system. Reforming the Criminal Code is another vital priority for the near future.

Public procurement reform is another vital step in tackling corruption. Corruption in this area has far-reaching consequences, undermining economic investment, local service delivery, access to health care, and education. We would like to see the government fully implement e-procurement by the end of January 2018.

Measures like e-procurement make it harder for officials to act in a corrupt way; legal changes will make it easier for rule of law institutions to deal with corruption when it happens. Dealing effectively with this issue will require both types of measures.

A concerning issue is “fake news” or other methods of manipulating information so citizens cannot trust what they read. That is something being dealt with all over the world, not just in Kosovo. Creating fake news is irresponsible and damages democracy. But as long as fake news exists, I encourage all of us to be careful readers, to ask about the motivation behind the things that we read, and if we have questions, to look for reputable news sources, rather than easy clicks on the Internet.

As a sovereign state, Kosovo has the right to an army; the U.S. government supports this right. But it has to do this legally, in a manner that takes into account the concerns of all citizens of Kosovo. No one entity has a veto over the transformation of the Kosovo Security Force, and a constitutional amendment is the path most likely to ensure that all Kosovo’s citizens have a stake in the process. I commend the government for the steps taken to better explain what the transformation of the KSF means for every community in Kosovo. I hope that continues in 2018. We are supporting Kosovo in that process now, and will continue to do so.

To end, I want to congratulate the people of Kosovo on their extraordinary achievements over the past ten years. There is a long road ahead, but I am convinced that Kosovo’s people have the commitment and tenacity to succeed in all of their European ambitions.