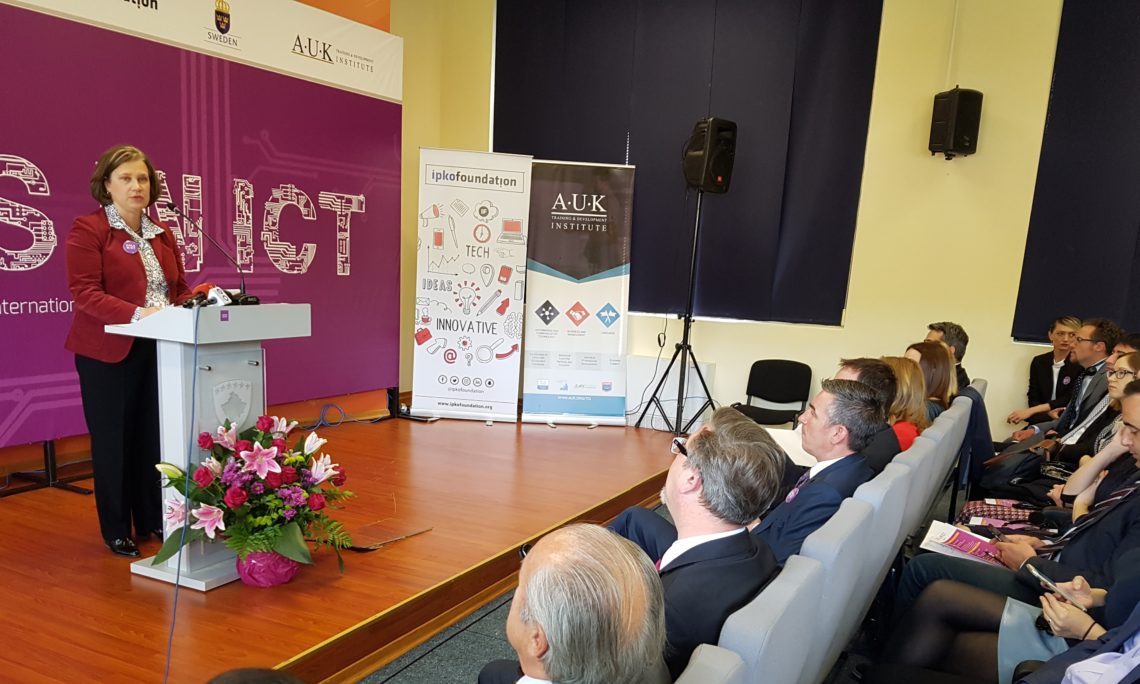 Good morning. It’s really a privilege to be here and address a topic I care so deeply about.

Today Kosovo joins countries around the world in encouraging the inclusion of women and girls in ICT studies and career fields. This is a timely and urgent issue in the U.S., just like here in Kosovo.

We know that, all too often girls are steered away from math and engineering and the so-called hard sciences, not because they lack the aptitude or the desire, but simply due to their gender.

It may not always be a deliberate act of discrimination, but in the end, the effect is just the same. Not just in preventing girls from entering into these fields, but in sending them the message that some things are simply off limits.  It shrinks their universe of opportunities during a time in their lives when imagination and aspiration should be limitless.

This dampens the confidence needed for exploration and the courage to take a risk and try something unfamiliar, even something you might get wrong.

And so today is in part about showing girls all across Kosovo and around the world that every path is open to them, that nothing is beyond their reach.

A couple weeks ago, several of my colleagues visited the extraordinary Bonevet maker-space in Gjakova. And Vllaznim, I hope you don’t mind me quoting you!

You told my colleagues: “the end goal isn’t to produce more engineers…the true objective is to help those kids discover their own abilities.”

That’s a really powerful notion, because kids pick up so easily on the signals we send them about what we believe that they’re capable of. It’s so important that we not only create opportunities for girls to see what they can do, but that we insist upon it.

This year for the very first time, Kosovois sending two representatives to the U.S. for the Fortune-State Department’s Global Women’s Mentorship Program.  Two truly impressive women, one of whom, Hana Qerimi, is the co-founder of the Digital School in Kosovo.  And of course her co-founder Darsej Riza is here today as well.

When Hana and Darsej started the school, they of course made it available to both boys and girls…buttoo often the girls didn’t come – because their parents didn’t send them.

Hana told us they had to lobby and persuade.  They made including girls a fundamental part of the school’s In short, they insisted.

She’s a true role model for what women can accomplish in ICT careers, and for how they can mentor and encourage others.

At the Embassy and USAID, we’re committed to being full partners in this effort as well. We’ve joined forces with local ICT companies to expand their operations, and we’re fostering the sustainability of ICT companies to recruit, train, and promote women.

Because there are economic implications as well: projections around the world show a continuing shortfall of qualified ICT workers. In a country with high youth unemployment and with women underrepresented in the workforce, it would be madness not to capitalize on the demand for skilled ICT labor.

There’s so much more to be done. And it’ll take more than policy initiatives to get there.

It’s about parents and teachers and school directors ensuring that all kids have the opportunity to study whatever they choose.

It’s about men and women in ICT fields giving their time to be mentors and advocates, and sharing their own experiences – even their setbacks – with girls taking their first steps down this path.

And critically, it’s about all of us making sure our kids know that it’s good a good thing to push themselves, to be problem solvers, and to even fail at times while taking worthwhile risks. That failure is a teacher and an opportunity, and no reason to be ashamed.

I was talking to a colleague of mine who works in our Embassy’s IT section about her experiences in the State Department and as a math teacher before that. She said: the hardest thing is often just being the only woman in the room, knowing that your abilities will be questioned just because of your gender.

We’ve all got to do better than that, and I’m so pleased to see Kosovo recognize this issue as a priority as well.

So let’s keep working together to ensure that all paths are open to Kosovo’s daughters, and that every girl in Kosovo benefits from the entire universe of possibilities.