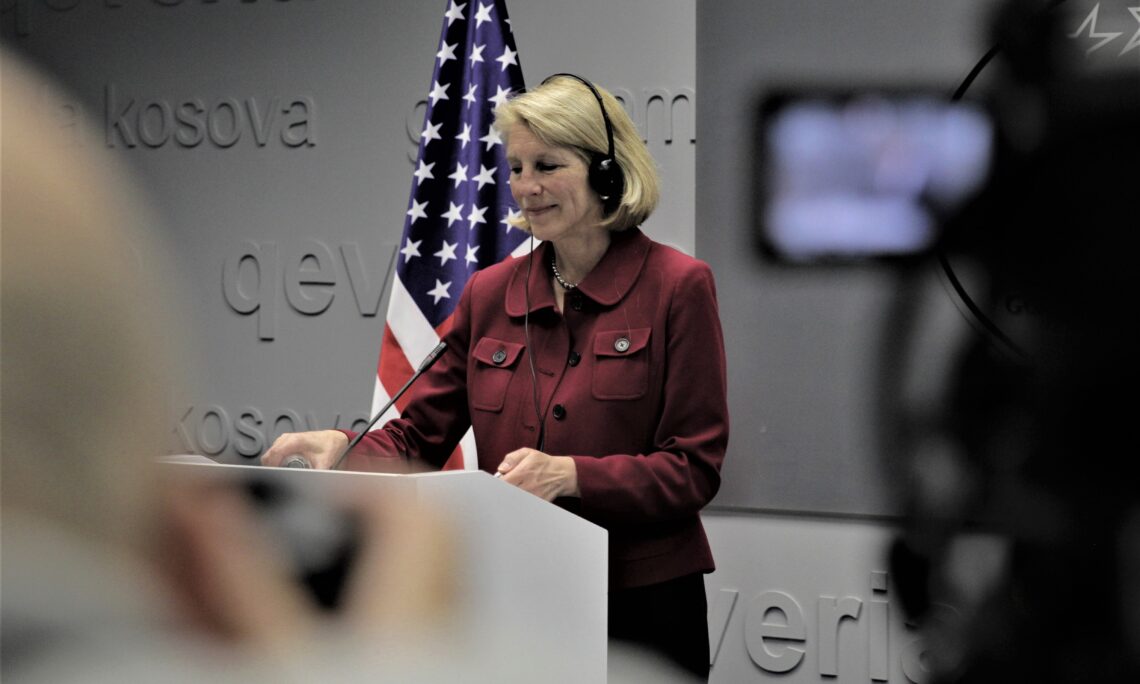 Good evening everyone thank you Mr. Prime Minister.  It’s such a pleasure to be here in Pristina, on my first trip to Kosovo as Assistant Secretary.  The Prime Minister and I have only had the opportunity to speak by phone so it’s a particular pleasure to meet in person on such a stunning day.  When I landed at the airport I had a spectacular view of your beautiful country.

I’m here at a challenging time for Europe and the Western Balkans in particular.  Russia’s brutal, unprovoked war against Ukraine is a wakeup call for many.  Despite all the hard-earned progress the United States, Kosovo, and other democratic partners have made, we must never take peace or our democratic institutions for granted.  We must strive every day to deliver for our citizens.

The United States wants to see Kosovo take its place in European and Euro-Atlantic institutions.  That’s why we place such a high priority on supporting the EU-facilitated Dialogue to help Kosovo achieve normalized relations centered on mutual recognition with your neighbor Serbia.  The status quo is unsustainable; not only does it hinder Kosovo and Serbia’s European futures, but it benefits the Kremlin.  Russia wants to ruin any unity and democratic consolidation in Western Balkans’ countries, ensuring that you and your neighbors cannot, and do not, integrate into European and Euro-Atlantic institutions.  It believes that a stronger, more prosperous, democratically resilient Balkans region is a threat to its influence.  Better relations between Kosovo and Serbia threaten Russia’s ability to divide, breed fear, and foment chaos.

The best way to counteract the Kremlin’s flagrant attempts to destabilize the region is simple: Kosovo and Serbia must come together and urgently reengage in the EU-facilitated Dialogue, with robust U.S support.  The Prime Minister and I discussed next steps in the Dialogue and just how important this is for the United States.  Our goal is your goal: an agreement that normalizes relations centered on mutual recognition.  Urgent, creative, and flexible engagement and sincere good-faith efforts by both Kosovo and Serbia will lead to lasting benefits for all citizens, including economic growth and long-term stability.  I am aware of concerns within the Government and people of Kosovo for Kosovo’s security at this unsettling time.  I assure you that the United States’ commitment, and that of our Allies and partners, remains iron clad.  Kosovo hosts NATO’s largest deployment – KFOR – with a mission to maintain peace and stability.

The Prime Minister and I also discussed his government’s leadership over the past year, especially on humanitarian issues. The United States is deeply appreciative of Kosovo’s willingness to temporarily host Afghans at Camp Bondsteel.  Thanks to your tremendous hospitality and generosity, nearly 600 Afghans – families, men, women, and children – have traveled through Kosovo to begin new lives in the United States.  These families will undoubtedly always now consider Kosovo as their second home.

I also want to thank Prime Minister Kurti for his leadership on Ukraine – for your Government’s solidarity in enacting sanctions against Russia and for offering humanitarian support and refuge, like you did for Afghans, now to Ukrainian refugees and journalists.

Finally, I want to thank Prime Minister Kurti for traveling to the United States early tomorrow to honor former Secretary of State Madeline Albright at her funeral.  As you know, Secretary Albright was deeply committed to Kosovo and its European future.  I assure you that while the United States and our allies and partners are focused on holding the Kremlin accountable for its brutal war   and its impacts beyond Ukraine, our commitment to Kosovo and the Western Balkans has never wavered.  In fact, it has never been stronger.