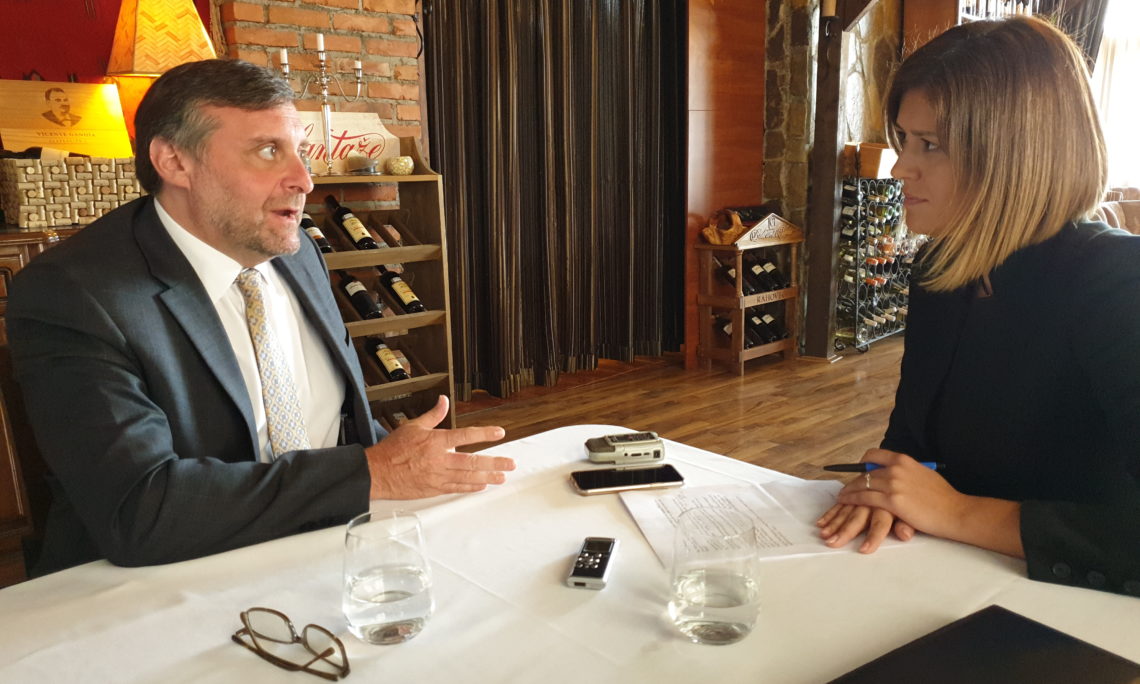 RFE: Mr. Palmer, thank you for your time.

DAS Palmer: Thank you for having me today.

RFE: You just came to Kosovo from Serbia where you met some officials over there, the heads.

DAS Palmer: Yes, I have.

RFE: And, now you’re in Pristina. Did you succeed in convincing the two sides to go back to the dialogue?

DAS Palmer: Well, we continue to support the EU-led dialogue. We think it’s fundamental to the future of both countries, for both Serbia and Kosovo to find a way to normalize this relationship. Ideally, that would mean mutual recognition and the opening of a path forward to European integration for both Kosovo and Serbia. Getting back to the table is fundamental to this. That’s going to require the suspension of tariffs or removal of the obstacles to progress. I believe that both parties are ready to reengage, but it’s important that the conditions are put in place that makes this possible. So, we remain supportive of this process. There is no other path forward for Kosovo, other than dialogue with Serbia, normalization of that relationship, and we’re hopeful that this can move forward as quickly as possible.

RFE: And the United States view is the removal of tariffs, absolutely, the condition for the continuation of the dialogue?

DAS Palmer: At this point we don’t see another path forward. Whether that’s fair or not is a different question, but the tariffs are an obstacle to progress, they’re not benefiting Kosovo in any way. The tariffs are, in fact, as we would look at it, fundamentally damaging to Kosovo’s strategic interest in normalization and a European future. So, we would encourage the authorities in Pristina to, at a minimum, suspend the tariffs, allow this process to restart, see if progress can be made, if there can be traction, if there can be forward movement, and then do everything that we can to move the process forward towards an agreement as quickly as possible.

RFE: Do you see readiness in Kosovo society to suspend the tariffs?

DAS Palmer: Well, I mean, that’s a decision for Kosovo to make, on the basis of its collective understanding of Kosovo’s best interest. We understand that the tariffs are very popular, and we understand why, but we would encourage people, both political leaders and voters in Kosovo to take a good, hard look at these tariffs – what, in fact, Kosovo is getting out of that, and what, in fact, it’s costing Kosovo. And if this is viewed in a clear-eyed fashion, I think that they will share our conclusions – that the tariffs are fundamentally not helping Kosovo move forward in the way in which it needs to move forward.

RFE: There seems to be a deadlock in this process between Kosovo and Serbia, in Serbia and Kosovo on dialogue. How do you see the future? Could shuttle diplomacy be something that can be used to get the two sides back to the table?

DAS Palmer: Well, I was just in Belgrade, now I am in Pristina.

RFE: Is this part of the shuttle diplomacy?

DAS Palmer: It’s the sense that we maintain ongoing conversations with both sides about this process and about the path forward. Ultimately, though, it’s not up to us to negotiate an agreement. Pristina will not negotiate an agreement with the United States, it won’t negotiate a deal with Brussels – it needs to negotiate with Belgrade. So, it needs to find a path forward back to the dialogue table, back to the negotiating table, and reach a deal that advances Kosovo’s national interest.

RFE: Is Pristina asking the United States to take part, maybe, more, to get more involved in this process, or maybe, in shuttle diplomacy?

DAS Palmer: Well, at this point there is no process for the United States to engage in, or support in a material fashion. We need to find a path forward to a relaunch the dialogue. The United States is committed to supporting that process, we have been involved and engaged from the beginning. We’re prepared to do more in support of this process, but we need to find a way to get the parties back to the table talking about the fundamental issues.

RFE: U.S., however, is not as tough as it used to be at the beginning, when the tariffs were introduced, when you canceled a few visits to Kosovo, when Haradinaj missed the National Prayer Morning in D.C. because of the visa issue. Did anything change in the meantime?

DAS Palmer: People, I think, read too much into smaller developments, but fundamentally the United States supports Kosovo. Kosovo is a partner for us and we’re a strategic partner for Kosovo. That said, there ae limits to what the United States would be able to do to help Kosovo if Kosovo won’t help itself. So, in terms of the dialogue with Serbia, the natural consequences of a breakdown in the dialogue process would manifest themselves without the United States having to be firm or tough in any particular way. Kosovo won’t be able to move forward, and as I said in my public remarks yesterday, if Kosovo doesn’t move forward, it will slide backwards. So, Kosovo needs to help itself, and it needs to help itself by doing what is necessary to get this process back engaged, and back moving forward.

RFE: Do you think Belgrade is using tariffs as an excuse to block the dialogue?

DAS Palmer: I don’t know that talking about it is an excuse or not, is helpful. One of the things we try and do is to understand the political realities on both sides – whether it’s fair or not, whether it’s right or not, the tariffs are an obstacle to progress. Progress is fundamental to Kosovo’s interest. The tariffs are preventing that from happening. Once the tariffs are suspended or removed there is still a huge, open field of issues that need to be negotiated between Belgrade and Pristina. So, it’s not a fix for the process, it doesn’t solve everything, but it allows the parties to get back to the table and re-engage and work through these issues together, with the support of the European Union, the facilitation of the European Union, and the strong engagement and  support by the United States.

RFE: Moving to the final agreement, the White House on the 20th anniversary of Kumanovo Agreement sent a message to both sides to work on reaching an agreement which would focus on mutual recognition.  Under the circumstances, do you think it is possible, what is the mood like in Serbia, is Serbia ready to recognize Kosovo’s independence?

DAS Palmer: I think there is a deal to be had between Pristina and Belgrade.  I think it is entirely possible if the parties sit down at the table and negotiate with good will, that they can find a path forward to an agreement that benefits both countries. I can’t tell you what that agreement is, I can’t tell you what the elements of it are, for the United States ideally, we would love to see mutual recognition as the basis for an agreement, one that sets both countries firmly on a European path.  To get there requires negotiation.

RFE: President Trump in his letters to Kosovo’s and Serbia’s presidents, said that US is ready to assist in reaching an agreement that balances the interests of both, Kosovo and Serbia. Are there red lines for the United States when it comes to the final agreement between Kosovo and Serbia?

DAS Palmer: The United States isn’t prepared to simply rubber stamp any agreement between Belgrade and Pristina. What we have been saying is that we want to see an agreement that is durable, that is locally owned, fair, that’s just, that’s implementable, one that can be explained and embraced by the publics on both sides. If we have concerns about the particulars of any agreement, we would identify those concerns and we’d work with the parties to address and resolve any concerns that the United States might have, but as I’ve said, you know we’d love to have that problem because it would mean that the parties would have relaunched a negotiating process and found commonality, so that’s what we would like to see.

RFE: If the final agreement has to do with border adjustments, division, correction, “razgranicenje”, however they call it, will the United States support such an agreement?

DAS Palmer: Determining borders is a sovereign right, that’s something that Kosovo controls and determines. If Kosovo chooses as a matter of sovereign right to discuss border adjustments with Serbia, that’s Kosovo’s choice. We support a negotiated process between Belgrade and Pristina that is working towards the full normalization of the relationship, that means that any agreement is going to be multidimensional. There’s going to be a political component to it, there’s going to be a security component to it, there is no doubt about a cultural component and an economic and trade component, this isn’t a question of any binary simple trade. Whether or not that also includes discussion of the demarcation of the border between Kosovo and Serbia, it is for the parties themselves to decide and agree. What the United States wants, is a process that is supported and supportable by both sides, by both parties.

DAS Palmer: We support any effort on the part of our European partners aimed at moving this process forward. Our understanding of the meetings in Berlin and Paris are that these are designed to support the overall EU facilitated dialogue and the normalization of the relationship, that they are looking to create conditions that will allow the process to restart and relaunch. If that’s a mechanism that can help the parties get to an agreement, get to yes, to something that has the United States’ full confidence and support, so we work well and closely with our partners, not only the EU as an institution, but individual member states including Germany and France, we’re hopeful that this process can make a real contribution and we will support it as such.

RFE: Can it replace the Brussels dialogue?

DAS Palmer: I don’t think that’s the intention of this process at all, that’s not what I believe Berlin and Paris are looking towards, rather what they are doing is in support of the Brussels process.

RFE: Thank you for your time.