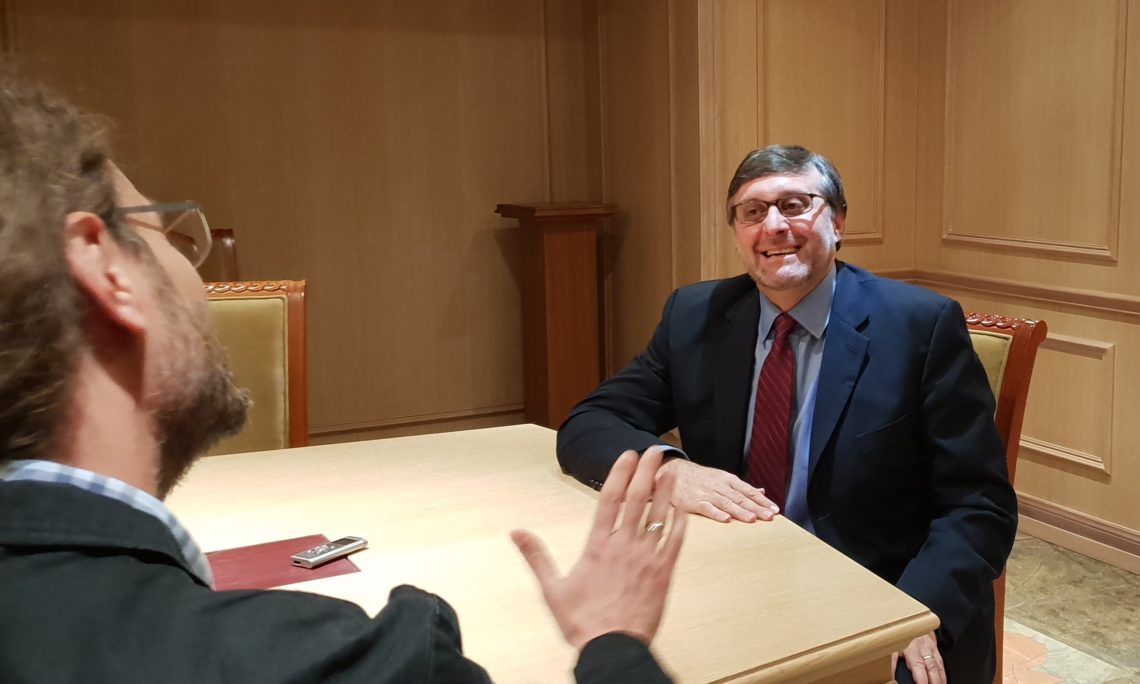 Goran Avramovic: Has, in your opinion, the U.S. policy toward the Western Balkans changed after you assumed the position of acting Deputy Assistant Secretary?

Avramovic: The main political topic of this season was and still is, obviously, a possibility of territorial exchange or border correction between Serbia and Kosovo. Under which circumstances U.S. can consider this kind of territorial agreement as acceptable solution?

DAS Palmer: Our goal is to support the full normalization of the relationship between Belgrade and Pristina.  Any such agreement would need to be comprehensive and it would involve political, security, economic, trade, cultural questions.  We feel that an agreement needs to be locally-owned, it needs to be durable, it needs to be sellable to both sides and so what we’ve been doing is encouraging the parties to work together through the EU-facilitated dialogue to define full normalization and engineer a process to get to that state.

Avramovic: Many people are worried that if there is any kind of territorial agreement that this might destabilize Kosovo and its multi-ethnic policy, but also some other Western Balkan countries in many aspects. Do you share this point of view?

DAS Palmer: If an agreement on full normalization between Belgrade and Kosovo were also to include an agreement on border delimitation or an adjustment to the borders between Serbia and Kosovo,that would be an agreement by mutual consent between two independent, sovereign nations. Different than the dynamics from within a particular single nation state—I  think, not a precedent for other situations in the Balkans. I understand the concerns on the part of those who have articulated the risks that this would present as a precedent. There’s risks on the other side. There’s risks on the part of failure to reach agreement between Belgrade and Pristina on normalization, risks of a long-term, frozen conflict in the region that would undermine peace and stability and prosperity for all. So, I think it’s a question of balancing risks and finding a way to mitigate those risks if indeed that is part of a broader package on normalization.

Avramovic: You personally have stressed a few times that a continuation of the Brussels Dialogue and the implementation of the agreements was of key importance. So what is your stance when we speak about the association/community of Serbian municipalities?

Avramovic: You have said also that USA and Russia have very different ambitions in the Balkans and expressed some concerns about Russians work against the agreement between Belgrade and Pristina. Do you see proof of that in practice?

DAS Palmer:  I think what we’ve seen consistently is that the United States is supportive of a European future for the region. Integration into European and Euro-Atlantic institutions to support a system in the Western Balkans that is based on trust, that’s based on rule of law, that’s based on norms and values. Russia has been working consistently across the region to undermine the efforts of the Balkan countries to move forward towards a European future. You see that most clearly in Russian support for the attempted coup in Montenegro in 2016. You see it in very overt Russian opposition to the Prespa Agreement in Macedonia. And I think you can see on social media and in Russian-language media in the Balkans efforts to undermine the progress towards the full normalization of the relationship between Belgrade and Pristina.

So the United States and Russia have, I would argue, very different visions for the future of this region. And I think it’s pretty clear that the U.S. vision for this region is significantly more consistent with the ambitions that the countries of the Western Balkans have for themselves.

Avramovic:  And how do you see UN Security Council Resolution 1244 and UNMIK role in Kosovo these days? In her resignation letter to the UN Secretary General, the outgoing U.S. Ambassador to the UN, Nikki Haley, urged the UN to withdraw its mission from Kosovo saying it had long ago fulfilled its mandate.

DAS Palmer:  Well, I think Ambassador Haley’s letter is entirely consistent with the position the United States has staked out and held for some time. UNMIK at one point did have a role in Kosovo—did have a significant role—that time has passed. UNMIK as an institution, UNMIK as a mission has fulfilled that which we asked of it. There is no value in maintaining institutions that have fulfilled their mission or outlived their appropriate time.  So we think it’s time to move on from UNMIK. We think the focus should be, now, on supporting and encouraging the full normalization of the Belgrade-Pristina relationship and allow these two countries to move forward as neighbors.

Avramovic: May I follow up on this one? Is that possible without a new UN Security Council Resolution?

DAS Palmer:  Is it possible for Belgrade and Pristina to reach an agreement? Yes, it is. Will there be value at some point in this process in a UN Security Council Resolution that affirms that and supports that? I think that’s entirely possible.

Avramovic: Let’s go back to Pristina. It looks like Kosovo slides slowly toward creating the army, without constitutional changes as we see on the ground.

DAS Palmer:  The United States fully supports the gradual, transparent transition of the Kosovo Security Forces. I don’t think there is any great rush on that. In fact, there is a lot of legislation pending in Parliament, including on rule of law, and it would be unfortunate for Parliament to be distracted by this issue. There is an understanding between the United States and Kosovo about how this process should move forward. It’s a multi-year effort, it’s not something that’s going to happen overnight. But Kosovo is an independent, sovereign country and this is fully consistent with Kosovo’s rights as a country and will, I think, proceed in a manner that supports regional peace and security.

Aramovic: And last one, speaking about UNMIK and international missions in Kosovo, what about return of IDP’s? Are you aware of the fact that last ten to fifteen years no more than forty Serbs live here in Pristina city?  Before 1999, about 40,000 Serbs lived here. So how come the Serbs do not live in cities in Kosovo after the war, except in a small part of northern Mitrovica?

DAS Palmer:  The United States strongly supports the return of IDP’s to their homes in Kosovo and we think it’s important that the authorities in Kosovo do everything possible to create conditions that are conducive to returns. Long-term, I would argue, that the full normalization of the Belgrade-Pristina relationship will support returns. That it will create a climate and an environment that is conducive to the return of those displaced, to their homes. It’s something that we’d very much like to see. Kosovo’s multi-ethnic character is central to the strength of Kosovo as a country, central to the strength of Kosovo as a society. We are committed to that. We are committed to supporting a multi-ethnic Kosovo and to helping a multi-ethnic Kosovo forward towards a prosperous European future.