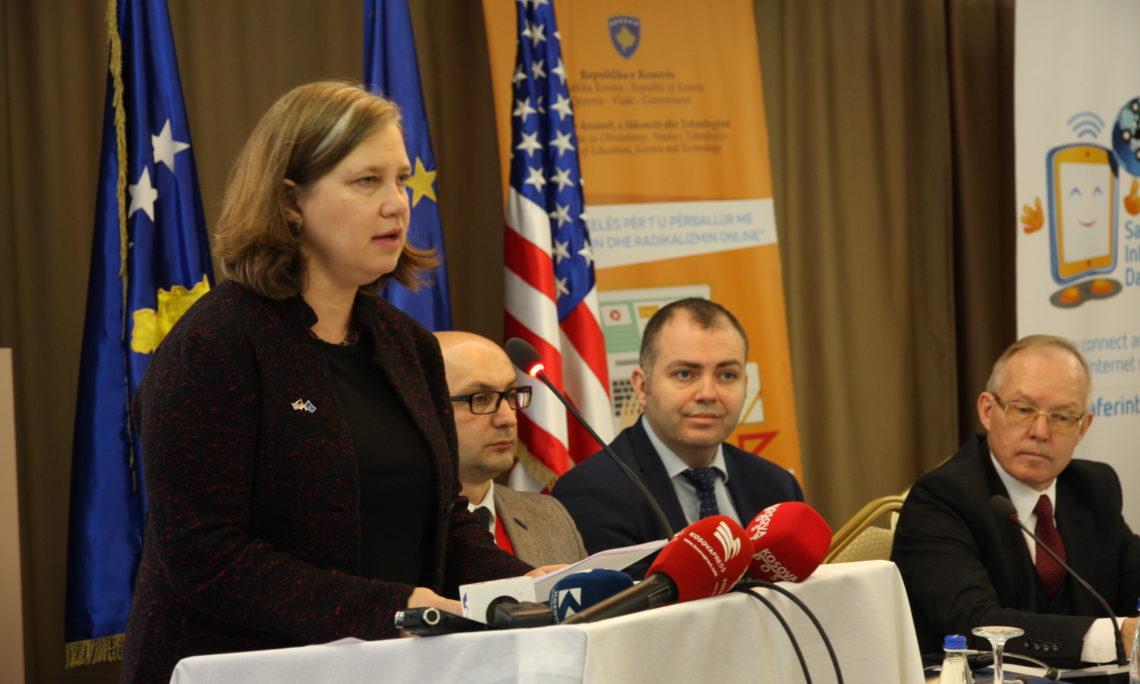 DCM Colleen Hyland’s remarks at the “Education as a key to prevent online extremism and radicalization”National Conference, February 2, 2018

Thank you very much for having me here today.

It’s very encouraging to see the Prime Minister here this morning, ministers, Ambassador Braathu, other colleagues, and especially to hear Prime Minister’s heartfelt words about his views about countering violent extremism amongst our youth. It’s also important to see that the press is here today because it is extremely important to get the message out into the community across Kosovo about the importance of looking for signs and reacting against negative influences in your children and in your community. And I see we also have police in the audience, and they are an important piece of this, as well.

The U.S. Embassy strongly supports Kosovo’s efforts to protect youth from radicalization and violent extremism, and your presence underscores the priority that Kosovo’s Government is placing on this issue.

In the past several years, we witnessed tragic results of online radicalization at a global level. We’ve seen terrorist attacks in Paris and London and Brussels that were all initiated by individuals groomed online by violent extremists and encouraged to carry out attacks in their home countries.

Violent extremists continue to recruit, radicalize, and mobilize individuals, especially young people to engage in terrorist acts. Their actions not only threaten safety, but also undermine our efforts to build peaceful, democratic societies.

Kosovo’s population, the youngest in Europe, with 53 percent of citizens under age 25 – that number seems to be going up – and with the high degree of internet usage, makes this conference particularly important. The specific emphasis of today’s event, shifting the focus in Kosovo’s education sector towards teaching critical thinking is a crucial element of equipping young minds with the tools to ultimately resist radical messaging.

Critical thinking skills enable young people to better evaluate the information they take in, to formulate and ask tough questions, to recognize errors in reasoning, to collaborate with their peers, and to question their own assumptions.  These skills will not only help youth become less vulnerable to terrorism or online radicalization; critical thinking will prepare youth to be Kosovo’s problem solvers of the future: in the economy, governance, and leadership.

As young people are learning about the world around them, they are also at their most vulnerable to nefarious online influences. ISIS and other terrorist organizations are employing extremely sophisticated digital requirement tools and strategies specifically targeted to youth for this exact reason. For example, social media is being used to promote radicalization with Albanian language propaganda reaching not only Kosovo Albanians, but Albanians throughout the region. This propaganda is so sophisticated and effective that hundreds of Kosovo youth have left to join ISIS and other terrorist organizations in Syria and Iraq.

Protecting youth from these threats requires a twofold response. We certainly need to continue our engagement with companies such as Facebook and YouTube to delete dangerous content, but the work you will do at this conference on better preparing youth through education is even more important to reduce their vulnerability to these threats.

The government of Kosovo has already done a lot to engage with digital companies, such as Facebook, to try to remove dangerous content. But this is an almost impossible task given that thousands of minutes of this user-generated content is being uploaded every second. Even with the most sophisticated technology, finding it and removing this content can be a challenge.

This is why we believe Kosovo needs to increase investment in education, which is key to any sustainable prevention measures. Education, especially the promotion of critical thinking, allows us to counter religious extremism by building resilient communities and children.

I see your work today as crucial to helping students address the psychological, emotional and intellectual appeal of terrorist narratives.

We greatly support Kosovo’s government efforts to incorporate critical thinking into the mainstream education curricula and we sincerely look forward to working closely with the government and other international partners to make all youth more resilient in the face of online radicalization and extremism.

Thank you again for your attention, and I wish you all a successful conference.