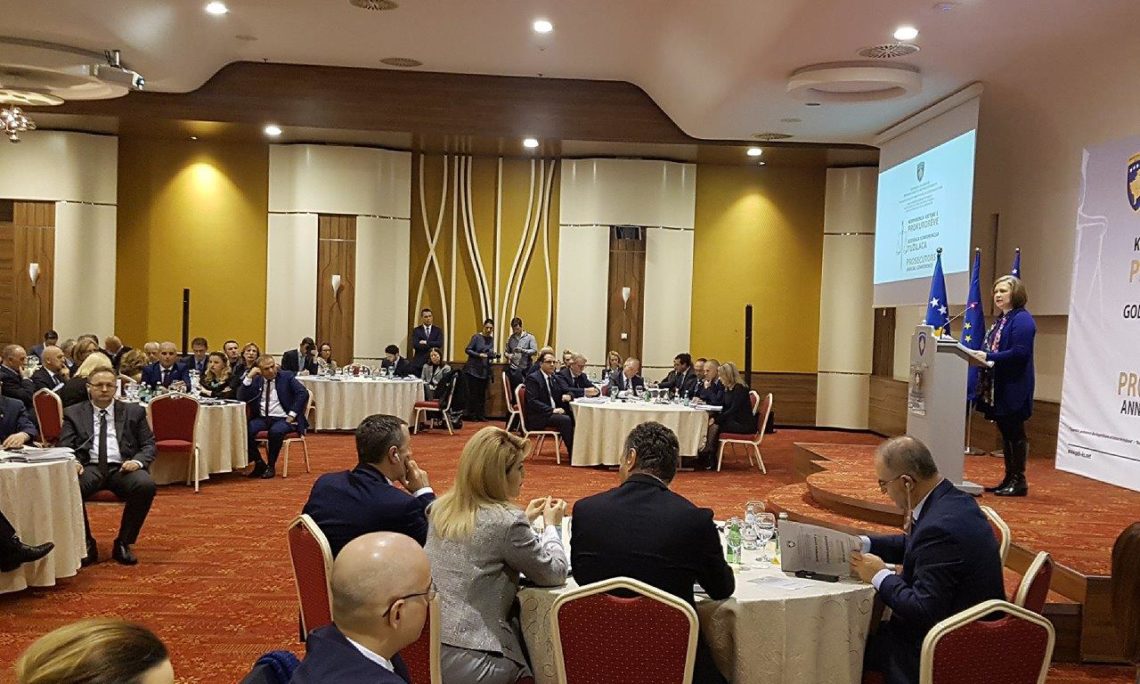 DCM Colleen Hyland at Annual Conference of Prosecutors, January 28, 2017
Good morning. First, I want to let you know that the Ambassador really did want to be here this morning and unfortunately was called to other duties. So I am here to deliver to you the message that he wanted to give you.

Thank you, Minister Hoxha, Chairman Isufaj, Chief State Prosecutor Lumezi, honored guests, prosecutors, and others for the opportunity to speak to all of you today. I know that it’s rare for all of you to be in one place at the same time, but it’s important that you do this on a regular basis, which is why the US Embassy and the Department of Justice, my colleague Michelle Lakomy, are proud to sponsor this event for the third year in a row. It’s an opportunity to share ideas and strategies with colleagues who you may not see frequently, reflect on the highs and lows of the previous year and establish important goals for the coming year.

Before I share with you some of our hopes and suggestions for 2017, it is important to talk a little about 2016. It was certainly a year filled with challenges and change for prosecutors. You began the year by expanding the composition of the Kosovo Prosecutorial Council to include elected members from each region and a new mandate that divided responsibilities between the Chief State Prosecutor and the Council. Decentralization of power is always difficult and frequently decreases cooperation. But I have to say that we have been impressed with how the Council has embraced its new role and how the Chair of the KPC and the Chief State Prosecutor have worked together to improve their cooperation and sharing of responsibilities. We believe that the KPC and the Chief State Prosecutor have made it a priority to improve efficiency and create a culture of professionalism among Kosovo’s prosecutors.

You also faced an extreme challenge when members of the Assembly began using teargas as a means of advancing their own agenda. That was a situation that would challenge any democracy and we believe that you acted appropriately. When members crossed the line from speech into violent and dangerous acts you made it clear that Kosovo was unwilling to tolerate that behavior – that while democracy encourages vigorous debate, violence has no place on the floor of the Assembly.

Finally, you succeeded in prosecuting and convicting a number of people charged with a variety of terrorist related offenses. All of the hard work you did since the original arrests started in mid-2014 resulted in successful prosecutions and a number of deservedly high sentences. They were a testament to police/prosecutor cooperation and we are proud the United States helped you to succeed.

Now, we have to admit that none of these successes have been without difficulties or stumbles along the way. The point is, they are definite steps in the right direction. They are evidence of an evolving prosecution system that is beginning to establish some professionalism, identify problem areas and make difficult decisions.

But, I would be remiss if I didn’t say that Kosovo’s rule of law institutions, and I am not just talking about prosecutors, need to take more seriously the need to fight corruption and appropriately prioritize threats to stability and growth. Surveys clearly show that the people of Kosovo do not trust their rule of law institutions and they believe corruption is endemic.

Kosovo’s future is directly connected to its ability and willingness to fight corruption and improve rule of law in all areas. There were a lot of arrests for corruption in 2016. Kosovo even improved its Transparency International Ranking. But the real measure of progress will be what happens to those cases in 2017 and what are the end results.

The Ambassador asked me to present you with three challenges for next year. First, you should fill the vacancies in the SPRK. It is virtually impossible to say you are serious about fighting corruption when the office handling the most serious cases in Kosovo is functioning at half its capacity. Second, you must increase the use of asset confiscation and forfeiture. The most effective way to counter organized crime and corruption is to take away the ability of criminal enterprises to conduct their business. You will not make progress fighting organized crime until you take this issue seriously. As prosecutors, you cannot blame judges for not granting confiscation if you never made the request in the first place. Every case involving corruption and organized crime should be viewed with an eye toward what can be confiscated.

Finally, you need to prioritize prosecutions based on seriousness of the offense and where the allocation of resources will have the most impact, not the ethnicity of the defendant. It is extremely difficult to convince the U.S. Government that Kosovo is heading in the right direction when we hear that someone accused of wearing an old Serbian military jacket is placed in detention, while someone accused of helping plan a deadly terrorist attack in Albania freely walks the streets.

These are not easy things to accomplish, but you have an immense amount of power. You have freedom from outside interference and the power to choose where and how to devout resources. You have an opportunity to take an affirmative stand for justice and against corruption, and to show the people of Kosovo that you are working hard to change their perceptions.

I encourage each of you to dedicate yourself to raising your professionalism this year by considering the filing of an indictment as a first step in achieving justice, instead of the last time you have any responsibility for the outcome. Just recently you selected Chief prosecutors from each region. I congratulate each of you on your selection and challenge you to help implement the fight against corruption in each of your offices.

I hope that each of you takes my words to heart today and knows that the United States will continue to aid you in your efforts over the next year. The state of the rule of law institutions in Kosovo will determine what kind of future this country will have.