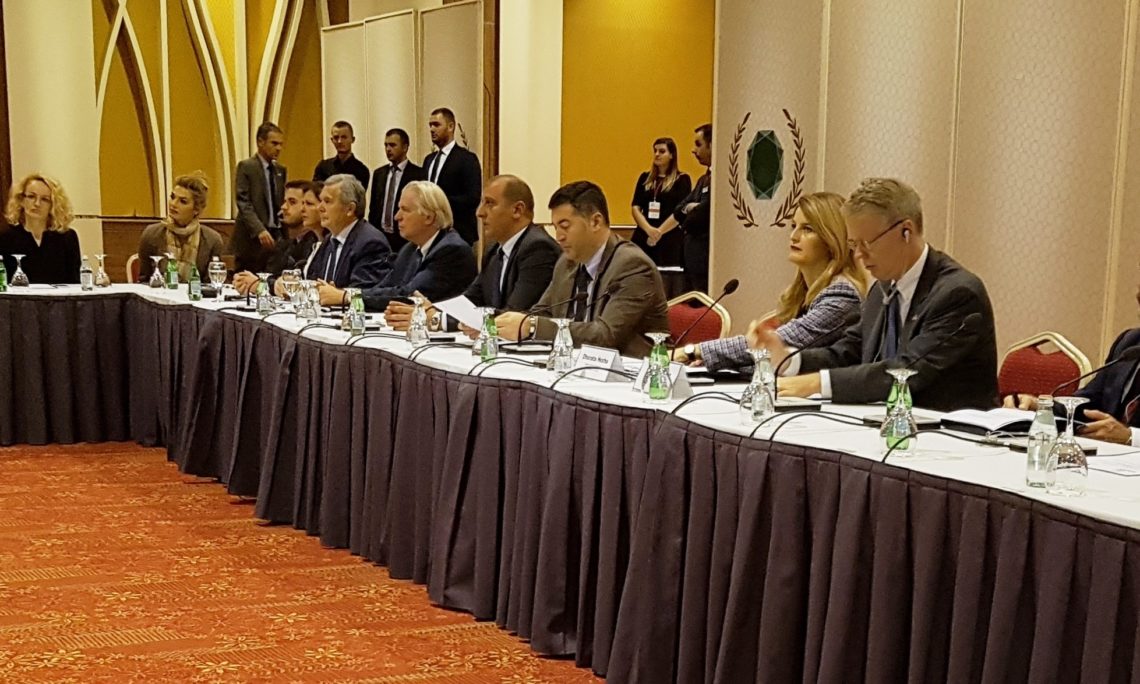 Minister Hoxha, Justice Rama, deputy ministers, distinguished colleagues.  Thank you for welcoming me here today.  And thank you for your incredible leadership on this issue, including the critical new legislation you will submit early next month.

Progress on women’s property rights is one of my top priorities, and something that I personally feel quite strongly about.  So I’m pleased to speak to you all today.

And when we see that only 4% of women in Kosovo are able to inherit land, that only 19% own land, we know we have our work cut out for us.

Of course, this issue is also far too personal to be a simple matter of statistics.

My staff shared a story with me about one Kosovo woman on our own team who successfully bought property, only to then travel to the local municipal office and find herself strongly discouraged from registering this same property.  The official argued with her over her rights and tried again and again to convince her not to go through with it.  Ironically, his argument was that one day she would inherit property from her father, and therefore simply didn’t need to acquire land on her own.

She was lucky.  She knew her rights and she stuck to it.  But we cannot ask every woman in Kosovo to run such a coercive gauntlet.

And this wasn’t a failure of law.  Kosovo already has good laws on the books that guarantee a woman’s equal right to property and I commend you for this.  But I think we are all troubled by the degree to which these laws are not yet consistently applied.

In some ways, this would be easier if the problem simply required a legislative fix.  But this is something much deeper.  Deeper because the right to own and inherit – these are not secondary economic benefits.  These are fundamental human rights, essential to both equality and empowerment.

And this is not just important for the women of Kosovo, but for all of Kosovo’s citizens.  We know that when women are empowered, they participate more effectively in their communities, the economy, and in civil and political discourse.  And when women have a stronger voice, community institutions themselves are more likely to be responsive to the needs of the community as a whole.

Indeed, this may be a national issue, but it will be up to each municipality, each community, and to each family to change the status quo.

In July of this year, I went to Viti to announce the USAID Property Rights Program’s national campaign of grassroots, community-level activities.  These activities are intended to promote change in the social attitudes and behaviors that still impede the ability of women to exercise their property rights freely.

This began as a media campaign, with a number of television and radio spots supporting the rights of women to own and use property.

A second phase of the national campaign kicked off this summer, including billboards, community outreach events, inter-active theater performances, and activities directed at youth outreach.

Along with policy-level initiatives like the recent development of the National Strategy on Property Rights, these community programs are critical to ending the informal practices of omitting women from lists of legal heirs, precluding them from participating in inheritance proceedings, coercing women to renounce their property rights in favor of male heirs, or preventing them from registering or transferring property once acquired.

Friends, this has to stop.

And this isn’t just coming from me.  I hear this in my conversations with community leaders, business owners, and civil society groups all across Kosovo.

And by the way, we know that these rights are guaranteed to women under Kosovo’s Constitution and its Law on Inheritance.  And so to me, on a very basic level, upholding these rights is about Kosovo’s ability to uphold the rule of law.

And as I noted two weeks ago at the Women’s Economic Forum, failure to make progress on these issues quite simply erodes Kosovo’s ability to grow its market economy, build prosperity, and – critically – pass it on to the next generation.

Because the evidence around the world shows clearly that greater participation by women in a country’s economy is a big part of what leads to greater prosperity.  We know in our gut that this is true.  And we know that the exclusion of women from opportunity and progress must not continue.

You know, in my own country, more than a century passed between independence and a woman’s right to vote.  And even now, almost a full century after that critical milestone, we still have plenty of work to do.

Every country does, every community does.  But Kosovo simply cannot afford not to make progress.  And soon.

I know that so many of you are working hard to bring about real change, to eliminate obstacles to fully-exercised property rights for women, and we are proud to partner with you.

As President Obama said: “The best judge of whether or not a country is going to develop is how it treats its women.”

I thank you for your efforts, and together, I know we can do better.  And we must do better.