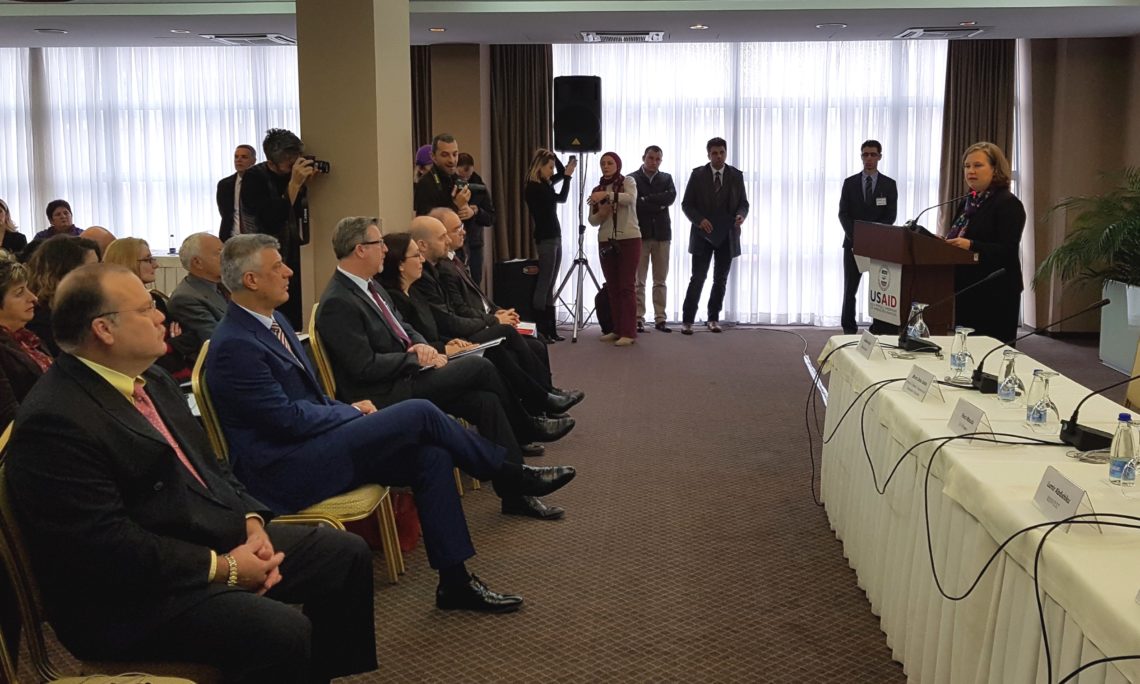 Chargé d’Affaires Colleen Hyland remarks at the Conference on Human Rights and the Integration of Marginalized Groups in Kosovo December 8, 2016

Good morning President Thaçi.  Thank you for speaking out for the inclusion of all Kosovo citizens.  It is an honor to join you In “Stand(ing) up for someone’s rights today!” – which is the theme of this year’s UN Human Rights Day.

A special note of gratitude is also due to our ATRC partners who implement USAID’s Engagement for Equity program that focuses on empowering marginalized groups in Kosovo and who organized today’s event.

And, let me extend a warm welcome to all supporters of human rights.

The State Department is also marking Human Rights Week, with today’s theme being “Democracy for All – Advancing Inclusive Democracy.”

Inclusivity is more than just a societal good, it is about fairness and equality; for women, for minorities, for persons with disabilities, and for members of the LGBTI community, all of whom face societal and official barriers and prejudice, in housing, education, employment, and medical care.

Inclusion also means the freedom of belief.  I want to take this opportunity to express support for the draft Law on Religious Freedom, based on the Venice Commission’s recommendations, which is now in the Assembly.  The law will protect religious communities, as well as maintain secular rights. This law supports human rights.

We know that Kosovo’s future, its ability to develop economically, to achieve further Euro-Atlantic integration, to fight corruption, and to advance in so many other areas, will take the efforts of all citizens.  You simply cannot afford to exclude anyone.

We know the full integration of marginalized groups will tangibly benefit not only these groups but society as a whole.  We have seen time and again that nations achieve their goals best when they have participation from across the spectrum.

I applaud the efforts of so many of you here today who have dedicated yourselves to the progress of human rights in Kosovo.  Having served here during Kosovo’s independence I see first-hand how far this country has progressed.

This year, for the third year in a row, LGBTI civil society groups organized a march on the International Day against Homophobia and Transphobia, in which 250 people, including President Thaçi, and Ambassador Delawie marched on Pristina’s main street.  It is our hope the Advisory and Coordination Group will complete its Action Plan for LGBTI rights.

Recently Kosovo’s Central Election Commission created a digital mapping platform which allows persons with disabilities to be informed about polling centers, and to choose a more accessible location if needed.  This remarkable initiative ensures the basic right to vote, as well as societal inclusion.  Kosovo also approved a strategy for persons with disabilities, and adopted a Law on the Rights of People with Paraplegia and Quadriplegia.

However, challenges remain.  Persons with disabilities still cannot access many schools, courts, and places of employment, because the strategy and law require government implementation.

Kosovo has made enormous progress but good laws alone, are not sufficient.  Every community will have to decide that it is simply not acceptable to exclude their neighbors, to leave them outside the mainstream.

Here in Europe’s youngest country, where more than half the population is under 25, today’s conference is a call to action.  There is much to be done to ensure all of Kosovo’s citizens have opportunities and are empowered to effect change in their communities.

The United States is proud to be your partner on these issues and will continue to stand with Kosovo and all of you here today, to advance human rights.

Congratulations to you all, for your tireless efforts to ensure Kosovo can develop and employ the full potential of all its people, and that Kosovo is a society where all voices are heard.