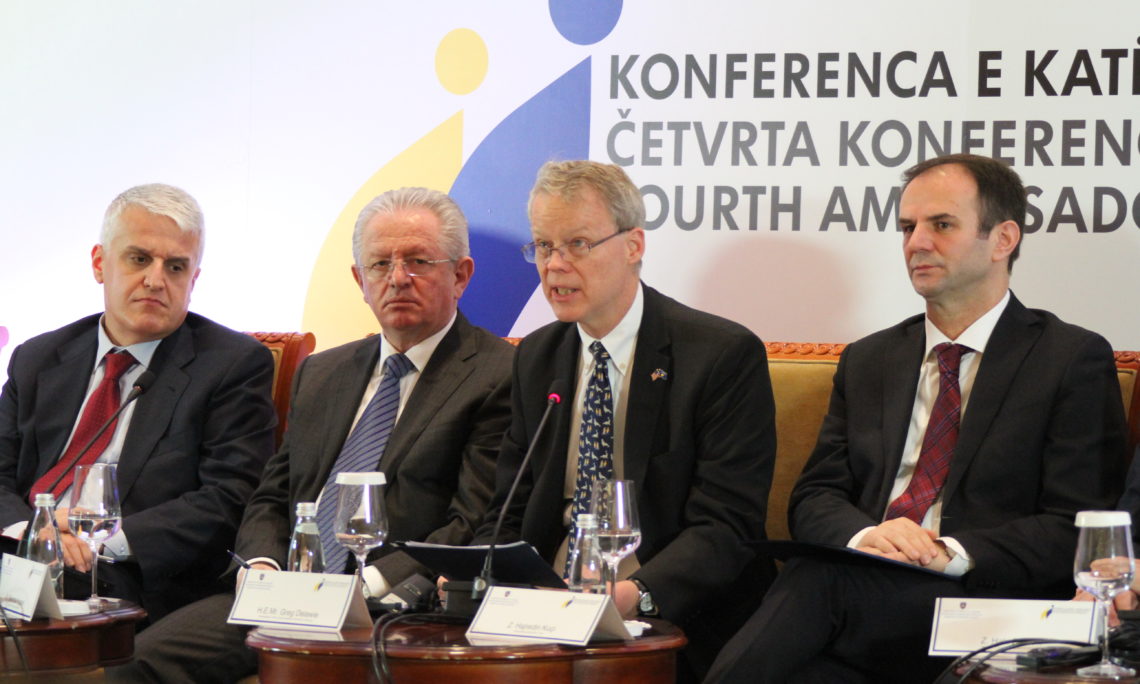 Ambassador Delawie’s remarks at the 4th Conference of Ambassadors “Kosovo’s Security and the new relations with NATO”, December 20, 2016

I’d like to thank Minister Hoxaj and the MFA for organizing this conference.

It’s a pleasure to be here today and I’m pleased to share the stage with such esteemed colleagues.

This morning’s panel is titled “Kosovo’s Security and the New Relationship with NATO.”

I’ll speak about Kosovo’s security situation in a moment, but I’d like to begin my remarks this morning by focusing on Kosovo’s evolving, and expanding, relationship with NATO.

I’ve spent almost my entire career serving in NATO countries and working on NATO issues.  I understand what an important role NATO plays in Europe and I understand how important it is for Kosovo to develop a robust relationship with the Alliance.

That’s why I was so pleased to see the (already mentioned) letter from Secretary General Stoltenberg to PM Mustafa.  In his letter, the Secretary General laid out an extensive agenda for increased cooperation between Kosovo and the Alliance.  It was a very encouraging response and I was particularly pleased to see that there will be more joint efforts in the areas of cyber defense, education and training, participation in exercises, and public diplomacy.

The letter from the Secretary General sets the stage for additional cooperation, but it also reaffirms the important progress that Kosovo has already made in aligning its values with those of the Alliance.  It confirms that Kosovo’s future lies firmly in the Euro-Atlantic family.

Now, as Minister Hoxhaj has said, Kosovo is making the transition from a security consumer to a security provider.

I should note, however, that the transition into a provider of security will not occur overnight.  It will be a long process—one that will require both considerable time and effort.

For that reason, I am very glad that KFOR remains in this country to guarantee a safe and secure environment and freedom of movement.  It’s important to recognize the continuing importance of having a robust KFOR presence serving in this country.

KFOR is an institution appreciated, supported, and respected by both Kosovo Albanians and Kosovo Serbs alike.  I know this is already understood, but I hope ambassadors to troop-contributing nations will emphasize to their host governments what an important role their troops play in this country.  Thanks to their efforts, KFOR continues to serve as a stabilizing force in Kosovo and throughout the region.

There will come a day, however, when the political and security situations in this country will improve sufficiently to discuss a departure of KFOR.  We are not there yet, but we do need to begin prudent contingency planning for that day.

And this leads me to the topic of the transformation of the Kosovo Security Force into the Kosovo Armed Forces.  I understand that this is a sensitive topic for some, but it’s a necessary conversation.

It is imperative that the international community support the orderly transformation of the KSF to the KAF with a limited, territorial defense mandate that is sensitive to regional concerns.

However, the transformation should occur in a constitutional manner and transparent fashion that can win support from NATO Allies.

I know from my time working with NATO that it’s difficult to bring everyone on board and reach consensus.  You can’t just wave a magic wand and you can’t take any shortcuts. An issue as important as transformation needs to be handled in the right way—it will require dialogue, transparency, and a willingness to compromise.

I know that Minister Demolli and General Rama, with whom I’m sharing this stage today, also understand that the process must be inclusive.  They understand that a future KAF can only be effective if it has the support of all of its citizens.  That is why I’m so pleased to hear about their efforts to bring more underrepresented communities into the KSF and to build a more diverse force.

That’s exactly the mentality and efforts that are needed to make an eventual KAF transformation a success.

I’m encouraged by the progress that Kosovo is achieving in the security sector.

It’s not difficult to look into the future, the not too distant future, and see a time when Kosovo has a robust bilateral cooperative relationship with NATO.  A time when Kosovo serves as a security provider, linking seamlessly with its neighbors to provide avenues for engagement, advice and assurance.  And a time when the country is bolstered by an efficient and respected security force that represents the country’s rich multiethnic diversity.

The United States is proud to stand with Kosovo and to provide support as the country moves forward in this direction.