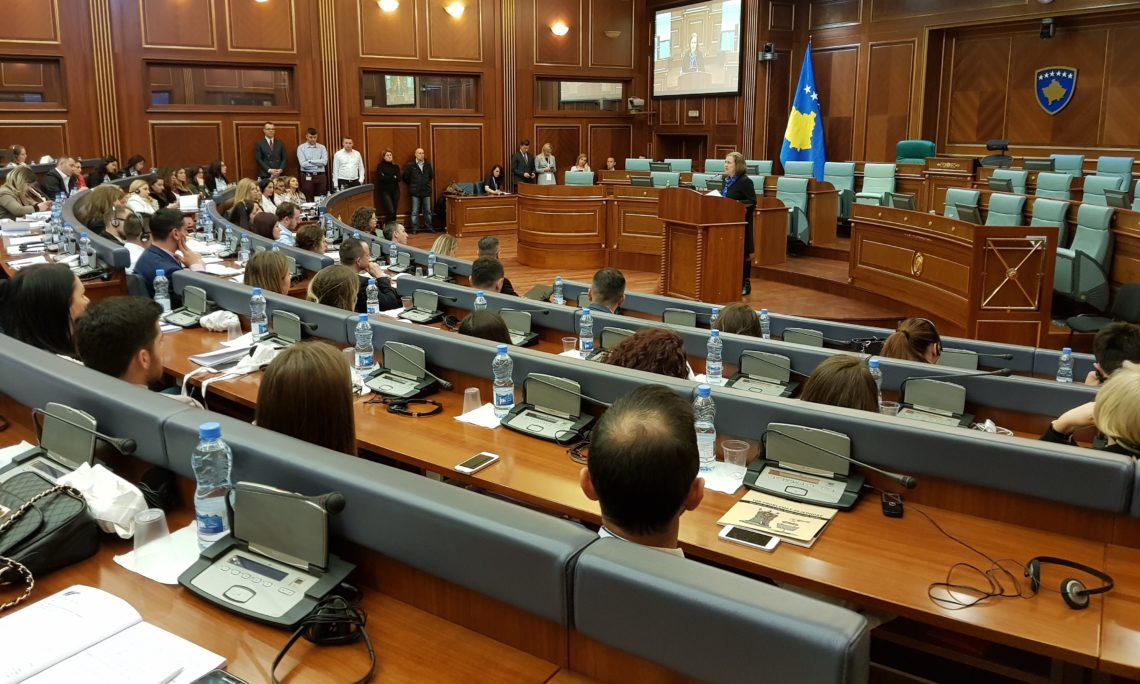 Speaker Veseli, NDI Director Chavarria, Honorable Gresa Caka,  Chair of the Women’s Caucus Mjaku-Millaku, Members of the Assembly, guests, thank you for including me here today to help kick-off the 6th annual Week of Women.

This week is a celebration, and it’s also an opportunity – to break down barriers to women’s political and economic participation and to mentor and nurture the next generation of women leaders.

This year’s theme of transparency and accountability couldn’t be more relevant or more timely.  As Kosovo embarks on its 2nd decade of independence, fighting corruption and bringing greater transparency to public institutions is vital to everything Kosovo is striving to achieve.

To do that Kosovo needs to be able to pull from the talents and energy of every citizen, regardless of gender or religion or race or anything else.  And I think we need to acknowledge that right now that’s not happening.

This is a problem that transcends professions, sectors, and regions.  But even if we just look at the makeup of Kosovo’s government, right now we can see that Kosovo is falling short.  There are only two women Ministers in Kosovo’s government, at the Assembly no parliamentary group is led by a woman, women are sorely underrepresented among the leadership of Kosovo’s political parties.

And if we look across Kosovo’s 38 municipalities, we see no women mayors.

This problem is not unique to Kosovo.  We struggle with this in the U.S. as do countries around the world.  But here’s the good news – there are talented, innovative, dedicated women all across Kosovo ready to take their place in public life – you just have to make room for these new voices.  Allow them to be heard.  The next leaders of Kosovo may be in this room, ready to learn the skills they need to advocate for their communities and connect with voters.  And there are so many gifted women already fighting every day to expand access to justice, root out corruption in public institutions, and shine a light on the issues affecting Kosovo’s citizens.

Right here in Pristina the Basic Court President Aferdita Bytyqi has been working this past year to push through vital reforms to ensure access to justice for Pristina’s citizens.

Journalists like Saranda Ramaj – who has fearlessly reported on problems in Kosovo’s healthcare sector – are showing journalism at its best, giving people vital information about their society that other forces try to keep hidden.

And just two days from now two accomplished, talented women from Kosovo’s National Audit Office are starting on a 4-month international fellowship in Washington, DC at the U.S. Government Accountability Office with fellow auditors from all over the world.  Who knows what new knowledge and skills they’ll bring back to Kosovo to help their agency do its best every day to keep Kosovo’s institutions accountable to the citizens they serve?  Expectations are high.

These are just a few examples of many, but Kosovo needs so many more women to be engaged.  And not just at the highest levels of government but in every aspect of Kosovo’s civic life, in every municipality and community, from youth councils to municipal assemblies to the Cabinet itself.

We know that when corruption flourishes, the effects are felt disproportionately by women, so we need to redouble our efforts to make sure women’s voices are heard, and that women are no longer relegated to the sidelines of Kosovo’s political and economic life.

It’s not just the right thing to do, it’s the smart thing to do, because time and again we see that countries with greater gender equality are more stable, prosperous, and democratic.  The solutions are in this room, so let’s take action.

I wish you all a challenging, exciting, and productive week ahead.

I hope that next year, we’ll have new names to mention as major success stories.

Thank you, and have a great week.