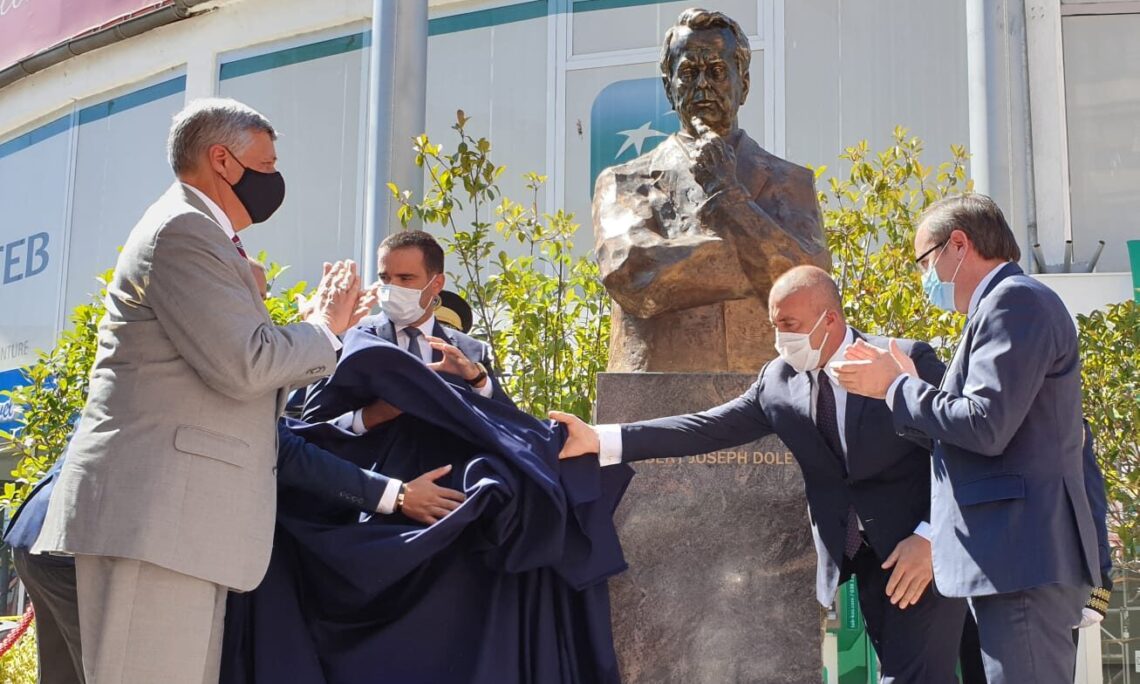 Let me begin by thanking the leaders, from both government and the private sector, who made this day possible. And special thanks to sculptor Luan Mulliqi, a longtime friend of America and a bridge between our countries. Luan, as we have seen, has produced a remarkable testament to a remarkable man.

Today we mark not only the unveiling of a statue, but the life of an American hero and stalwart friend of Kosovo. On this day, 30 years ago, Senator Bob Dole traveled to Kosovo for the first time. This is significant, as many have remarked that his visit in 1990 was the turning point for Kosovo’s freedom. His visit opened the eyes of the international community to the ongoing human rights abuses occurring here.

Today, we celebrate the life of a leader whose personal courage and dedication to the cause of freedom have long inspired the people of the United States and Kosovo, and friends around the world.

A year ago, at the groundbreaking ceremony, I noted, “Throughout his lifetime of service – as a hero of the American Army in the Second World War, in the U.S. Congress, as a candidate for President of the United States, and today as one of our most respected senior statesmen – Bob Dole has been a leader in promoting the cause of freedom throughout the world. Thus, it was no surprise that he became an indispensable supporter of Kosovo – standing alongside the people of Kosovo in your own quest to build a country strong and free.”

My wife Alison and I count Bob Dole among our personal heroes, not only because he is a champion of freedom, but because he has always sought to rise above politics, reaching across party lines to cooperate for the good of the people of the United States and our international partners.

A year ago, I noted the significance of the location where we’re standing now – the intersection of two streets named after longtime political rivals, from different parties. They did not always agree on policy, but Bob Dole and Bill Clinton grew to be great friends who shared a love of country and a dedication to public service. Because even though they came from different ends of the political spectrum, their ultimate goal was the same – to serve and protect the people.

Let us continue to honor the work of Senator Dole not just with this wonderful statue, but by working together to build a future of peace, justice, democracy, and prosperity for the people of Kosovo and the region. Thank you; faleminderit shumë; hvala.