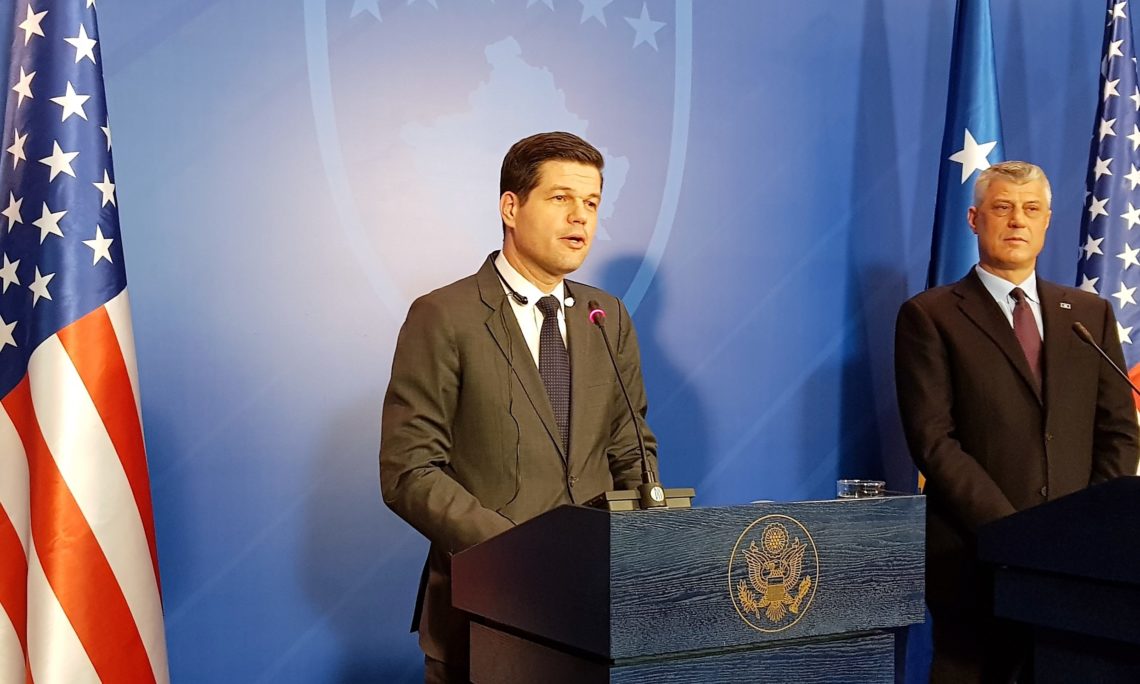 A/S Mitchell: Thank you, President Thaçi for your hospitality and for welcoming me here in Kosovo.  It was very important for me, on my first trip as Assistant Secretary of State for Europe and Euroasia, to start my first trip to the Balkans in Kosovo.  The United States and Kosovo have a very strong and deep relationship, a very deep friendship and this administration is committed to continuing and deepening that friendship.

I wanted to reiterate in this first stop that the U.S. is for a sovereign, multiethnic and democratic Kosovo, and to reengage in support of the Euro-Atlantic path for the Western Balkans.

I want to assure you of our close and active role in the year ahead.  I had a good opportunity with the President to talk about the U.S. cooperation with Kosovo in the fields of security, economics, and energy, and particularly conveyed our appreciation to the close cooperation that we have with Kosovo in counterterrorism and the efforts to defeat ISIS.

I am cognizant of the fact that Kosovo has recently marked its tenth anniversary of statehood. And Kosovo has come a long way in those ten years in building credible institutions, in showing a phenomenally high economic growth rate, and progress in its security transformation.  The country has very important steps to take now in the year ahead to ensure a continued path towards a western future.  We talked about normalization and the importance for Kosovo staying very closely engaged with Serbia in the dialogue.  We talked about the border issue with Montenegro and the importance of resolving this as part of a path towards visa liberalization.  We talked about security transformation and securing support from all parties and communities for a constitutional amendment, and I underscored to the President and I will say it again here that no one has a veto on Kosovo’s security.  And we talked about the rule of law and the importance of continuing the fight against corruption in order to ensure a democratic future and economic growth for Kosovo.  In all these areas, only Kosovo can choose its own future, but I want to assure all of you that the United States has been and will continue to be working along side Kosovo every step of the way.

So, thank you again, President Thaçi for your hospitality.  Very happy to be here in Kosovo and look forward to hearing your questions.

Q:  Hello.  I am Arton Mulliqi from Radio Television of Kosovo.  I have a question for you, Mr. Mitchell. Media in Serbia, which are also being quoted by Kosovo’s media, report that your visit to the western Balkans countries, will bring a meeting with the President and other heads of the Serbian state where you will introduce a new plan for Kosovo, which – as it is reported – is an annex to President Ahtisaari’s plan dealing with additional authorities that you will propose for the Association of Serb Majority Municipalities. In exchange, Kosovo would get Serbia’s approval for membership in various international organizations.  Is this true?  Does such a plan exist?  Are you going to do this during your visit to Serbia or are these just useless reports?

A/S Mitchell: Thank you for that question.  I did see that speculation on the trip on the way over and I thought that was very creative journalism.  I can tell you I didn’t come to unveil any specific plan.  What I did come to do is engage with both Kosovo and Serbia on the question of their joint future, to talk about the Dialogue, to talk about a western path for both countries and for the western Balkans, and I am looking forward on having those discussions both here and in Serbia.

Q: Besnik Tahiri from Klan Kosova.  Mr. Mitchell, the first question is you said before that the United States will not leave a veto when it comes to creating the army of Kosovo.  Are you talking about Serbians here, local politicians, and are you going to tell them that here.

And the second question: shortly, do you see any growing influence of Russia in the Balkans, especially in Kosovo, when it comes to the north? Thank you!

A/S Mitchell: Thank you for those questions.  The United States has been a very close supporter of the transformation of the Kosovo Security Force.  We will continue to support that transformation at all levels.  I think our friends in Belgrade are very familiar with the American position.  I look forward to reiterating that when I’m in Belgrade.

To your second question: Yes, we do see Russia playing an increasingly destructive role in much of the Balkans, in spreading disinformation, undermining democratic institutions, and we’ve been clear in our conversations with the Russians that that is neither in their interests nor in the interest of people of this region.