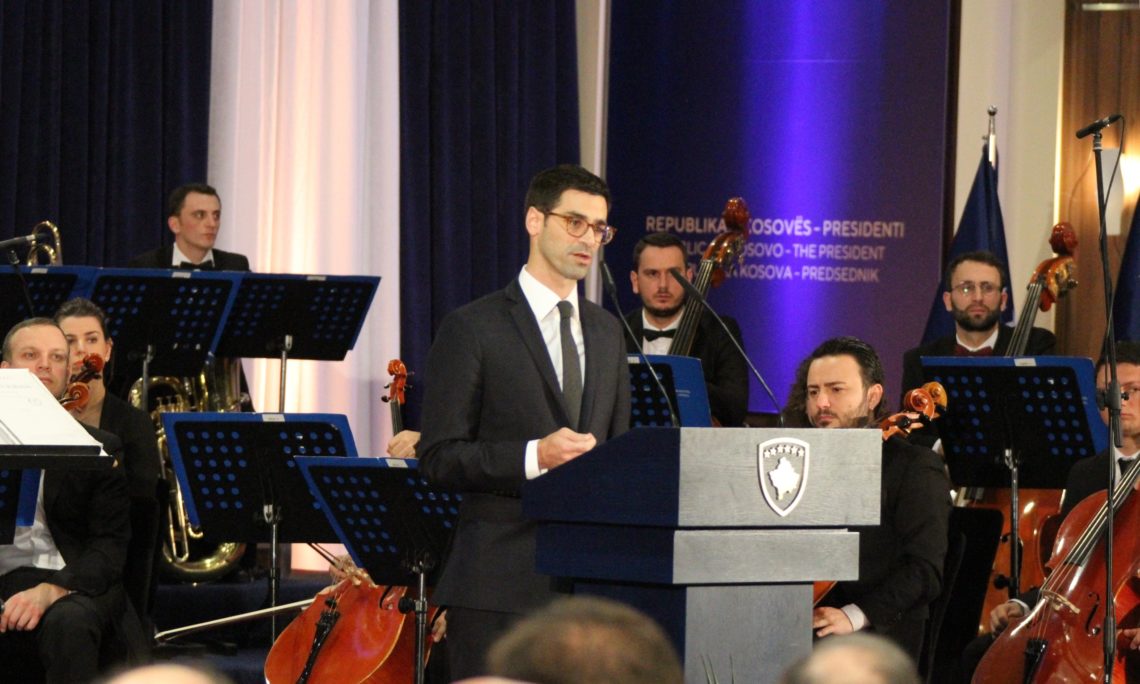 President Thaci, Prime Minister Haradinaj, Assembly Speaker Veseli, other distinguished foreign colleagues, I am honored to stand with you today on behalf of the United States of America to congratulate you—and all citizens of Kosovo—on the 10th Anniversary of your independence.

I am also proud to celebrate this occasion with United States Congressman Eliot Engel, who many of you know has been a steadfast supporter of America’s relationship with Kosovo.  Additionally, I welcome the attendance of USAID Assistant Administrator, Brock Bierman, whose support of development and civic engagement projects for Kosovo has been instrumental.

Yesterday, I had the opportunity to visit Prizren, where Kosovo’s long and storied history stands side-by-side a vibrant, modern society.  On this special day, we acknowledge the debts and sacrifices of the past, recognize the vision, courage, and strength of those who paved the way to the present and prepare for the known and unknown challenges of the future.

The United States and Kosovo have shared a special relationship since the beginning of this newest phase of your history, and we are proud to have played a role in your independence.  We stood with you in 1999, and we will stand with you as you continue to build on a decade of reform and progress.

You have forged a sovereign nation built on democratic values, human rights, and respect for the rule of law.  We understand the success of our respective democratic institutions and open societies depends on individuals who are willing to serve the people and put the nation’s interests above their own. There are many across the globe – terrorists, autocrats, kleptocratic oligarchs – who would like to see us fail.  But together, through continued hard work and determined commitment to our values, we will persevere.

The Republic of Kosovo has come a long way since 2008.  You have established government, security, and judicial institutions built on democratic values and the rule of law.  Your  Stabilization and Association Agreement with the European Union is  a key step on your path towards EU membership and a Euro-Atlantic partnership.

You have established the Kosovo Security Force, the Kosovo Police, and the Agency for Emergency Management that are providing safety and security for all the citizens of Kosovo.  The KSF has developed into a professional, multi-ethnic force, trained to NATO standards, providing security at home and in the region.  The KSF’s efforts to recruit from all of Kosovo’s ethnic groups throughout the country sets an example for others to follow.

Your participation in the Dialogue with Serbia has improved freedom of movement, integrated the police and judiciary, and extended government services to Kosovo citizens in the north.

Your partnership with America’s State of Iowa and the Iowa National Guard has become the model for strengthening security cooperation and training. The annual EAGLE exercise exemplifies the partnership between our nations.  Major General Tim Orr, the Adjutant General of the Iowa National Guard, has traveled from the heartland of America to mark this tremendous partnership. NATO KFOR, including its 650 U.S. service members, continues to provide a steadying hand. A generation of U.S. veterans look back with pride on their service in KFOR and know the security they helped provide created the space in which you built a new nation.

I want to stress that the strong partnership between our countries is supported by both political parties and by both the Executive and Legislative branches of government. Just last week, your Embassy in Washington hosted an early 10-year anniversary celebration. The President’s National Security Advisor, Lieutenant General H.R. McMaster attended, along with Undersecretary of Defense John Rood. It was a wonderful celebration in Washington, but it was important to me to come here and celebrate with you in Pristina.

Within the Executive branch, our Department of State and Department of Defense have a united vision and look forward to partnering with you to grow your economy, strengthen your political institutions, and advance your security force’s capability to provide for the safety and security of your citizens.

In a time of international turbulence, hard challenges stand before us.  And just as in those early years, the United States will stand with you as you tackle the challenges that lay ahead.

As we know from our own tumultuous history, a free and prosperous future depends on the difficult choices of today.  Citizens and leaders of Kosovo – of all ethnicities – will have to choose:  Do you want a future characterized by ethnic tension or one characterized by cooperation and respect for all people?  Do you want to live in a frozen conflict, isolated from the Euro-Atlantic family, or will you continue down the path of western democratic principles?

We encourage Kosovo’s leaders and citizens to continue to tackle corruption, to root out organized crime, to strengthen the rule of law, and to bring justice to victims. This means taking great care to refrain from statements that might encourage violence, especially against vulnerable minorities.  This means looking for ways to be a good neighbor and to contribute to regional security.  This means ratifying the Border Demarcation Agreement with Montenegro, a new member of NATO.  It also means continuing to seek a comprehensive agreement on the normalization of relations with Serbia.  There is no alternative to dialogue.  Kosovo’s future is not as an island, but as an integrated member of the regional and international community.

America is confident Kosovo is up to the task.  Ten years ago, you gained your independence. Today, you have an opportunity to choose your future path.  You have a strong ally in the United States.

And as you embark on your next decade of statehood, we look forward to deepening our cooperation supporting Kosovo on the path to further Euro-Atlantic integration. Thank you for the opportunity to celebrate with you here this evening.