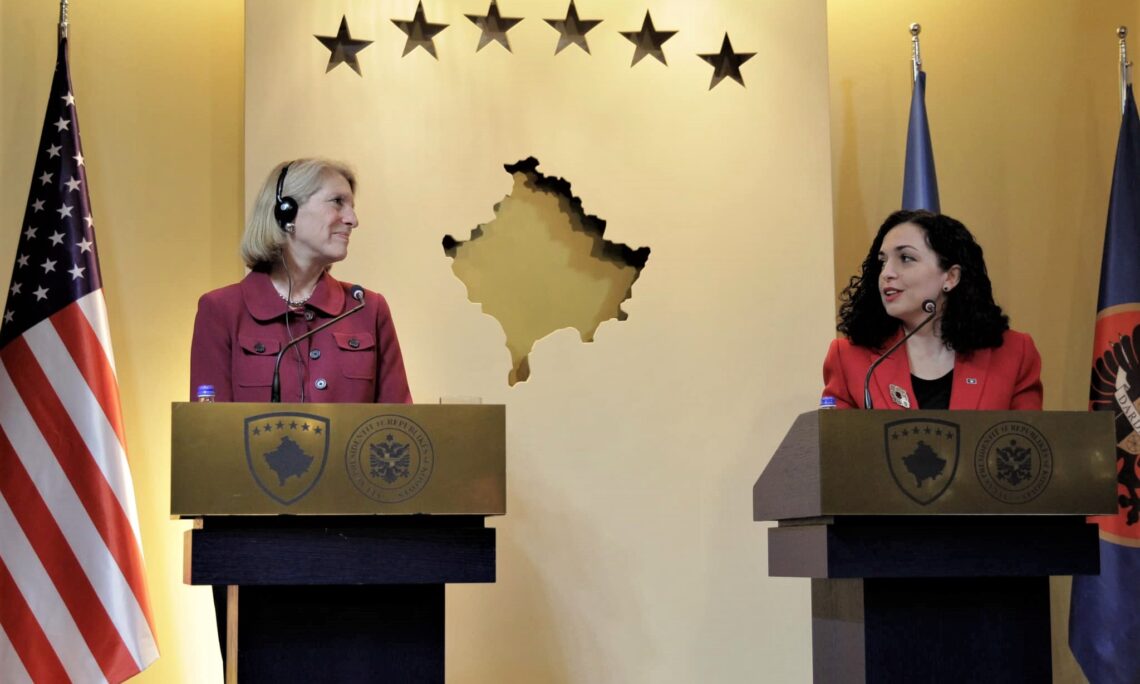 Thank you so much Madam President. It’s wonderful to be here in Pristina, on my first visit as Assistant Secretary. I had the privilege of meeting your President in Washington and it is such a delight to continue the conversation here in Kosovo. And I will say, you organized a beautiful day for me. As our flight was landing and I looked out the window, I had the most stunning view of your beautiful country. So, wonderful to be here with you.

As all of you know, we recently lost one of the strongest U.S. advocates for Kosovo’s independence and sovereignty – Madeleine Albright. Secretary Albright was deeply devoted to Kosovo and its future. She saw the promise of this young, vibrant country – a country committed to building resilient democratic institutions and growing an economy that delivers for its citizens. I want to also acknowledge President Osmani’s wonderful tribute to Secretary Albright – decreeing a national day of mourning – and for travelling to Washington early tomorrow, together with Prime Minister Kurti, to honor her memory at the upcoming funeral in Washington.

I’m here to assure you that Secretary Albright’s commitment to Kosovo’s future very much remains a U.S. priority. As many of you know, I’m here at a challenging time, a defining moment for Europe and the Western Balkans in particular. Russia’s unprovoked and unjustified war against Ukraine has demonstrated how important and urgent ongoing work is to ensure Kosovo and its neighbors continue reforms necessary for their democratic consolidation and for their integration into European and Euro-Atlantic institutions. Although hard-earned, we must not take peace and Kosovo’s progress for granted. All of us must fight every day to deliver for our citizens.

That means advancing efforts to ensure Kosovo takes its rightful place in European and Euro-Atlantic institutions, including through an agreement on normalized relations with Serbia centered on mutual recognition. It means improving good governance and rule of law for all Kosovan citizens, something I know President Osmani has been deeply engaged in within her initiatives as part of President Biden’s Summit for Democracy. Thank you, Madam President, for your commitments to fight corruption, advance democracy, and protect human rights. Finally, it’s clear to me that Kosovo’s greatest resource is also something worth protecting – your young, innovative workforce. The United States will continue to work with you as you expand your economy, increase regional integration, and build a strengthened, diversified energy sector.

Finally, I know that the Kremlin’s unprovoked, brutal war against Ukraine has, in many cases, reopened old dark memories from Kosovans’ past experiences in the 1990s. The empathetic and humanitarian leadership Kosovo has demonstrated, despite this reawakened trauma, is remarkable. Time and time again, Kosovo has shown the world that when people are in need, its doors are open. We thank you for your early and generous offer to temporarily host Afghans before their resettlement. So far, because of your generosity, almost 600 Afghans have departed Camp Liya at Bondsteel to start new lives in the United States. That’s 600 lives beginning a new chapter because of Kosovo’s hospitality and generosity. Similarly, I want to thank you for your generous offer to host Ukrainians seeking refuge, including Ukrainian journalists.

I know that many in Kosovo are worried about Kosovo’s security at this unsettling time. I want to assure you that the United States’ commitment, and that of our allies, remains iron clad. KFOR, NATO’s largest deployment, is the most visible manifestation of our continued commitment to Kosovo’s security and stability.

The United States is proud to call Kosovo our partner. Thank you so much.