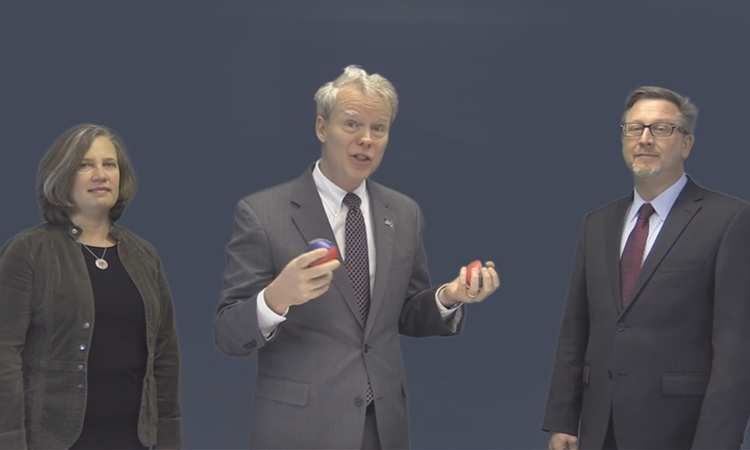 Ambassador Delawie:  I think we all agree that corruption is a big problem in Kosovo. But sometimes when you want to find solutions for big problems, it’s easier to break them into smaller parts. One part of the solution is making it harder for corruption to happen.  What can we do about that?

USAID Mission Director Hope: One of the projects the Embassy has supported is e-procurement, creating a public record of what is going on with government money.  When journalists and the public can easily track what the government is doing, it will be much harder for people to do corrupt things.

Ambassador Delawie: Thanks!  Another part of the solution is ensuring that corrupt officials are held accountable. How are we working on that?

Deputy Chief of Mission:: The Embassy provides training to police, prosecutors and judges, to ensure that they know how to investigate, prosecute and convict people who are acting in corrupt ways.  We’re also helping to improve Kosovo’s laws and judicial procedures.  If officials know they will be caught and held accountable for corrupt actions, they will be less likely to make bad decisions.

Ambassador Delawie: That’s great! That leaves us with one more. It might be the most difficult piece, but it’s also what brings it all together. What can everyday people do about corruption?

USAID Mission Director Hope: December 5-9, organizations from across Kosovo will be providing their solutions to this problem during International Anti-Corruption Week.

Deputy Chief of Mission Hyland: We know people in Kosovo are really worried about this issue and ready to take action.

Ambassador Delawie: Without you, the fight against corruption just doesn’t work. All of the training programs and new systems aren’t enough. What kind of future do you want for your country?  It’s up to you to join the conversation.