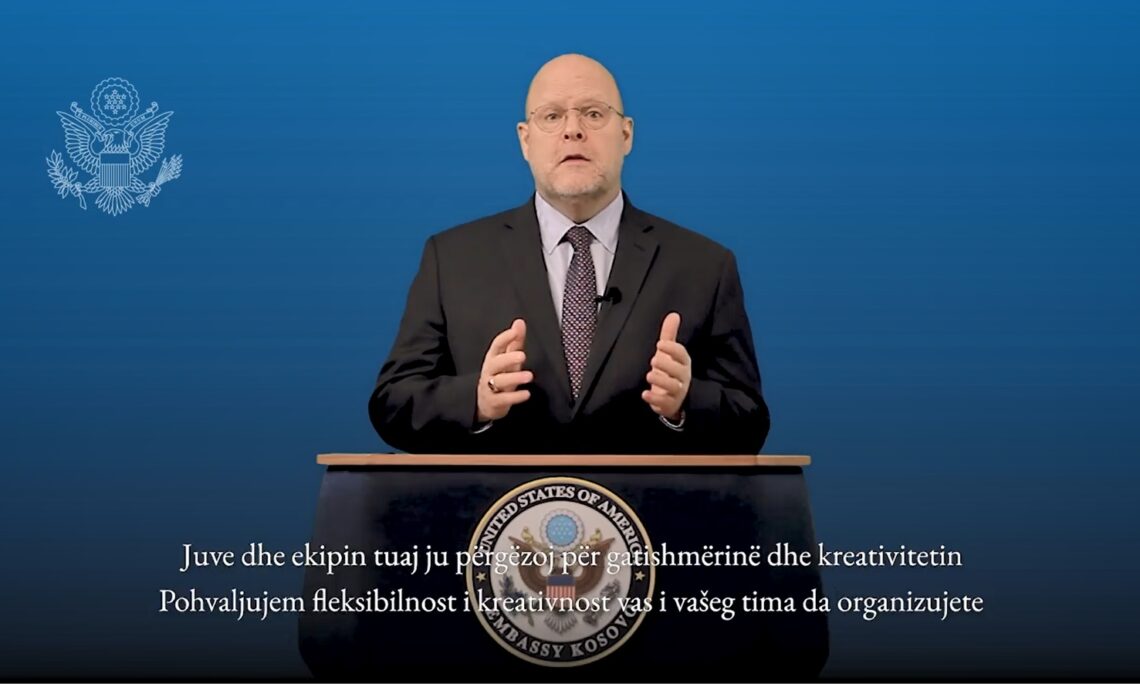 Chief Prosecutor Lumezi, thank you for the invitation and opportunity to speak today at the annual prosecutors’ conference.  I commend the flexibility and creativity of you and your team to host this conference using a combination of in-person and virtual platforms

To the prosecutors of the Republic of Kosovo – I want to start by thanking you for the commitment you have made to serve the public.   I’m honored to speak with you and share a few thoughts on the importance of your work and on our shared priorities.

As many of you may know, I have a long history working on Kosovo issues and representing U.S. strategic priorities in the region.

In the month since I arrived here, I have been encouraged to see how much progress the people of Kosovo have achieved in establishing a strong rule of law system.

You have also overhauled your internal discipline and performance appraisal systems, an important step toward creating a culture of accountability and professionalism.

But, work remains, especially in the fight against high-level corruption and organized crime.  Keeping corruption in check strengthens the rule of law by contributing to stability, human rights, and democracy.  It also promotes economic growth and levels the playing field for businesses.

Just as important, it makes it harder for those engaging in transnational crime, terrorism, and illegal trade to operate.  The public has put great faith in you, and I urge you to take all necessary steps, in coordination with the police, to advance the fight against corruption.

It requires high standards of conduct, professionalism, fairness, and neutrality.  Institutional indifference towards corruption is a breeding ground that allows corruption to grow.

As President Biden has said, “Fighting corruption is not just good governance.  It is self-defense.

It is patriotism, and it’s essential to the preservation of our democracy and our future.”

Corruption is a cancer that not only impoverishes everyday citizens but erodes citizens’ trust for democratic governments.  You must confront corruption head-on and dedicate the necessary resources to make a real difference.

As prosecutors, it is important that you serve as an example, setting the highest standards in all that you do, both in and out of court.

Right now, you have an important process coming up, selection of the next Chief State Prosecutor.  It is important that the Kosovo Prosecutorial Council conducts a fair, transparent, and merit-based selection process.

This will reinforce the public’s confidence in the next Chief State Prosecutor, as well as in the integrity of the selection process.  Taking these necessary steps will also further build public trust in the prosecutorial system.

I understand this afternoon you will also discuss another problem facing Kosovo, – domestic violence.

Some people, both here and in the United States, think that domestic violence is a private family matter and that neither the state nor law enforcement should interfere.  Nothing could be further from the truth.

I applaud the steps you have taken to tackle domestic violence more vigorously and to provide desperately needed services for victims.  However, as you are all aware, we have also seen instances of negligence and unprofessionalism that resulted in tragic consequences.  I challenge you to hold offenders, the system, and each other accountable.  By doing so, you communicate to the community that domestic violence will not be tolerated and that everyone will be held accountable.

I hope you will keep in mind that you – prosecutors – play a critical role in shaping the future of your country.  You have an enormous amount of control over life, liberty, and reputation.  I encourage you to always have your mandate in mind – to seek equal justice without fear or favor, affection, or ill-will.  Your mandate is not to get convictions at all costs or the longest prison sentence possible.  Rather, an ethical and effective prosecutor aims to seek justice and truth and serve the law.  If that is your guiding principle, then you can’t go wrong.

Lastly, I hope you will remember you are not alone in this fight.  Strengthening Kosovo’s rule of law and helping tackle some of the most pervasive problems, such as corruption, is one of the United States’ highest priorities in Kosovo.  My team will continue to support and assist you in your efforts to strengthen the rule of law.   I look forward to continuing and deepening this collaboration.