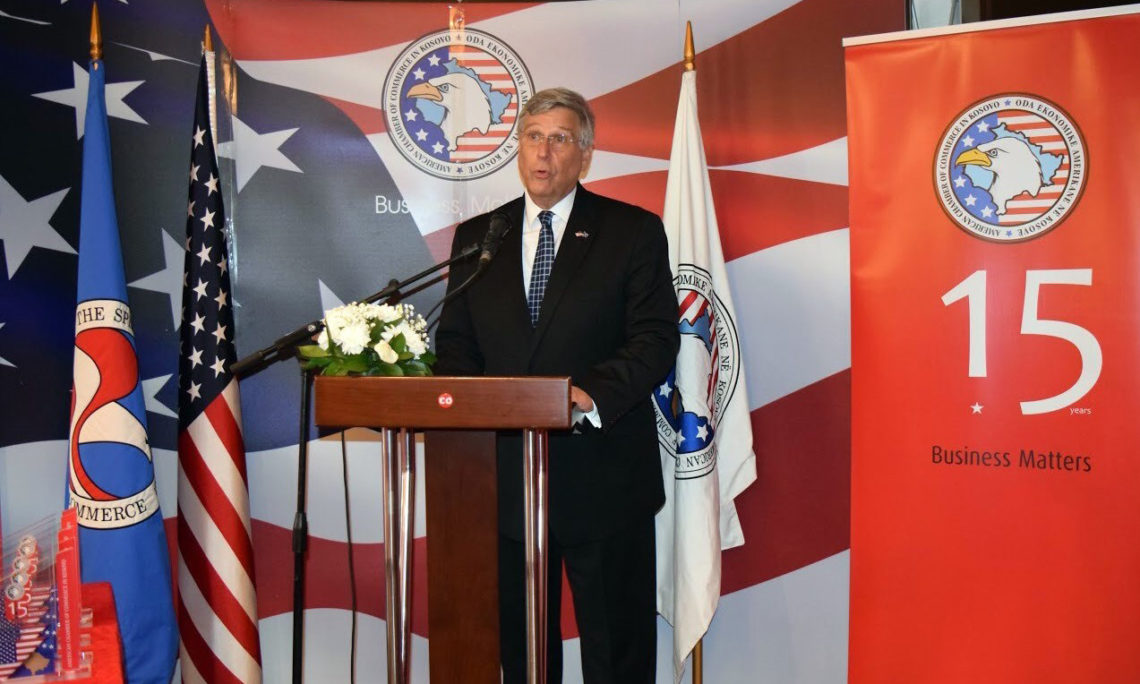 Good evening and thank you everyone. And thank you, Ilir, for that kind introduction. Ilir, Arian, Ladies and gentlemen – my wife Alison and I are pleased to be here with you all to celebrate the success of AmCham Kosovo member companies.

One of the duties of any U.S. Ambassador is to help American companies expand their business globally.  Such commercial diplomacy is important to America because it helps create jobs and prosperity at home and helps bring high quality products and services to the American market.  Promoting broad-based, responsible, and sustainable growth helps to stabilize regions, and creates new and growing markets for U.S. companies.

But we are here not only to support the United States. At the same time, the U.S. Government is committed to supporting Kosovo’s people, business community, and government to build prosperity for all Kosovo’s citizens, including minority communities.  We are committed to helping Kosovo build its private sector, and to continuing to partner with Kosovo’s institutions to set the country on the path to greater economic self-sufficiency.

I am reluctant to mention only some of the firms we are recognizing here tonight, but some of them have particularly stood out in strengthening the trade and investment links between Kosovo and America.

Elkos, Fluidi, Allmakers Global Services, Meridian Corporation, and Delfin were the most significant importers of American goods into Kosovo last year.  Stone Castle and Devolli are having increasing success at exporting to the United States wine and coffee, respectively – two products for which the citizens of America and Kosovo have potentially unlimited appetites.

But before we hand out the awards, I’d like to talk about some of the challenges Kosovo’s economy faces.  I say this while asking that you please bear with me – because I know we talk about Kosovo’s challenges all the time while what Kosovo really needs is action.

Right now, growth is hovering around 4 percent.  That may sound impressive, but Kosovo produces per capita only about a tenth of the European average.  That means that in order to catch up with growth in Europe, Kosovo’s economy must grow 8 percent a year for the next 30 years.  Kosovo needs private-sector expansion to meet that goal, and the government needs to get serious about supporting the private sector.  It is important that whatever the shape of Kosovo’s next government, that next government must be committed to concrete action to increase the flexibility and competitiveness of Kosovo’s private sector.  For business to thrive, the government must decrease corruption and promote professional standards in government, business, and education.

Economic growth also depends on cross border trade and economic integration, and here as well government has a leading role to play.  Kosovo is a good example of a country with a small domestic market that cannot rely on local consumption alone to drive growth.

The unresolved conflict with Serbia contributes to a perception among potential investors of insecurity and unpredictability which results in higher transportation and logistics costs, lack of executive mobility, and difficulty forming cross border alliances.

Ladies and gentlemen, reaching a comprehensive agreement with Serbia would be transformative for Kosovo’s economy and for all of your businesses, because it would enable Kosovo to fully capitalize on one of its most important comparative advantages – its access to the European market.  Government alone cannot bring competitiveness and prosperity to Kosovo.  Business has a role to play too.  As models of private sector success, the AmCham Kosovo companies can play a significant role in accelerating economic growth.

As business leaders, you know that the most successful businesses are not those that imitate, they are the ones that innovate.  Kosovo needs more “gazelles” – a fancy term for companies that innovate, grow fast, and create jobs, and – frequently, are aggressive about moving into international as well as domestic markets.

I am going to give you two examples, one from Kosovo and one from the region.  In 1991, the Government of Slovenia established a national Gazelle project to promote boldness, innovation, and international success for Slovenian companies.

The Slovenian Government launched the initiative by consulting widely and then enacting reforms and legislation necessary to build a business environment that proactively supported business innovators.  The government concentrated investment promotion activities in one agency responsible for marketing special investment incentives and established cost-sharing schemes designed to attract serious investors to projects that build on Slovenia’s comparative advantages. These comparative advantages are: a well-developed infrastructure, low supply chain costs, and clusters of specialized suppliers.

One company that was able to capitalize on these initiatives and expand into new markets was Mebor.  This family-owned wood processing company established in 1982 set its sights on growing by expanding exports, starting with the Croatian and Austrian markets.  To compete internationally, Mebor needed to invest in new production technology, which it did.  So, the result was that over the past five years, Mebor doubled its sales revenue to almost €12 million.

Companies in Kosovo have been successful in the same fashion. “Gazelles” know that people are the key to executing strategy.  In Kosovo, the food distributor Meridian develops talent through partnerships with several private universities and high schools that it uses to identify, attract, and hire ambitious entry-level workers.  In addition, Meridian participates in an after-school support program called ASSET, which is funded by USAID, that offers high school students a chance to supplement their studies with real work experience.  Meridian also invests in grooming its future corporate leaders by selecting staff with career potential and sending them to a Certified Management Program.

I could offer more examples – but this is an awards show, not a seminar, so we should get on to the business at hand.  I want to again offer my congratulations to the award recipients, and my thanks to AmCham and all its members, for all you do to strengthen the ties between Kosovo and the United States.