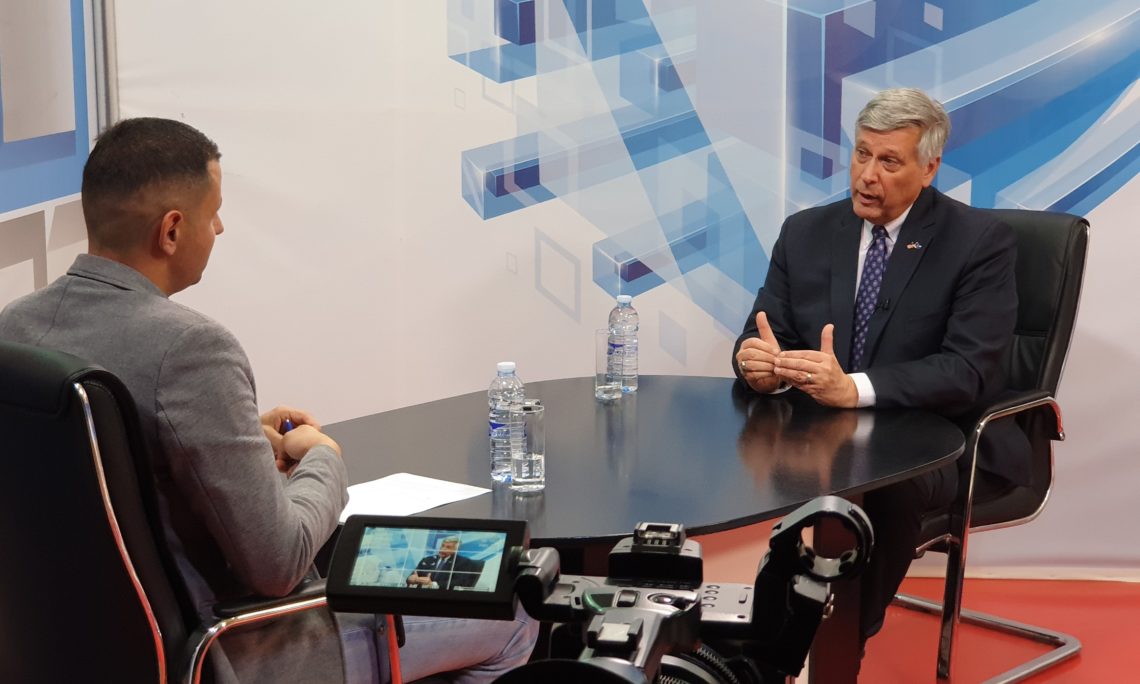 TV Puls: Good evening, dear viewers. This is open studio of Radio Television Puls. It is my pleasure to welcome our guest, his excellency, the Ambassador of the U.S. IN Kosovo, Mr. Philip Kosnett.

Ambassador: Thank you Milos, it’s a great pleasure to be here in Novobrdo today.

TV Puls: One more time, good evening and welcome. You have visited Novobrdo for the first time during your career in Pristina and met people in this part of Kosovo. What was the purpose of your visit and can you share your impressions with our audience?

Ambassador: Well, I think in any country it’s important for diplomats to get outside the capital, travel around, and listen to the ideas and concerns of ordinary citizens. So, my wife Alison and I came here today to Novobrdo to do just that – to talk to ordinary people and find out, not what just problems they have, but what opportunities they see for the future of their community here in Kosovo.

TV Puls: So, if I can ask, who did you talk to in Novobdrdo and what were the topics?

Ambassador: First we went to Bostane, to the church there, and met with Father Stevo and members of his congregation, you know, people, farmers, workers, and later on we went to the amazing musical school in Stanisor, and I think my wife and I just fell in love with the school and with the kids there. And, I have to say that, being at the music school is a reminder that Kosovo, like the United States, must be a multicultural, multiethnic society. The cultural richness that the Serb community brings to this country is truly extraordinary, and I told the parents and the teachers at the school that they’re all heroes, just for living in Kosovo, living their lives, giving their children a future here.

TV Puls: All right. And, beside local issues, I would like to tackle also some broader issues. After nomination of the U.S. Special Envoy Matthew Palmer for Western Balkans, and Richard Grenell for Pristina-Belgrade relations, there is an impression that the U.S. is ready to engage more on resolving the issue in this part of Europe. So, how do you see this initiative?

Ambassador: I think that’s right, Milos. The Trump administration has shown that we are deeply committed to supporting our friends throughout the Western Balkans in building a future of peace, justice and prosperity for everyone. And, President Trump last year – as people know – wrote a letter to President Thaci and President Vucic to underscore our commitment to that. And, the fact that we have now appointed two special envoys, one working at the White House, Rick Grenell, and one with the State Department, Matt Palmer, is a concrete indication of our seriousness in helping the governments in Kosovo and Serbia to find a way back to the negotiating table, to create a comprehensive and lasting peace.

TV Puls: Early election, or the elections for the Assembly of Kosovo, were held last month. We are still waiting for the final results, but what is your comment on voting process in general?

Ambassador: Well, I think the results make clear that people in Kosovo want change, all the people of Kosovo. They want a better future for their children, you know. Many of the problems that the Serb community here face are the same ones that the majority community face: lack of economic opportunity, lack of jobs, deficiencies in the education sector. So, I think that all the people of Kosovo together want to find a way ahead.

TV Puls: But, how do you comment Serb community participation at the elections and preliminary results?

Ambassador: Well, I think, as you said, the voting is still going on, there have been various legal challenges, and so on. I think I will wait until the final results to comment specifically on that. I will say that I had been meting with leaders of all the political parties, both those that are likely to be in the new government and those that are likely to be in the opposition, to emphasize two points. One, as I said earlier, The United States is committed to supporting the people of Kosovo and the neighboring countries in building a better future. And two, it is our hope that everybody will act constructively. You know, even parties that are in opposition have an important role in creating an atmosphere that is a positive one for the resumption of the dialogue talks with Serbia. And, we hope that the dialogue will resume quite quickly.

TV Puls: By all account, we could expect new Kosovo government in the next month or, let’s say, two. What is the perspective of Kosovo and the whole Western Balkans in the future?

Ambassador: You know, I’m an optimist. I believe that it’s clear that the people of Kosovo, and the people of Serbia are dissatisfied with the current situation. We talk a lot at the U.S. Embassy about the importance of economic development in Kosovo, the importance of fighting corruption, of establishing justice for everybody, no matter what community they are. I think people of Kosovo are ready for change, and I also believe that it is not possible to speak of justice, and prosperity, and peace separately. These three goals are closely interconnected, and improved relations between Kosovo and Serbia will open the door to greater prosperity and greater justice in both countries.

TV Puls: Your excellency, thank you for speaking to Radio Television Puls.