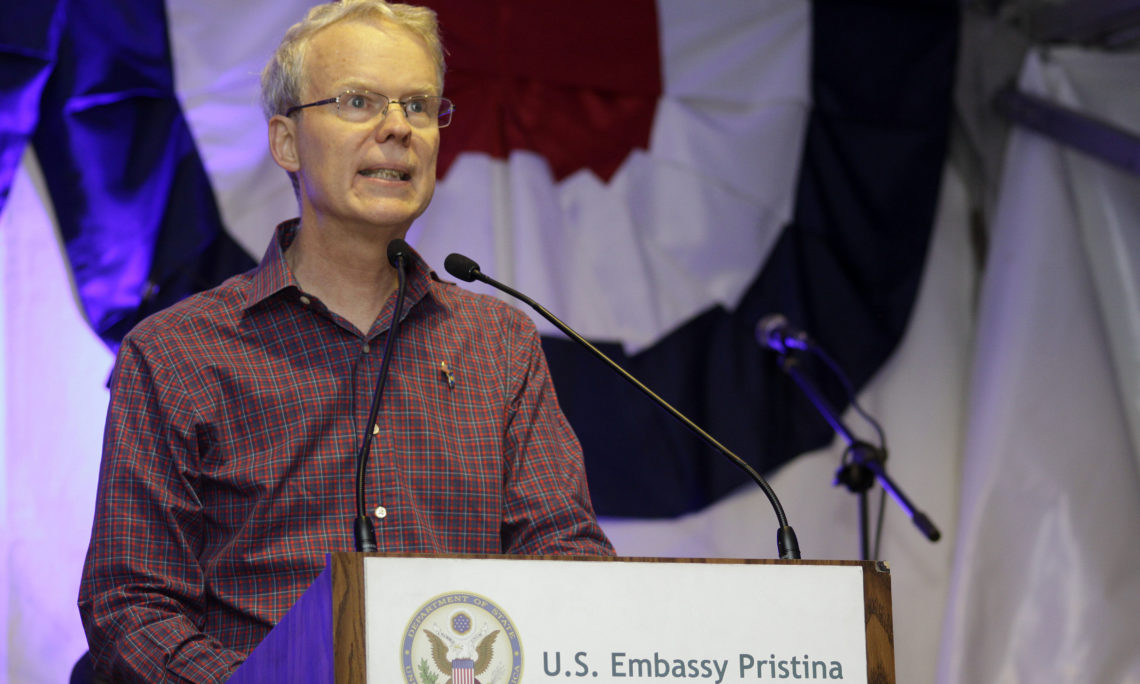 The great American tradition of the state fair is our theme this year, and specifically, the famous Iowa State Fair, in honor of Kosovo’s Iowa National Guard and sister state partnerships.  The Iowa State Fair was first held in October 1854.  State fairs celebrate both America’s modern high-tech agricultural economy and nostalgia for our old traditions, along with friendly competitions, music and entertainment.  State fairs are places where every segment of society stands shoulder to shoulder as equals.  They are a place where citizens and politicians meet each other face to face, and talk frankly about issues that matter.  We hope to bring some of that spirit here tonight.

And in that spirit, I’d like to thank the many people who have helped us to put this Independence Day celebration together, especially our sponsors.  I truly hope that you will enjoy this evening.

As we commemorate our 242nd year of independence, we also celebrate our special partnership with Kosovo that deepens with each passing year.  When we celebrated Kosovo’s 10th anniversary earlier this year, it was an occasion to reflect on the impressive progress made in your first decade of statehood, working alongside partners and friends, many of whom are here tonight.

Step by step, Kosovo is building a forward-looking, multi-ethnic society and a stronger economy.  As in any democracy, the work is ongoing.  Nelson Mandela once said “After climbing a great hill, one only finds that there are many more hills to climb.”  This is the challenge and privilege of any young country.  Right now, in Kosovo, there are some big hills to climb.

Let me address two of them: Dialogue and Public Trust.  Our celebration tonight comes at an urgent moment.  This year is the year that Kosovo must overcome its differences with Serbia and negotiate a final Dialogue agreement.

We know this hill is steep, but there’s no other way to open Kosovo’s path into full membership in the Western community.  Let me be very candid with you tonight about why this is important.  The Republic of Kosovo has for too long been burdened by the asterisk.

Kosovo pays a price every day, every month, every year for the deeply frustrating fact that your sovereignty and independence are not yet universally acknowledged.  These costs are economic and commercial, political and social.  I’m as frustrated as I know all of you are by this hard reality, but the fact is that you pay this price.

You pay this price when foreign companies skip over investing in a country whose legitimacy is disputed.  You bear the cost of what international businesses call “political risk.”  You pay a price because Kosovo has no voice in so many of the international bodies and agencies that regulate the global system, or in so many key European institutions.  Too many countries, companies, and international institutions look at Kosovo, and all they see are questions about your divorce from Serbia, and the political, economic, and security risks that come with it.

This price is a heavy burden that slows Kosovo’s economic development.  And that’s before we even get to the fact that Kosovo will not be able to join the EU or NATO until you achieve normalization with Serbia.  The long-term costs of that barrier are truly incalculable.  This is the heavy burden of the asterisk that Kosovo still carries.

So, where does this leave you?  For me, it means you have no real choice but to negotiate a final resolution of your relationship with Serbia, and the sooner the better.  Right now, in 2018.  The discussion must move past whether there will be an agreement and reasons “why not” to negotiate.  Real leadership means focusing on how you find a way toward accomplishing your goals.  There is growing momentum and genuine seriousness about finally achieving Kosovo-Serbia normalization.  The EU has stressed for entry into the European Union, the two countries must strike a deal.  That’s the best negotiating leverage Kosovo is ever going to get.  But the European Union has elections in 2019, and no one can say what the next generation of EU leaders will do.  It’s time now for Kosovo to come together with a sense of unity and national purpose for a final Dialogue push.

At the same time, there is another hill for Kosovo to climb: Fighting corruption and improving Public Trust.  Public officials in a democracy have an obligation to be accountable to the people, who pay their salaries, and to put their country first, above personal or political interests.  This goes for all public officials, municipal and state, from police officers to prosecutors, judges, government officials, and assembly members.  A culture that places the country’s interests above personal gain and a systemic, sustained fight against corruption are essential for everything that Kosovo hopes to accomplish.  On critical issues like unemployment, education, energy security and so many others, Kosovo must be a place where merit matters above all else, where a transparent, stable business environment attracts and rewards investment, and where young people believe they have a fair chance to make something of themselves and the education to succeed.

I believe this is possible, because after three years here, I know Kosovo to be a country of great resilience, of creativity, and of courage.  I see it every day, meeting with students, farmers and young entrepreneurs, witnessing the enormous talent and potential of a young nation, ready to break out.

Tackle the challenges ahead and Kosovo can achieve its goals of building a diversified and dynamic economy; of developing productive, peaceful relationships with its neighbors; and as its Constitution says “to build a future of Kosovo as a free, democratic and peace-loving country that will be a homeland to all of its citizens.”

The United States will be by your side as you take on these challenges.  Tonight, as we celebrate our Independence Day, we celebrate our friendship with Kosovo as well, and our shared commitment to building a world where democracies can thrive.