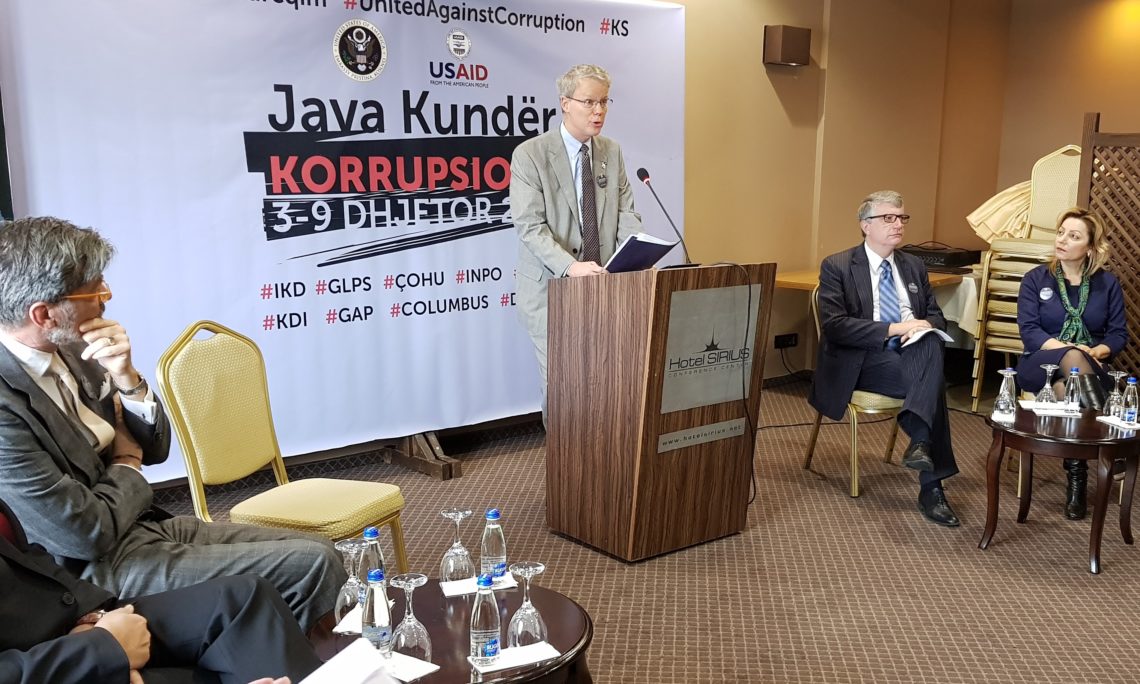 Good morning.  Thank you all for joining us as we kick off Anti-Corruption Week.  I often say that fighting corruption and strengthening rule of law are my highest priorities for my time in Kosovo.  And as you can see, I’m not alone.  All of us from the diplomatic community, international institutions, and NGOs are here united behind a shared commitment to fighting corruption for the sake of Kosovo’s future.

Defeating corruption is a long-term challenge for Kosovo, but meeting that challenge requires taking action now.  That’s why Anti-Corruption Week is so important.  Led by Kosovo civil society, many of us who work to end corruption are here to raise our voices, to propose ideas, and to demand action.

I’m inspired to see so many Kosovo citizens from across the country here today.  The international community has an important role to play in suggesting solutions and pushing for change, but in the end, this fight is yours to lead.  You are the ones who have sacrificed so much to make Kosovo what it is today, and you are the ones who will make this country’s leaders live up to the standard that you have set.

I want to emphasize one action that I believe is particularly vital:  It’s time to pass the updated Law on Disciplinary Counsel.  This will be a critical step forward in strengthening checks, balances, and accountability in Kosovo’s justice system.  Ensuring that judicial sector personnel are held to the highest standards of discipline and accountability is crucial to build public trust in these institutions.

This law, on discipline and conduct in the judiciary, and its companion reforms are the result of hard work on the part of committed public servants, the international community, and Kosovo civil society.  Let’s move it forward without changes or delays.  The law should be ready to go before the end of the year, and I hope the Assembly needs to enact it at the earliest opportunity.

As dry as it may sound, public procurement reform is another vital step in conquering corruption.  Over 40 percent of Kosovo’s budget goes through public procurement.  Corruption in this area has far-reaching consequences, undermining economic investment, local service delivery, access to health care, and education.  The government has made some encouraging progress on reform, but Kosovo’s citizens deserve more.  Let’s make sure that the move to electronic procurement across government is complete by January 2018.

The U.S. government, through USAID and other agencies, will continue to support the government on procurement reform, judicial reform, and a host of other efforts to fight corruption.  But a broader and stronger commitment, from the municipal level to the highest seats of power, is absolutely essential.

Thank you again for joining me here today, and for what you do on all the other days to fight corruption.  I’m looking forward to hearing your ideas and working together throughout this week to make Kosovo a better place to work, to invest, to live, now and in the future.