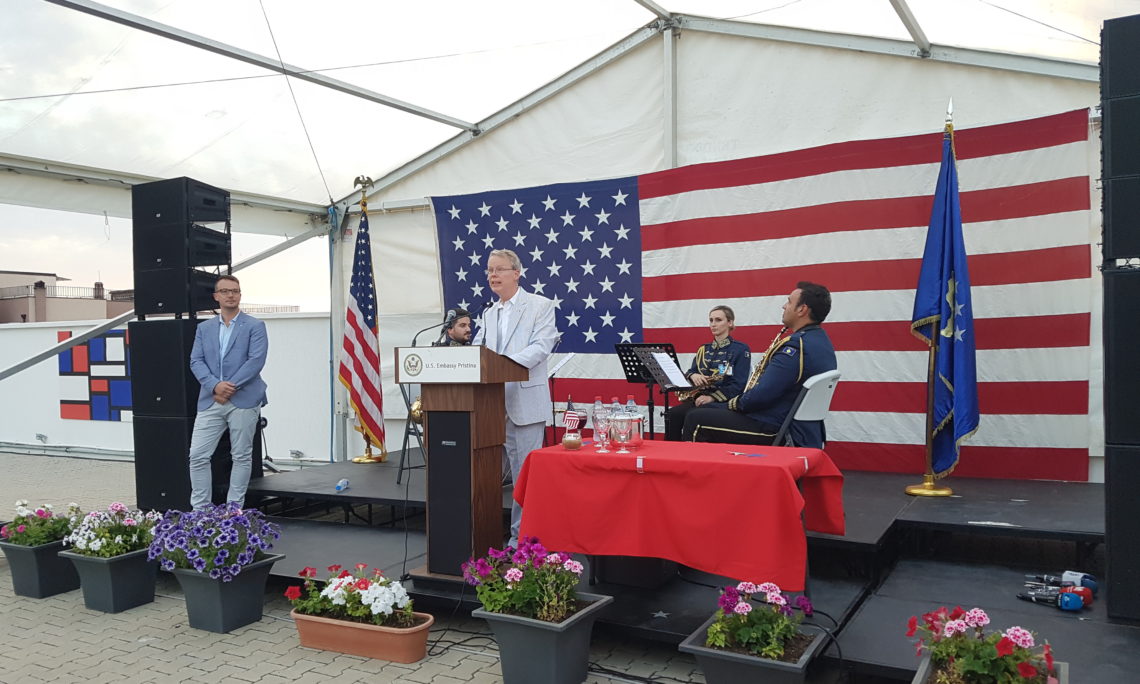 Mirembrema; Dobra vecer; Good evening, and happy Independence Day to you all!

It is my pleasure to host all of you tonight for our Northeastern Beach Party, but I want to give a special welcome to Adjutant General of the Iowa National Guard Major General Timothy Orr, Iowa Secretary of Agriculture Bill Northey, and the rest of the Iowa delegation—from economic development to higher education—who are joining us this evening.  Thanks to all the Iowans for coming from their beach to ours.  It’s great to see the Sister State and State Partnership relationships between Iowa and Kosovo continuing to expand.

Tonight is a chance for celebration—celebration of the 241st anniversary of the United States’ Declaration of Independence, and our government’s 21st such celebration here in Kosovo.  I think it’s appropriate to start the evening with a toast— From our past to our future, here’s to the enduring friendship and partnership of the United States of America and the Republic of Kosovo, and to what we can accomplish together for the common good of our two nations.  Gëzuar!  Živeli!  Cheers!

There is no doubt that Kosovo has come a long way over these 21 years; the progress is undeniable.  But I think it’s clear that some of the early enthusiasm has waned.  We are seeing more stalemate and less progress.  Too many people are more concerned with protecting their own political futures rather than their country’s future.  Kosovo’s citizens see this too.  Some show their unhappiness by emigrating abroad.  Others expressed frustration by turning in “spoiled ballots” in the recent election.

I believe that today Kosovo is at a turning point. As we look to the future, what will we see?  More positive change or more stagnation?  In the next year, will this country make progress, moving forward on its path to Euro-Atlantic integration and improving the lives of its citizens—or will it stay put?  I think the choice and its outcome will be determined in no small measure by the people here tonight.

There was also a crucial turning point in the United States, 11 years after our Declaration of Independence.  And interestingly enough, it also involved the creation of a new government.  In the wilting summer heat of 1787, as our Founding Fathers debated the structures of a new Constitutional government, there was one issue that seemed insurmountable—the question of representation.  How would each voter and each state be represented in the new government?  Would it be based on population or equal representation of the states?  There was no consensus, and the deadlock threatened to destroy the entire effort to craft a new Constitution.  Things seemed hopeless until two colleagues, Roger Sherman and Oliver Ellsworth, came forward with a radical solution—a two-chamber, or bi-cameral, system: one elected according to a state’s population – the House of Representatives– and one where each state would have equal representation, the Senate.  This idea came to be known as “The Great Compromise”—the first major turning point in our Constitution’s history.

The Great Compromise is an important lesson for leaders today, especially as Kosovo begins to form its new government.  The international levers that have supported Kosovo’s decision-making in the past are not as active as they used to be.  The world is distracted; many countries are preoccupied with internal issues.  All eyes are not on the Balkans now.  We are counting more and more on you to make your own decisions, and to accept responsibility for them.

In the past, Kosovo drew the world’s attention for negative reasons:  war, violence, retaliation, corruption.  Today, Kosovo needs to win the world’s attention in a positive sense; by demonstrating with its actions that it is living according to the Euro-Atlantic values of the clubs it aspires to join.  Kosovo’s leaders need to demonstrate this, and they need to persuade their citizens to support them.

In a democracy such as ours and yours, there should be no doubt who all of those leaders work for—not for a party, not for a region, not for a relative, but for the best interests of the country.  For me, this is the enduring legacy of the Great Compromise:  Leaders coming together at a turning point in the nation’s history; putting aside personal and partisan interests to find a solution for the greater good. These leaders recognized that they had a bigger responsibility: to all the people of the United States.  As Roger Sherman said, “Government is instituted for those who live under it.”

Over the past 21 years, the United States has witnessed great progress in your country—countless moments where the government and the citizens came together to make the right decisions for Kosovo’s path forward.  But we have also witnessed stalemate and stagnation—times where politics and ulterior motives prevented progress instead of supporting it.  At this turning point, we don’t have any more time for stalemate; it is time for progress.  That is what Kosovo’s people want, and it is what they deserve.

As we celebrate our 21st Independence Day together, I hope we can all agree—from the government to the opposition, and from the farmer to the civil servant– Kosovo cannot afford to waste any more time or energy staying in the same place.  It needs to turn decisively toward the future and impress the world with its progress.  It needs to establish a rule of law system that guarantees equal protection and equal accountability for all.  It has already demonstrated it can run western-style elections; now it needs to demonstrate it can be governed in the same style.

After 21 years, the United States of America remains committed to progress in Kosovo.  We remain committed to Kosovo as a sovereign, democratic, multi-ethnic state at peace with its neighbors and fully integrated into the global community.  We will be happy to work with those who share these values.  My hope is that we will see leaders—government and opposition– who demonstrate the same commitment.  Leaders who demonstrate the value of compromise for the sake of resolution, and collaboration for the sake of shared progress.  Leaders with the vision and the determination to create Kosovo’s future as a normal European democracy.

Faleminderit; Hvala; Thank you all for being here and for celebrating with us.