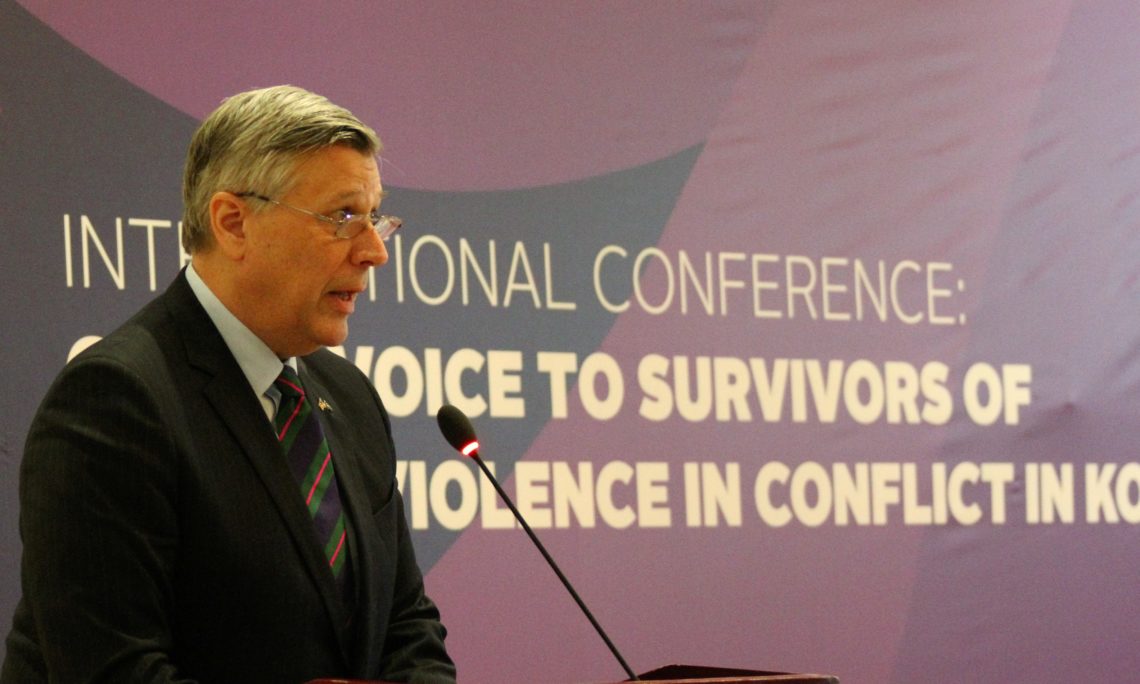 It is an honor to be here to speak on a topic that deserves more attention – here and in all our countries – as Kosovo and its neighbors continue to grapple with their wartime past.  Today’s conference calls to mind a quotation that is close to my heart, from the 19th Century American civil rights activist Ida Wells.  Ida Wells said: “the way to right wrongs is to turn the light of truth upon them.”

So I have immense respect and admiration for the survivors who have come forward and shown us how support from families, communities, and the government can help victims begin to rebuild their lives.  As President Jahjaga said, Vasfije Krasniqi Goodman, who came forward as a survivor last year, is one such heroine.

Empowering survivors doesn’t only help them and their families, it also does something vital for Kosovo and its neighbors: it reduces social stigma and creates space for an honest public conversation about the war, and how to deal with the past.  Such a conversation must make room for the voices and perspectives of victims from all communities.

For acknowledging historical truth is the first step in grappling with legacies of violence.  The Prime Minister noted the value of learning the experience of other countries and Ambassador Heldt has given us a very powerful witness of Germany’s experience.  In America as well, acknowledging historical truth has been the first step in grappling with our legacy of violence.  In centuries past, in the United States, organized campaigns of politically motivated violence – lynchings, rape, arson – were supported by local power structures to suppress the rights of African-Americans and other minorities.  That horrific legacy still stains our politics and challenges our sense of national unity.

Now, in the 21st century, we are beginning to acknowledge and to learn from our past.  Institutions like the Smithsonian Museum of African-American History and Culture in Washington, and the Equal Justice Initiative in Montgomery, Alabama, are, as Ida Wells said over a century ago, turning the light of truth upon our past.  As Americans, we don’t have all the answers to how to build a just society, but we are getting better at asking the questions.

I am pleased to say that Kosovo is not waiting so long to confront its own past.  Kosovo has made real progress in creating a safer environment for victims to come forward, and in making vital services and resources available to them when they do.  That success is largely due to the people in this room, with support from many of Kosovo’s political leaders.  President Jahjaga and others – including our International Woman of Courage, Feride Rushiti – are leading the way in dealing proactively and responsibly with the legacy of war.

But I want to note two areas in which I believe politicians need to change their approach.

First, ensuring equal access to justice and services for victims of wartime sexual violence from minority communities.  There seems to be a sense among some leaders that doing so would imply a sense of moral equivalence between state-sanctioned atrocities during the wartime period, and other crimes committed during and afterwards.  I must disagree – for there to be an honest accounting of the past, compassion and support must be extended to all victims.

Extending services, including pensions, to minority communities acknowledges that victims, no matter where they live or what language they speak, face the same challenges and require the same support.

Second, on this International Women’s Day, I would like to ask that the same attention being paid to victims of wartime atrocities be shown to today’s victims of crimes against women, including victims of domestic violence.  They also deserve justice and services – and the opportunity to be heard.

In closing, I offer my gratitude and respect to all the courageous women who have made this conference possible.  For in the words of another American hero, Martin Luther King, “Our lives begin to end the day we become silent about things that matter.”

Thank you for your attention.