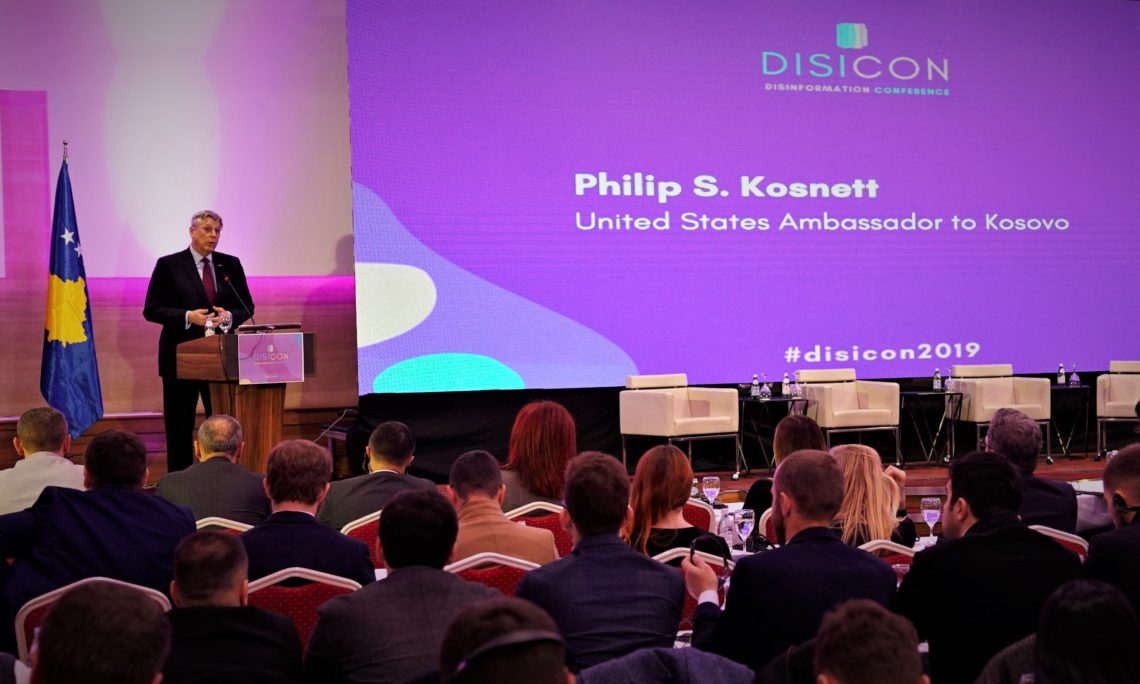 Thank you for that kind introduction, Shari, and my thanks as well to Alex Chavarria and his team at NDI for organizing the conference this morning. Ladies and gentlemen – good morning.  It is a privilege to be here to talk about the role we can all play in countering disinformation in the modern age.

There is an adage, dating back to the days of the telegraph and steamship, that “A lie travels halfway around the world while the truth is still putting on its shoes.”  If that was the case a hundred years ago, it is certainly true now, where any individual with a smartphone, an internet connection, and a story to tell – true or false – can attract a huge audience.

And we don’t just read stories, true and false, we amplify them: we like, we forward, we share, and we retweet. We are soldiers in the information wars, and much of the time we don’t really know who we are fighting for and whether the information we are amplifying is reliable or a fabrication. It just sounds appealing; it fits our worldview and preconceived ideas, so we spread the word.

I’ll offer some thoughts on how we can protect ourselves and our societies, from disinformation. How we can all become part of the solution instead of part of the problem.  But first allow me to put the problem in the context of information in the modern age.

The ways in which we absorb information have dramatically changed in recent decades. When I was growing up in the United States in the 1960s and ‘70s, there were thousands of local newspapers—locally owned newspapers—but except for a few big city papers like the New York Times and the Chicago Tribune, most focused on local stories. Books and magazines offered a vast range of ideas, but not convenience and immediacy. So, for national and international news, most Americans relied on television.

This was before 24-hour news networks, let alone the internet.  Three American television networks – CBS, NBC, ABC – each broadcast a single 30-minute evening news program.  So to a great extent the editors of those three news shows decided what news mattered when they chose the stories to squeeze into that 30 minutes. This wasn’t disinformation; this was honest editorial decision-making.  But they were still filtering the news.

The limited number of key outlets didn’t mean we all reacted to the news identically. Scholars who studied the influence of American media coverage of the Vietnam War observed that older viewers tended to pay more attention to the words they were hearing – often presidents and generals saying the war was going well.  Young people tended to be more influenced by the images of death and chaos on the TV each night.  This differentiation of perception contributed to a “generation gap” in attitudes toward the war, trust in government, and other political and social issues.

Now, I’m going to echo some of the themes that Shari touched on. The internet has given rise to a vast, increasingly fragmented media landscape.  Even in a small country like Kosovo, there are numerous TV stations, newspapers, websites, and personal blogs. We can all get information on demand from an endless number of internet and satellite TV sources, all of which have global reach.  Many of you are on your phones right now, ignoring my speech and reading other news.

There are certainly positive aspects to this proliferation – more voices, more freedom, less opportunity for a few media owners to dominate the information landscape.  But I’m not sure this multiplication of sources has improved the quality of information.

First, many of these poorly funded online news portals don’t have the staff, the money, or the will to meet professional journalistic standards, scrupulously checking information before they disseminate it.  They hear a rumor, read something that sounds good—boom, up on the site.

Another negative effect of this multiplicity of sources is fragmentation:  people find a few news sources and stick to those that reflect their existing views, rather than venturing out into the information jungle to seek out fresh ideas.  Media technology firms know this, and they tailor the news and advertisements we see online to our digital footprints. This further narrows the information we see.

So those challenges – of amateurism, of fragmentation, of the different ways we absorb information – make it hard to agree on what to believe. If we are arguing at the coffeeshop or at the kitchen table about what to believe, it’s harder to discuss constructively how we should act, who we should vote for – how we can do our bit to try to build a better future.

Which brings me to the challenge of disinformation.

What is disinformation?  We’ve already heard one or two definitions. Here’s one more, “false information intended to mislead, especially propaganda issued by a government organization to a rival power or the media.”  I’d underscore that disinformation doesn’t only come from governments: it can come from anywhere.   But governments are the most powerful practitioners of disinformation.

We can think of disinformation as a weapon, an offensive weapon – used to confuse and weaken an adversary, often to confuse and weaken political opposition. Authoritarian states frequently lie not only to foreign rivals, but to their own people about how well the government is looking after them. For this to work, authoritarians also need a defensive weapon – a means of blocking truthful information from reaching the people.

Once, authoritarians could do this by banning local opposition newspapers and intercepting foreign news at the border. With the coming of radio and television, they tried limiting access. For example, for decades radios in North Korea could only be tuned to a few government channels, and with few other information sources people had no way of knowing about the greater prosperity and freedom in South Korea.  Some authoritarians have failed to restrict information, to their regret.  In contrast to North Korea, the communist leaders of East Germany failed to prevent their citizens from watching West German TV.  The East Germans learned their propaganda machinery could not compete with the truth being beamed into people’s living rooms each evening.  Remember what I said earlier about the power of images: to see through the lies of communism, East Germans didn’t even have to listen to the audio on West German news; they could see on their TV screens how ordinary citizens lived in the West, and see that ordinary citizens in the West led freer, more comfortable lives.

Those images, as much as any political or economic factor, shattered the foundations of the Berlin Wall – and cleared the way for the fall of Soviet-style communism. In the words of President Ronald Reagan, “information is the oxygen of the modern age. It seeps through the walls topped by barbed wire; it wafts across the electrified borders.”

Today’s authoritarian governments have not forgotten. Some states have taken to banning satellite TV and constructing internet firewalls at the national level.  Citizens with satellite dishes and VPNs have found ways to break through these walls.  But when citizens in authoritarian states seek access to unrestricted information in this manner, they face the same challenges we all face: telling fact from fiction, and inaccurate information from outright lies.

So what can we do about all this?

In order to maintain an open and democratic system – where we are free to speak and express our own opinions, even if they are unpopular – government institutions, civil society, and media all have roles to play.

When I say government has a role in countering disinformation, I do not mean censorship, and I do not mean criminalizing free expression. Americans believe freedom of speech is critical to any democracy, even when speech is unpopular, even when speech is offensive. Government’s first duty is to be utterly scrupulous in disseminating accurate information.  Government should set the standard for accuracy.  As the writer George Orwell said, “In a time of deceit, telling the truth is a revolutionary act.”

To journalists—who’s a journalist? Raise your hand if you’re a journalist. To journalists I say, now more than ever we need you.  We need professional journalists who will do the hard work, the serious reporting and research to separate signal from noise and call out false information. Journalists—use your power to bring the work of independent fact-checking groups to larger audiences.

Finally, citizens can act.  First, we can all increase our own media literacy, so we can recognize and reject false and divisive narratives and hate speech, helping to make our communities more inclusive and less susceptible to disinformation.

Second, we can demand verifiable, truthful information.  We need to be more skeptical. When you read or watch a news report or an editorial commentary, do you ask yourself who wrote it?  Do you ask yourself who paid for it?  Do they have an agenda other than reporting the facts?  For that matter, why is the American Ambassador standing up here talking about disinformation? What’s his agenda—what’s his angle? The American agenda for Kosovo is straightforward—peace, justice, and prosperity.

You don’t need to accept U.S. intentions on blind faith.  You are always one Google search away from finding academics, analysts, pundits, politicians, and media outlets freely analyzing and criticizing my government’s program. I am confident our message, our program, can withstand scrutiny.  So, I encourage you to seek out that criticism and analysis, about your own government, as well as mine.  Public oversight is good for any democracy.

Third, when you are on social media, check the origin of stories before amplifying them: don’t just share everything that pushes your emotional buttons or that reflects your personal views.  This sort of discipline will have the potential to disrupt the ecosystem – and the funding models – that disinformation thrives on.

Finally – citizens—seek out a variety of viewpoints.  Next time you check the news, choose a different channel or website than you usually do. Try a source that you think of as having a completely different worldview than your own. Open your ears. Open your mind.  Because in the words of the South African writer and civil rights activist Nadine Gordimer: “Truth isn’t always beauty, but the hunger for it is.”

Thank you for your attention.