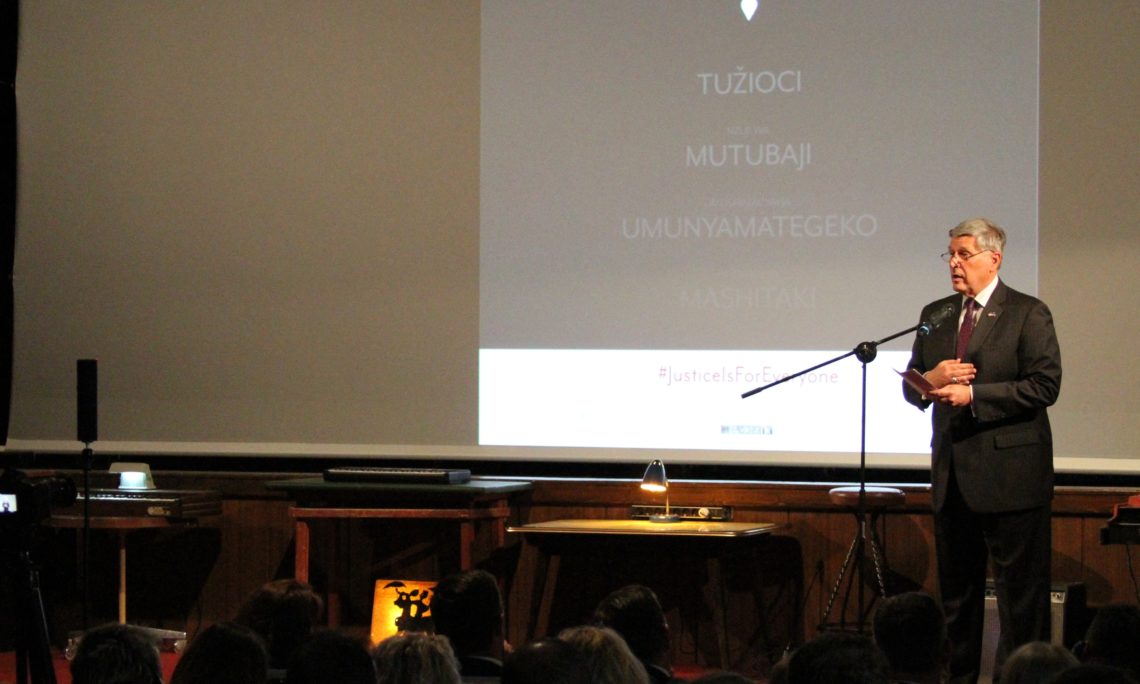 Ambassador Kosnett’s Remarks for Recognition of International Day for the Elimination of Sexual Violence in Conflict, and the Screening of the Documentary, “The Prosecutors”, June 19, 2019

Good evening, ladies and gentlemen. It is an honor to participate in marking the International Day to End Sexual Violence in Conflict. Let me begin by thanking Vlora Nushi and her staff at UN Women for organizing this event. It is a particular pleasure that Leslie Thomas – producer and director of “The Prosecutors” – will share her insights with us. And it is always a privilege to share the stage with my friends President Jahjaga, Ambassador Heldt, and Ambassador O’Connell – all of whom have done so much to highlight the struggle to secure a decent life for Kosovo’s survivors of sexual violence.

I choose not to call these brave survivors “victims” for they are not defined by victimhood. The survivors my wife Alison and I have met are among the most courageous people I know – for having the strength to endure, and to move forward with their lives. They don’t ask for much – safety, medical care, a small pension. And they also deserve justice.

The film we are about to see shows the role that prosecutors and others in the justice system, in different countries, play in amplifying the voices of the survivors of wartime sexual violence around the world. But there would be no prosecutions if it were not for the survivors who have come forward to tell their story.

In Kosovo, some survivors are now demonstrating the courage to speak out and seek justice and fair treatment for themselves and others, despite the heavy burdens that such truth-telling brings. But many others are unwilling to come forward. Such reluctance is understandable. Survivors are often judged harshly, even by family and friends. And they may ask whether there is a reason to further expose themselves if justice will not be pursued. So let us ask – what can be done to encourage survivors in Kosovo to come forward, and what will make it worthwhile?

First, I believe it is only with the communities’ help that the stigma associated with sexual violence will be removed. Local community leaders as well as neighbors in general need to stop averting their eyes from the survivors. As Mother Theresa said, “I alone cannot change the world, but I can cast a stone across the waters to create many ripples.”

At the central government level, I am pleased to say that Kosovo is beginning to make progress in creating a safer environment for survivors to come forward, and in making services and resources available to them when they do. This includes victim defenders, who provide an additional voice for the survivor in court. Indeed, Kosovo is leading the way in this region in its use of special advocates, providing voices to survivors.

That progress is largely due to strong female leadership and pressure from civil society. But more political support is required to keep moving in the right direction, including by increasing the budget for survivor services.

Kosovo is also taking some positive steps toward prosecuting cases where feasible. I am encouraged to see Kosovo training prosecutors to effectively advocate these cases.

But the hard truth is that after 20 years, some cases cannot be effectively prosecuted. Survivors are not blind to this, and are rightly wary of politically-driven initiatives that make unrealistic promises.

Finally, while some cases can be pursued domestically, we all know there is an international aspect to this effort. Some cases will require cooperation with authorities in neighboring countries – one reason among many for Kosovo and Serbia to accelerate progress toward normalized relations.

So we all have a great deal of work to do. The survivors deserve not just our compassion, but our commitment. As the American scholar and diplomat Benjamin Franklin said more than two centuries ago: “Justice will not be served until those who are unaffected are as outraged as those who are.”