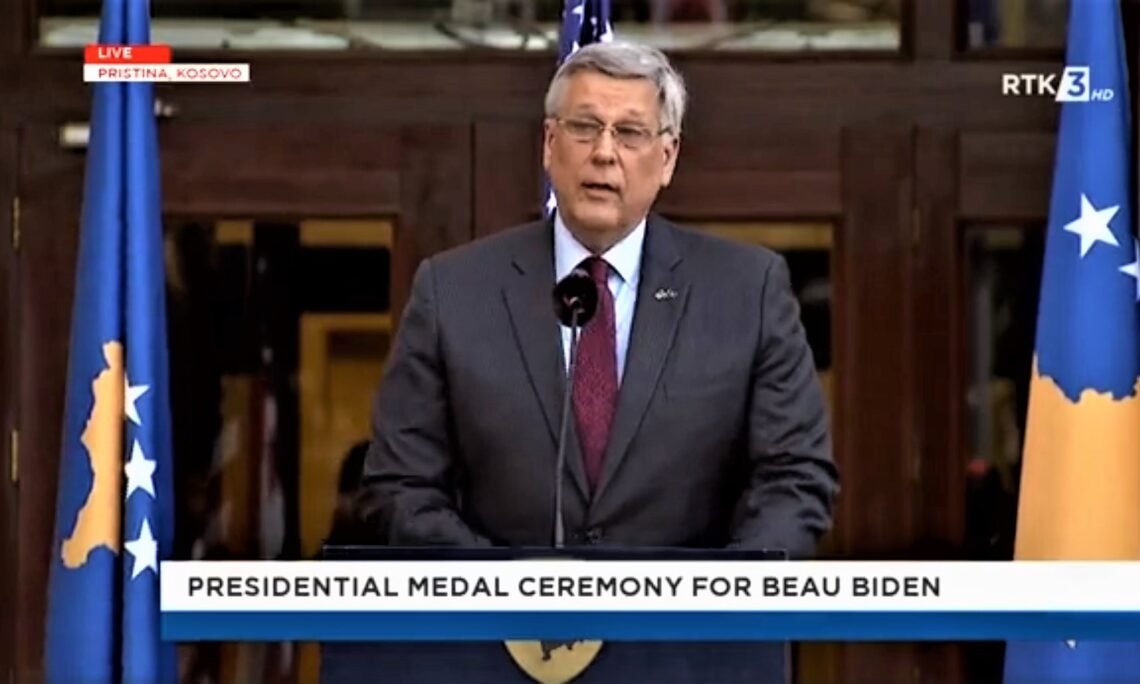 Madam President, Mr. President, distinguished guests, ladies and gentlemen.  It is truly an honor to be here with you all today, to accept this award on behalf of President Biden.

President Osmani – your remarks underscore the deep respect and affection that underpin the partnership between the United States and the Republic of Kosovo – just as President Biden’s heartfelt words capture how meaningful this award is, for him personally, for the Biden family, and for both countries.

Beau Biden represented the best America has to offer.  He knew that for America to prosper, Americans need to engage with the world.

That’s why so many thousands of Americans like Beau, some in combat boots and others in business suits, have served in Kosovo these past two decades.

They have worked alongside Kosovan friends to help establish and secure Kosovo’s freedom and independence; to move the country toward economic self-sufficiency and a market economy, and – like Beau – to support the people of Kosovo in building resilient institutions of governance, anchored in democratic values and respect for rule of law.

Americans appreciate and respect Kosovo’s journey – because we are on the same path.  Our common efforts to build societies based on equal opportunity and equal justice, respect for diversity and for the rights of the individual, have created a partnership that will long endure – and which can only evolve.

As President Biden said, Kosovo has made tremendous progress since I first served here nearly 20 years ago.  Kosovo has become more self-sufficient, more confident of its place in the world.  A rising generation of leaders – energetic, educated, dedicated to building a future here at home for their families and their communities – is lighting the path forward.

Americans are proud of the role we have played in supporting you. Citizens of Kosovo should take pride in your progress. And I know you are up to the continued challenge of building a society of peace, justice, prosperity, and equality for all.

I am also confident that in the years ahead, the friendship and trust between America and Kosovo will continue to strengthen, as this new generation of leaders takes the reins in every field, from governance and economics, to science and technology, to communication and the arts.  Where our relationship has been centered on U.S. assistance and the sharing of expertise, already we can see movement toward a partnership of equals based on mutual respect, common commitments, and shared values.

And now more than ever, it’s essential that democracies stand together to confront global threats – climate change, energy insecurity, terrorism and cyberterrorism, corruption, and the rising tide of authoritarianism.

So, Madam President, ladies and gentlemen, allow me to leave you with the thought that the best way for Kosovo to honor Beau Biden’s legacy is for all its citizens – from every community, from every political party, working in every field of endeavor – to keep striving to create what America’s founders called “a more perfect union.”  And America will be by your side every step along the way.