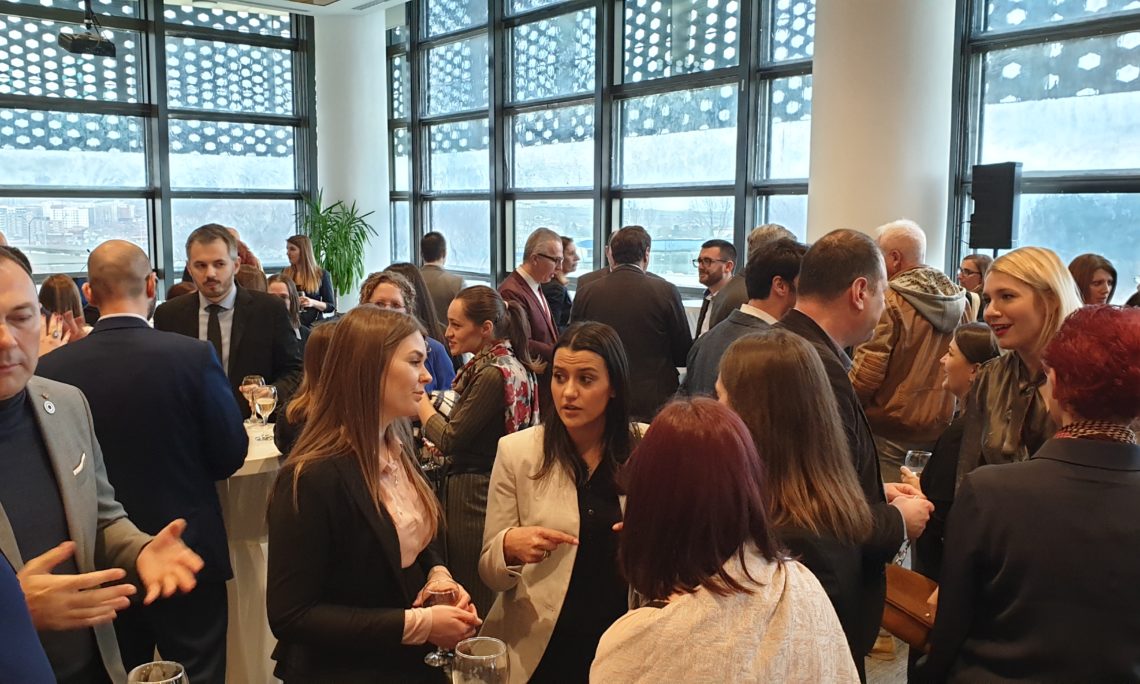 Good afternoon, ladies and gentlemen. Alison and I are pleased to welcome you here to mark the start of this new year.  For some of you this will be your first time joining us at our new Embassy, which we consider both a manifestation of America’s commitment to Kosovo and a gathering spot for people from all communities.

First, I believe the results on October 6 indicated that while Kosovo’s voters may be split about what parties they support, there is a great hunger for change: in particular, for progress on the economy, on education, on justice, that will create a path to a better future.  We’ve seen that hunger for progress as well in the high level of interest in the new U.S.-led initiative to reinvigorate economic cooperation between Kosovo and Serbia.  However the next government is structured, it is important that all the country’s political leaders – in opposition as well as in government – respect that strong public desire for fresh approaches.

Second, democracy is not a spectator sport.  For any democracy to function, its citizens need to do more than sit back and watch politicians compete.  For that matter, citizens should not think that their only option is to vote on election day every few years and then hope for a positive outcome.  They need to stay alert and involved, actively communicating their desires to their elected officials and politicians and holding them responsible for their actions and decisions.

Third, a robust civil society and independent media are critical to a thriving democracy.  Democratic societies must strengthen institutions and protect fundamental freedoms to ensure each citizen—regardless of gender, age, or ethnic background—has an equal opportunity to pursue a better future and an equal voice in the life of the country.

That’s what Americans are raised to believe in. Back when my grandparents emigrated to the U.S. a century ago, it was common to refer to America as a “melting pot.”  The theory was that immigrant communities would assimilate into the dominant American culture, leaving behind the cultures, languages, and even religions from their countries of origin.  Everyone would be welcome so long as they became “Americanized.”   By the time I attended school 50 years ago, that theory had been supplanted by the metaphor of America as a “salad bowl” where different cultural ingredients would be combined in a rich and flavorful creation.

Today, we see how each immigrant community enriches our culture and society.  It is natural for Americans – even after many generations – to honor their forebearers through culture and language. And keeping those traditions alive also helps America to maintain its active partnerships throughout the world, in business, academia, culture, security, diplomacy.   America thrives when we see diversity as a source of strength and wealth.

This would be a good time for me to note that Americans don’t claim to have all the answers to the question of how to build a more just society.   But we keep working toward this goal.  Let’s do it together.

Americans see Kosovo’s ethnic, cultural and linguistic diversity as important to the country’s identity and as a means of building a strong foundation for a future of peace, justice, and prosperity.  Respect for diversity is a fundamental element of America’s bond with Kosovo.   And I look forward to a day when everyone in Kosovo will move forward to see the country’s diversity in positive terms.   When those people who, at best, tolerate the presence of members of different communities come to see diversity as a source of strength and a source of pride.

For twenty years Americans have supported Kosovo on the path to equal opportunity and equal justice, including by investing in Kosovo’s civil society through grants, education and training, and exchange programs.

We do so because we believe a diverse, active, and above all courageous civil society is one of the pillars of a democratic society. But let’s be clear: all foreigners can do is help you develop the tools you need as a society to build a better future.

The majority community has work to do to create an environment of inclusion within institutions and society.  There are practical issues where Kosovo’s ministries and institutions need to do a better job.  I speak here of issues like providing equal access to employment in the public and private sectors; meeting the 10 percent employment quota for non-majority communities; respect for language rights.  Even small progress on these issues opens doors toward inclusion.

But the majority community alone cannot build Kosovo’s future.  So – how can minority community members help Kosovo to achieve the equality its constitution calls for?  As citizens of Kosovo, your role is critical to moving your society beyond toxic rhetoric spread by politicians who sometimes seem more interested in manipulating tensions for political advantage than in resolving them.  Some of you have faced pressure from government officials, media, and even your own communities because of your commitment to holding institutions and individuals in power accountable.  It takes courage and resilience to keep up the struggle, hope to believe change is possible.

Your fellow citizens need leaders – not only in government, but throughout society – who will model that courage and hope. They need people like you to advocate for their rights, to shed light on violations of basic freedoms, to fight against corruption, and to demand equal access to services for every citizen of Kosovo.

And Kosovo needs grassroots leaders from all communities who are not only willing to work on these issues, but who actively seek out opportunities to work together across ethnic, gender, religious, and ideological lines. There are practical examples from Kosovo’s recent history.  Last year we saw a multi-ethnic group of citizens in Mitrovica North come together to address the issue of stray dogs in their community. We also saw activists from diverse communities throughout Kosovo join forces to advocate for clean water and the protection of the environment.

Moreover, I’ve spoken before of the need for all of us to open doors to the future by forthrightly examining the past. Kosovo needs citizens to challenge politicians and influencers in all communities who spew hatred toward other ethnicities, or who deny the importance of justice for members of other groups. In the words of Ben Franklin, the early American scholar and diplomat, “Justice will not be served until those who are unaffected are as outraged as those who are.”

So as a new year begins, I encourage you to deepen your cooperation with your peers and to reach out across community boundaries. Let this be a year of new ideas, difficult conversations, and practical action.  As you circulate here this afternoon, my Embassy colleagues and I are eager to hear how we can support you in realizing our mutual goals for the betterment of all Kosovo’s citizens.

Here’s to peace, justice, and prosperity for all in 2020.